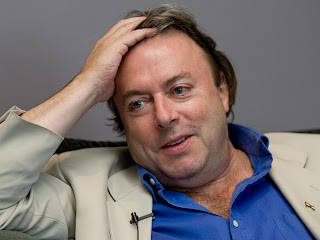 Christopher Hitchens passed away last night. If you want a decent account of his life than you can read it here or even here. Those sites do a good enough job of breaking down some of the key moments of Hitchens' life and allow you to get to know the kind of writer and man he was in his life. I'm not going to give any detailed account of his life but rather reflect on what he meant to me.

I don't know when I first heard about Christopher Hitchens, but I do remember when I first came across his book God is Not Great. I was shocked and intrigued by a title that was incredibly upfront and biting. I knew this clearly was the book of a man who wasn't about to mince words and was ready to shake people out of their comfort zone. There was no fear of offending, but rather, the title was aiming to do just that. I grabbed the book, and quickly skimmed through it. I only glossed over the book for nothing more than 5 minutes, but I still was able to notice that biting wit and elegant prose. The book was written by a talented and intelligent man, even if I knew many wouldn't agree with his agenda. I was tempted to purchase the book, but then I chickened out from the fear that the wrong person may come across the book on my coffee table. This was 2008 Christopher, and now in 2011, I know I will eventually buy the book -- I wish I had the guts then.

Despite not buying the book, I did quickly go home and did some good old fashion Google searching. I came across a plethora of essays written by him and video clips of interviews/debates. I was quickly drawn to this incredibly intellectual, witty, humorous, engaging, controversial man. I read and watched many things that I didn't agree with, but I was always entertained and challenged to think. He did hold many controversial opinions, but he was always able to back them up with well thought out arguments supported by history or social science. It is easy to be controversial or argumentative, but it takes real skill to do it with wit, humour, and elegance. I am pretty sure even his biggest critics will admit he was an entertaining, funny, and smart man.

I think most people knew who Christopher Hitchens was, or at least, they had heard about him in passing. I am fearful that many religious folks are going to choose to remember him as the man who constantly threw venom towards their beliefs. I am not denying he was a strong anti-theist, and often wrote many works opposing religion. If you look for him on YouTube, you'll likely find most the videos have to do with him debating religion in some way. It is a disservice to his legacy to only remember him in that way (not that I have any control over how you choose to reflect upon him -- even if you choose to do such a thing at all). He was a writer and a lover of literature. He had an incredible knowledge of both politics and history. He has written biographies on some of the most crucial historical figures (such as Thomas Paine, Thomas Jefferson, and George Orwell). His written works span across a wide variety of subjects. The man was well read, and knew how to write entertaining prose on almost any subject. I prefer to remember him as one of the great writers of modern time rather than just an atheist.

I have read a large amount of his works and watched several of his television appearances. I have to admit that many of his opinions have influenced some of the changes in my beliefs over the last several years. I appreciate that he has challenged me and forced me to think about many things I took for granted. But I also know there are several things that I completely disagreed with him on. Hitchens was an evangelical atheist, in many ways. He would tour across the world letting everyone know the evils of religion, especially the Muslim belief (though in the States, he spent just as much time bashing the Christian belief). He seemed to believe there was almost no value in being religious and that it was a harmful delusion. This is a point that I was never able to agree with him about, and I've always had a strong problem with the recent New Atheist drive. I think it was a great waste of his talents, because in the end, he was never going to be able to successfully convert all religious people. I don't think it would have brought the great results that he assumed it would have, either. Instead, it caused him to be seen as a villain among many religious folks, and thus they were less willing to hear the valuable things he had to say.

I believe he could have still presented his opinions and challenged people to think, without dragging along the strong anti-theist slant. Of course, that wasn't who he was. I wonder if he took a different approach, if more people would have been willing to listen. I believe one can still be Christian or Muslim or Hindu, and be able to get value from what Hitchens was trying to say. He was a huge proponent of equality, free speech, and intellectualism. He wanted people to think for themselves, and not mindlessly make decisions just because they believed some higher power told them to do it. He wanted people to question their beliefs and ask why they do what they do. His problem was that people would use religion to justify bigotry and hatred and war and pure stupidity. He preached for a noble cause, but I think his venom caused many to not be able to see his actual message. He obviously was either unaware or too stubborn to recognize that a person can keep their faith but also be intellectual and willing to question things.

I may not have agreed with his approach, but at the same time, I can respect it to some degree. Hitchens was honest. He didn't pull punches. You never wondered what he thought about something. His writing was always straight to the point, and you could walk away knowing exactly what he believed. As a writer, I can respect the fact he didn't hide anything, and I feel that was what made him such a great writer. You need to be honest with yourself, and you need to try to be as open as possible. Hitchens was most definitely those things. He was not afraid of how people would perceive him and he constantly dug to find the 'truth'. You may not agree with his version of the truth, but I know it was what he really believed. I think he got to his conclusions honestly. I can learn a lot from his honesty and lack of fear of public opinion. I believe such an approach makes you a better and more authentic writer.

I'll miss Christopher Hitchens. I'll actually miss him very much. The good thing is that his works will live on. His writing material will remain. I will always be able to remember him through his great prose. He has been a big influence on me as a writer, and hope I can even get 5% of the success he was able to achieve. More importantly, I hope I can honour him by becoming a more honest and authentic writer.
Link Media Musings News Pictures Tribute