Modern Family "And One to Grow On" Review: Touching the Heart and Funny Bone 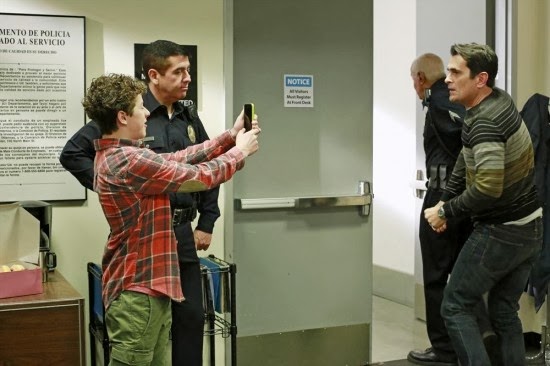 Modern Family rattled off a fairly rapid amount of one-liners and funny scenarios, but the most memorable scene was Jay (Ed O'Neill) trying to convince his 1 year old son to say daddy.  Jay has been a part of many sweet moments in the series, but he still has the reputation of being closed off and cold.  It was cute seeing him claim to Andy (Adam DeVine) that he didn't care if he was called daddy, and then the very next scene doing borderline gymnastics to hear to words called out to him.  It stood out because not only would it be something I tried to achieve from my son if I hadn't heard the words at that point, but demonstrated that even the tough on the outside father has a special bond with their son.  For a show that has been accused of resorting to caricatures instead of authentic characters, Jay is proving to be complex and layered.  It was believable that such a thing would be important to him, especially since it was done when no one was around.  O'Neill does a great job of conveying a tougher exterior, but still able to portray those rare softer moments when his character needs to open up.

It was the desire for his young son to acknowledge him that led to his next sweeter moment in the episode, when after being called "Jay" by his one year old he'd now decided to approve of Manny (Rico Rodriguez) trying to win over the cheerleader he believed to be out of the boy's league.  The series has done an effective, gradual job of creating a tight bond between the adopted father and son, but still making it feel something different than a blood relationship.  It is one of the more realistic and touching relationships on the show as Jay is still exasperated by the delusional player in a teen's body but is also constantly trying to protect him.  Gloria (Sofia Vergara) once again is more worried about Manny's immediate feelings and refused to try to get him out of his elaborate attempt to win over the cheerleader, while Jay at first glance seemed to be a buzzkill but was actually concerned about the possible long term heartache.  In an episode that had Phil (Ty Burrell) begging the cop to not drive by the trampoline shop because the town thinks so highly of him or Cam (Eric Stonestreet) and Mitchell (Jesse Tyler Ferguson) arguing over the drama of two teenage girls while sounding like them, it was the Jay and Gloria conflict over how to handle Manny that snuck in a sense of real day to day family conflict.

The thing about this series is the events often aren't realistic and the characters are over-blown versions of ideas of people, but the emotion often feels closer to what exists in family.  Even in an era where sitcoms have much more complex characters and stories are more depth, the events in most sitcoms often don't match reality and characters tend to do what is necessary to pull off the joke.  It is hard to be too critical of Modern Family's more ridiculous moment as its first priority is to be funny, but is still often able to drag out some real emotion.

The least realistic story this week was redeemed by also being by far the funniest.  Phil is dragged off to the slammer, because his daughter has many unpaid parking tickets.  I'm sure many viewers were racking their brain to see how it got to the point cops were scouring the streets for unpaid parking tickets for the car that clearly isn't in Haley's (Sarah Hyland) name, but then you'd miss the joy of Claire (Julie Bowen) trying to crack Phil's code to the hidden money.  It seems the police don't take credit cards and the fine was over a thousand dollars.  Rather than go to the bank, Claire just had to pick up the money hidden in the house.  The issue comes when Phil's time on the phone was up and Claire needed to ask him the code to the hidden money.  It appears Phil changes the hiding place to the money every month and to find the hiding place you needed to solve his rhyming puzzle.  He does this because the money needed to be hidden from the "bad guys."  I like to think all criminal are truly foiled by rhyming puzzles.  The gag seemed to perfectly fit with the Phil character, but Bowen also needs much credit as the exasperated Claire trying to save her husband but growing mad with the ridiculous game that he has sent her on.

The payoff for that storyline was surprisingly great with Haley being able to redeem herself with her parents.  Haley is often portrayed as the beautiful but not very bright daughter.  Even in this episode, she couldn't understand why the blind would be hanging out with the closet people to form the Closet and Blinds Union.  She proved to have a special kind of smarts when she made up stories to appease her siblings who were upset their parents lied to them.  Luke thought he was off to autopsy camp and was bummed Phil was actually taking him to dances classes, but Haley convinced him that dance was paramount to finding his true love.  Alex (Ariel Winter) was upset to find out Claire didn't want to teach her to drive, but was tricked into thinking the real reason was her mom just didn't want to lose out on bonding by driving her around.  It was great to see Haley portrayed as quick and more importantly, actually outsmart her genius sister.

Cam and Mitchell were stuck in the usual "Cam is upset at Mitchell" storyline.  Considering the tension was over wedding details, and I remember how insanity inducing those days were that I'm willing to accept this recent squabble.  Plus their attempt to try to track down the teen girls and convince them to share their Sweet 16 party, so that they could get the date at the hall was pretty fun.  It also concluded in a sweet moment when Cam realized Mitchell fell in love with him first and was willing to take a risk on their relationship.

It doesn't appear to be cool to praise Modern Family anymore.  I blame it on the fact it keeps winning Emmys and is a ratings giant.  It is fun to pick on the popular show.  While it does have a formula and there are times it gets a little too ridiculous, but when it hits the right balance of heart and humour it is still one of the best shows out there.  This week felt authentic and touching while mixing in some memorable witty one-liners and some great sight gags.
Modern Family Pop Culture Review Television