'Before I Wake' Trailer: And Now I Never Want Children Sleeping in My House Again 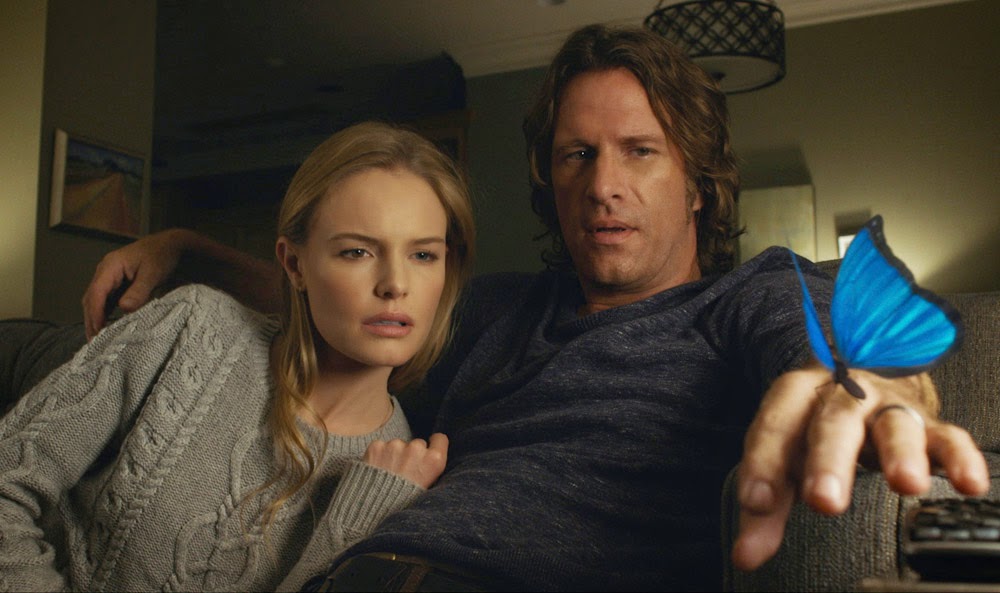 I have incredibly awesome children and I love them more than I could ever truly describe. My kids are far from perfect, but one of the great things about them is they never channel evil spirits to kill me. If I've learned anything from the Before I Wake trailer (and many other countless horror movies) is that the best way to ensure I avoid death by ghosts is to never ever adopt a child or be a foster parent.

I'm officially declaring that I'll never complain when Everett wakes me up in the middle of the night with his cries from a nightmare, because I'm confident his dreams will never get me killed from a butterfly monster attack. Why can't kids in movies dream about cuddly teddy bears or delicious meatball subs?

Most of the best horror works because it is often grounded in real-life fear that then gets represented in the story through the supernatural or some other violent form. Before I Wake actually tackles three major fears in being a new parent, dealing with the loss of a loved one, and the inability to control dreams. All three of these concepts have been explored extensively in horror cinema for decades with Mama being a strong recent example of the horrors of being a new (and in that case unwanted) parent, the Woman in Black was a great Gothic take of the pain of dealing with death, and you may have heard of a little flick call A Nightmare on Elm Street when it comes to making dreams terrifying and deadly. The first two are broader themes used in many type of movies while Before I Wake takes a rather fresh spin on the "dream are deadly" by making them manifestations that come into the real world rather than being killed in one's sleep.

The other thing that makes Before I Wake fascinating in concept is the fact the child doesn't just have nightmares but also his dreams come into reality that are not only beautiful but fulfill a deep longing for the new parents. Some of my favourite horror stories often are about something desirable, wondrous and beautiful that when opened and delved into can become hideous, dangerous and fatal. The protagonist will fight the allure and enticement in order to avoid disaster, but even with the undeniable dangers, one still plunges in. It is a pretty common theme from some of Stephen King's best work (Louis Creed in Pet Sematary tries to resurrect his wife even after the disastrous results with his son), and this trailer sort of feels like it could have been an adaptation of one of his older short stories (it isn't).

Since the boy can create images of the couple's dead son, I get feelings we might see them potentially exploit that power even though it is clearly evil at the core and will lead to their demise. This conflict is fascinating in the horror genre, because it shows that the downfall could have been avoidable but one's own inner failings brought them down. Horror doesn't often get labelled as tragedy, but many of the best works are. Even if I'm totally off on the story arc here, it is a fresh take on the currently popular possession and haunted-things sub-genre to peak some of my interest.

Unfortunately, the trailer also makes me rather wary of allowing myself to get too excited. It is riddled with some of the most tiresome horror clichés including kid being terrorized in the bedroom and folks who decide to withhold important information that could have prevented lots of problems. The biggest groaner is inclusion of several jump scares that are so well-worn that when used they only elicit laughter and frustration. Of course some demon-thing will grab the mother's shoulder, and it probably happens after only a scene ago the husband did the same. Oh shockers of shockers, there is now something behind the boy that wasn't there before. Horror works best with an unsettling atmosphere and uneasy feeling amplified by a slow-build. The jump scares often hamper the mood and end up making for an unscary and predictable movie.

There is also a chance that this picture isn't a jump-scarefest. Rather this is the work of a marketing department that is trying to sell to the demographic that they believe needs jump scares to have a good time. Maybe even some of these scenes were added in for the sake of a "spooky" trailer that will cause teenage girls hankering for a good scream and squeal to dash out to the cinemas.

I have some hope that the movie may be better than the trailer, because last year, Oculus was the victim of a pretty eye-rolling trailer and turned out to be one of the best horror movies of the year. It just so happens that Before I Wake is directed and co-written by Mike Flanagan and also written by Jeff Howard, which is the exact team that gave us Oculus.

Oculus worked in a large part due to the great direction of Flanagan. He expertly jumped from the past to the present in a way that disoriented the viewer in the exact same way the protagonist would have lost bearings from the haunted mirror. You got unsettled because you couldn't sort out what was present and what was flashback, and also playing with perceptions of reality. The screenplay and acting was also solid, but it really was the effective us of editing that elevated the material and really made things unsettling. It is that style that would also make this concept really work as one tries to sort out dream and reality. It is a concept that plays to Flanagan's strengths, but also different enough to not just feel like a rehashed Oculus. His visual sense is also incredible, and you can see signs of that in the trailer with a fine mix of beautiful and ugly imagery.

Kate Bosworth never turned into the star she was pegged to be, but she has been solid in almost everything she has been in. In the trailer she projects both a strength and vulnerability that is pretty crucial for the storytelling. Thomas Jane may not be my first choice for any movie role (and I still get him confused for Christopher Lambert far too often), but he also stars in one of my favourite horror movies from the past 10 years in Mist.

This picture is currently pegged to go wide, but it also has the unfortunate case of being slotted in the death spot that is the weekend after The Avenger: Age of Ultron. Most studios aren't clamoring to put too movies within shouting distance of what will be one of the juggernauts of the year. There is already a Reese Witherspoon comedy set to be released as well, which makes me think this picture may not end up getting a very wide release.

With some hesitation, I have interest in the picture because the concept it different enough and the director has proven his skill in the genre. The horror genre hasn't been all that exciting at the wide release level in a long time, and most of the really good ones have been independent. This has potential to change things up at the bigger studio level and provide some solid scares at the multiplexes (besides the popcorn prices).
Before I Wake Jeff Howard Kate Bosworth Mike Flanagan Movies Review Thomas Jane Trailers