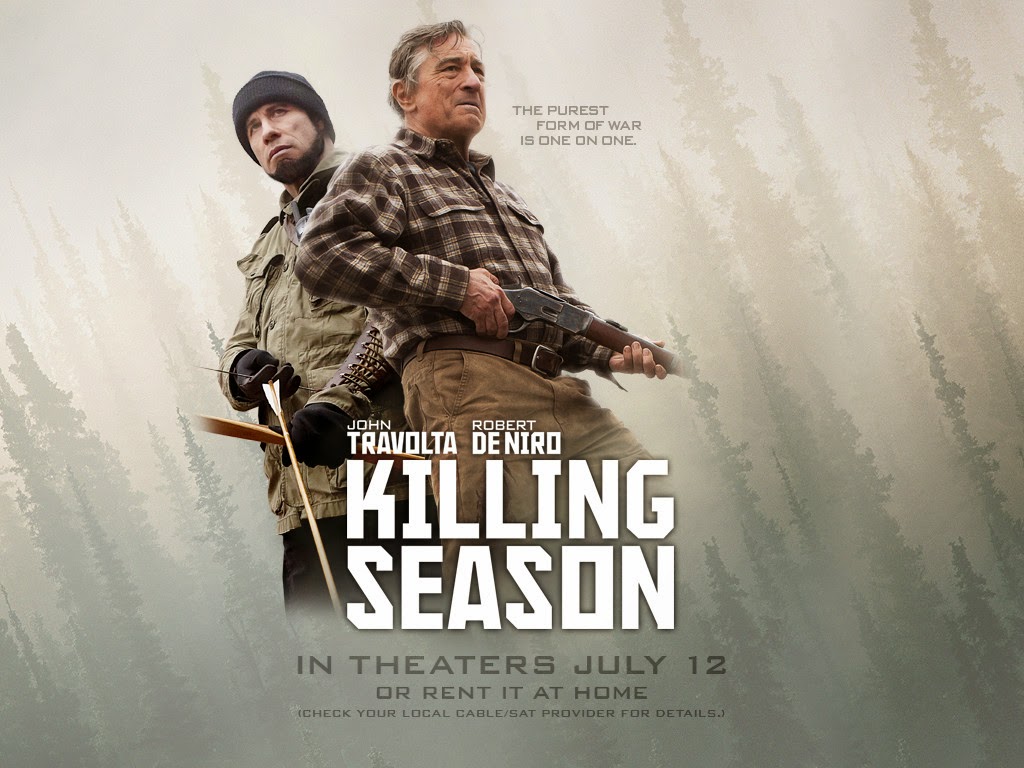 A great movie is one that strikes you deep into your gut to where you're emotionally moved and sometimes physically exhausted. This can happen from numerous components of film such as a sterling script, captivating cinematography, invigorating score, and breathtaking performances. The truly great pictures are mood changers that stick with you for days and can either cause you to be flying above the clouds or be overpowered into deep reflection. The truly great movies control our emotions and feelings.

A really awful movie can do the exact same thing. Killing Season aggressively shoved me into depression, which may not be desired but can be a hallmark of a deeply personal and powerful social movie that demands society begins to change. This depression came from the fact that two great actors (Robert De Niro and John Travolta) who were once considered superstars have fallen to the point of agreeing to star in this video-on-demand disaster.

The most intriguing part of the movie is how the two stars approach it. De Niro is clearly in this movie because the money was right and his entire performance seems to reflect a man thinking about what he will do with his new money and desperately hoping no one comes across this picture. The movie should be used for university classes about how once highly revered actors can phone-in a performance for a production they clearly didn't really have any desire or passion to be involved.

Travolta is the polar opposite as he completely throws himself into his role as Serbian Emil Kovac, who is a former Scorpion soldier out for revenge against American military veteran, Colonel Benjamin Ford (De Niro). Travolta's face has been taken over by a furry creature posing as facial hair that rivals his bizarre look in Battlefield Earth and accompanies it with an accent that is best compared to a fourth grader's attempt to imitate Dolph Lundgren with his mouth full of sandwich. It is clear that Travolta is throwing himself into this role and it would be admirable if it wasn't taken so seriously.

Director Mark Steven Johnson and screenwriter Evan Daugherty are making a deadly serious movie. Definitely deadly for anyone tricked into seeing it, because they're fans of the stars or a well-meaning relative gave it as a Christmas gift (because they know how much you love that De Niro). There isn't an ounce of humour here and it is attempting to be a thriller that gives deep reflection on the lasting impact and trials that come from war. The annals of pictures deeply exploring the psychological effects of war is filled with magnificent and masterful works like The Deer Hunter, Platoon and Apocalypse Now. Obviously, those are unfair comparisons for a low-budget thriller but this doesn't even have the complexity and nuance of Red Dawn or Behind Enemy Lines. The point is that this message isn't fresh and needs an engaging story to justify its existence.

Ford lives in an isolated cabin situated in the Appalachian Mountains where in an attempt to forget the ravages of the Bosnian War has cut himself off from everyone including his family. He comes across a hiker in Kovac who kindly fixes his truck and the two bond over drinks, but since we've already at this point seen Kovac trying to track down Ford for the purpose of revenge, we know this is all a ruse. Indeed, when they go on a hunting trip, Ford learns he is the prey and so we get an updated and far less interesting version of Richard Connell's "A Most Dangerous Game." Rather than trying to kill the man that Kovac has been lusting revenge for over a decade, he tortures Ford and unleashes an overly long villain revenge monologue for no other reason than to give an opportunity to escape. Thus the cycle begins where each guy has the chance to kill the other but instead recites an extended speech and enacts elaborate torture that ends with the perpetrator making a stupid mistake so the captive can have his turn.

The picture is bookended by the grander message of being haunted by the atrocities and inhumanity of war, but the ridiculous middle act with the cat and mouse game negates any chance of being profound and thought-provoking (though the end is beyond convoluted and forced). To get an idea of the absurdity of the movie, one of the torture scenes consists of De Niro's character waterboarding Travolta's character with a glass of freshly made lemonade that has the sugar replaced with salt. It would all be great B-movie comedy if it wasn't for being so dull and serious.

The only other small positive outside of Travolta's glorious overacting is the eye-popping north Georgian scenery that provides a beautiful contrast to the gory violence (one scene is Kovac being impaled to a door by an arrow). I got the unsettling feeling that at times the shots were actually stock footage, which is likely inaccurate but feels that way due to most of the best cinematography being wide shots that don't contain any of the characters. One scene where De Niro's character is rushing through the rapids, the shot is so wide that it could have been footage of any bobbing piece of material in the rushing river from any movie (again it was shot for this movie but there is no disputing it was clearly a stunt double or dummy). This is a small genre picture that has action scenes far too ambitious for its budget thus loses any of its impact.

Anything worthwhile in this movie has been done a thousand times better many times before. Instead the viewing experience is its own form of torture as it beats down those that were once optimistic that Silver Living Playbook would signal the revitalization for the great De Niro's career. If you don't heed my advice to stay far away even for a "throw popcorn at the screen and make an array of snide remarks" outing, you'll at least witness Travolta challenge Nicolas Cage for the crown of "once highly-respected actor go way over the top in an otherwise pointless movie."
Killing Season Movies Review