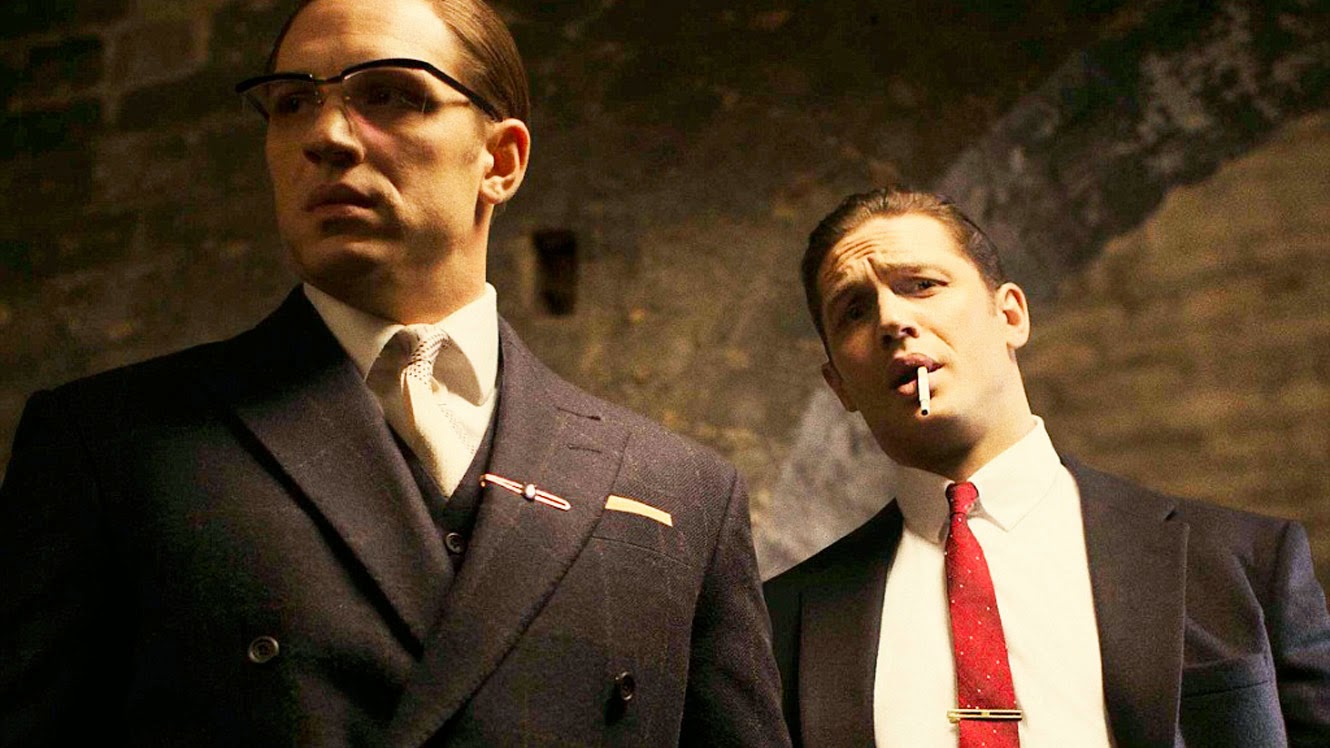 StudioCanal proves today that they aren't just tarnishing the legacy of horror classics, but they're also doing their part in clogging up the adult geared movie scene with gritty crime drama biopics. Though to be fair, I've heard of Legend being in development for a few years and just because a movie sounds familiar to several other recent releases doesn't mean it can't be distinct and great.

Based off this trailer, it seems safe to assume we won't be getting any unicorns or demonic Tim Currys. There is a story about the real life identical twins, the Kray brothers, who were gangsters ruling organized crime in 1950s and 1960s East End of London. If a movie demands charismatic toughs then they need the right actors, and it looks they've landed it with Tom Hardy and Tom Hardy. I especially approve of the Tom Hardy pick. Seriously, Hardy has to be one of the clear break out talents of the last few years who has gone from the muffled (and often mocked) Bane to Locke where the entire movies was made by his nuanced emotional turns and captivating charisma. He is now attaching himself to some of the most appealing upcoming movies that range from Mad Max: Fury Road to Alejandro González Iñárritu's latest, The Revenant.

Plus Hardy is being supported by great visual director in Brian Helgeland who has proven to be quite adept at making time period pictures feel authentic but also be full of vibrant set piece that pump life into the story. 42 was one of the best movies of 2013 and much of that came from the well-choreographed baseball scenes along with sets and sounds that felt like they were taped right from the 1940s.

You can get touches of that great visual style in this trailer. Some scenes have a crispness and sheen that feel like they came from a work of art that brings a different kind of nostalgia. It is a film with personality. A personality that also comes from a well-made trailer that juxtaposes the Hardy violence with the sweeter sounding tunes of Roy Orbison's "Running Scared." The shots and editing of the action sequences have patience but also a distinctness that makes these typical crime movie scenes stand out as something special. The car crashes and beatdowns are framed in a way that will mean something and have a long standing resonance rather than being forgotten for the next cool scene.

Plus this is also scripted by Helgeland who has given us fantastic scripts like Mystic River and L.A. Confidential and . . . um, The Postman.  If you want to be immersed into a time period and also take a complicated twist on crime then you can't get much better in the last 20 years than Helgeland (or at least, looking for someone who has the punch but is stylistically different than Martin Scorsese). Of course, this praise is coming from a teaser that mostly was just Hardy beating people up and cars crashing through walls, but it was done with whole lot of grace and cool.

It also looks to be set for a September release, which means it would be great viewing when you get tired of watching Black Mass after the fifth screening.
Legend Movies Review Tom Hardy Trailers