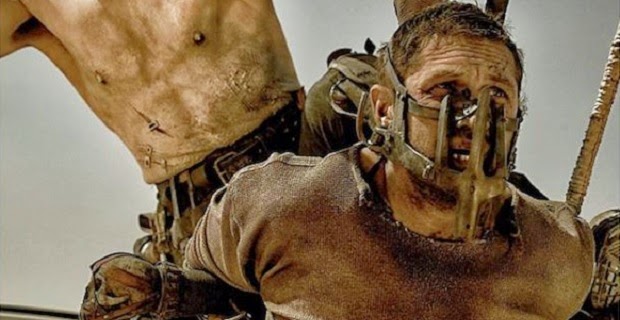 Anyone who has been regularly listening to The Movie Breakdown podcasts knows that Scott and I have been constantly gushing over the Mad Max: Fury Road teaser trailer that came out at the end of last year. This picture joins the prestigious company of Inside Out and Straight Outta Compton as the summer movies that I'm jumping over the moon ecstatic about watching and reviewing. This picture looks like an injection of fresh insanity that is desperately needed during the months crammed with slick and homogenized special effects spectacles that are often decent but indiscernible.

Compare this to something like Transformers: Age of Extinction, in both cases you have special effects and action heavy event pictures that may put visuals and style over narrative, but in the Michael Bay production you have a Skittle smear on the screen accompanied by the smashing of pots and pans compared to George Miller's production that is also chaotic and explosive but is a visually stimulating dystopia that allows you to soak in each crazy visual thus making it feel closer to a piece of abstract art coming to life. The official main trailer (the one I've been celebrating for the last several months was only a "teaser") serves up the same beautiful rendered psychosis but also gives us reassurance there is some kind of story here as well.

The story seems to be that Mad Max for whatever reason escaped and is now on the run from an army of bald and pasty white soldiers who follow a grizzly voiced Dr. Claw-sounding psycho with white '70s rocker hair and a skeletal looking gas mask. During his running for his life, Charlize Theron decides to free a bunch of young girls, because what else are you going to do in the desert, thus must join in on the escaping and running from psycho-rocker. The key point plot is they run while things explode and crash, when the time seems right, they probably fight too. A pretty typical plot for a dystopian/post-apocalyptic actioner.

Except this picture looks to be infused with an insane energy and has such masterful artistry that watching it on the big screen will likely dazzle enough that measly things like narrative and plot will be secondary. That is assuming that there isn't a more intriguing and engaging plot being hidden here or in the very least, characters that have an ounce of depth and complexity, I'm going to gamble that this movie does have more story than is hinted and the characters are going to be as fascinating as the visuals.

I love the painted landscape look of the desert and a place largely composed of just sand has never looked so beautiful. The car crash and explosions look real, even if some may be CGIed, but I'd guess it is likely a mix of modes, real vehicles and set pieces, and special effects done in post. The scenes are bright and colourful, and I've referred to it as a graphic novel come to life. It actually looks like a beautiful oil painting that was painted by a psychopath and breathed to life by Jafar (what I can say. I just watched Aladdin with Everett). This is "beautiful insanity."

The thing that makes the chaos stand out here from the typical feature-length reel of explosions and bangs is the meticulous craftsmanship of director George Miller. It feels like a living breathing world, and each act isn't a chaotic flurry of quick cuts but can be fully consumed and chewed. Each scene is finely crafted with several little morsels to gobble up and feels almost like a Pixar picture with the attention served to the backgrounds.

George Miller's directorial output has been sparse over the last three decades and he hasn't done an action picture since Mad Max Beyond the Thunderdome. This may help in it looking so drastically different and counter to every other big budget action picture over the last 20 years. It actually looks like a fusion of modern spectacles with the action pictures that were popular 30 years ago. This isn't a clone of Matrix or using the sequences of Crouching Tiger, Hidden Dragon or the fights scenes of the Bourne series, which are the three franchises most responsible for modern aesthetic and choreography. Mad Max: Fury Road avoids being dated but still acts as a throwback to past action with a modern-comic book graphic visual sense.

The scenes are accompanied by classical orchestra score that brings a class and sophistication within a world of disaster and dirt. The score declares a grand epic scope to the frenetic sequences. The stunts look choreographed and real, but also are plunged into fantasy and are gravity defying.

The trailer exposes the crazy imagination of Miller. It dares to become its own picture that no other blockbuster will be able to match without being a clone. It is the type of picture that has a maniac with an electric guitar that shoots out a flaming sword. And really, that alone should be the reason why everyone needs to see this movie.