'Blackstar' Proves Once Again the Inspiration of David Bowie 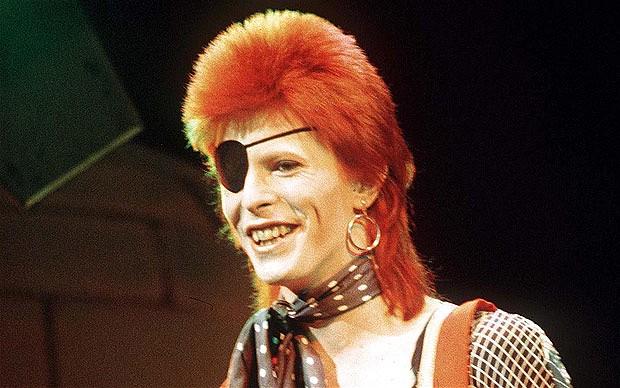 On this week's Breakdown podcast, we did a tribute to the iconic musician and sometimes actor David Bowie. I confessed on the show that I'd never had a David Bowie phase but I did recognize he likely his very own genre of music. His fans stayed loyal to him even when his styles changed and evolved over the years, which isn't something many artists can claim. He was above any specific form or style and often amalgamated many to make something new.

I also mentioned on the show that he was an inspiration. He was someone that the awkward kid or person who felt left out in the cold could look up to. He was a successful artist that was always himself and not afraid or rather embraced being different. His Ziggy Stardust persona was major proof of that but his entire life played out like an eccentric work of art.

I know there was a strong chance that his coming out as gay in the 1970s was a publicity stunt, but I also don't think it mattered what his actual sexual orientation was at the time. This was before the major rise of disco and at a time that persecution of homosexuality was still pretty rampant in popular culture. He became a symbol for a group that was ostracized. He was one of the first that showed it was brave and courageous to be who you are and be willing to come out of the closet. His most prominent relationships were with woman, but I still think he was a proper champion for the gay community. He definitely was a supporter of the community his entire career.

One of his other big moments of championing rights and diversity was in the early 1980s when he criticized MTV during an interview on the channel for the lack of playing videos by African American artists. He knew there were many talented black musicians with great videos but at the time, they weren't being played or only early in the morning. He believed it was MTV's job to showcase all talents and allow the black artists to get their chance to find an audience. It is crazy to think there was a time that even Michael Jackson didn't get a lot of air time, but it was the mind set of MTV when it first started that they had to pander to a white audience. Bowie was one of the first prominent figures that demanded change in what media presents.

I mentioned all the above on the podcast. You may have already heard my thoughts, but there was something that I forgot to mention yesterday. It is another example of how David Bowie is a great inspiration and one who encourages us to thrive for excellence.

David Bowie released his final album. Blackstar, two days before he passed away. This means he recorded the majority of the album while he was battling cancer and very sick. The man worked hard and created great music even when life was clearly tough for him. It has a happy ending because his final album has hit number one on the Billboard charts.

Bowie's entire career reminds me that I can write and continue to create even when I'm emotionally in the dumps (a place that I frequented too much the past two years) or when I fear my thoughts will alienate me. His life work pushes my writing to embrace individuality and not shy away from honesty. I must let my true heart and soul pour out in my prose and remember the truly great works are when an artist allows pieces of them to be left behind. An artist and writer must expect real honesty and revelation of self to rustle up the hive and cause some fires, but trust it is for greatness and truth.

Bowie has left behind a great legacy and I know he has given more than just great music. It has been a great time learning more about him lately.

In the next two weeks we'll be celebrating him and Alan Rickman more in-depth with podcast that are devoted to works from each man.
Blackstar David Bowie Inspiration Musings