A Novel Isn't a Sermon 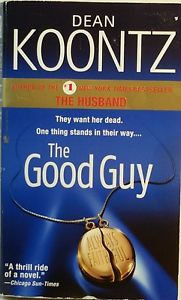 My bookshelf is filled with Dean Koontz novels, but there was an invisible rope pulling me away from picking up any of his books in the last few years. I couldn't quite peg what was the voice screaming at me to skip all those books that some I haven't even read yet. I assumed it was because I also have a large collection of unread Stephen King and his storytelling style is more my groove. A few weeks back, I decided to slice the rope and ignore the voices and pick up his The Good Guy. I was reminded that Koontz writes tight and well-paced thrillers that have a twist and mystery hovering over all the narrative to build a sense of anticipation. It is top notch fast food fiction and I want to plow through to get to the big revelations, But I've had to take several breaks where I lay down the book and look up at the ceiling as I scream out, "I get the point already!"

All I know about Koontz is from his words in his novels, but I can't shake the thought that he believes there is a "Liberal Agenda" corroding society. In The Good Guy, the protagonist, his love interest, the secondary characters, the character with no more than three lines, and even the villain all bemoan how life was so much better 50 years ago and society now is a cesspool overstuffed with selfish jerks. Every three or so pages, the novel halts its narrative just to remind us how awful everything is today. Because the 1930s and 1940s didn't have any problems with human beings getting lynched or entire nations trying to wipe out a race or anything nasty like that.

I get that for a thriller or horror novel that it is important to highlight the danger and evil to shake out the fears. The problem with this novel is when the story is rushing along, the narration or the characters slow things down to remind us how awful things have turned out. Even the anecdotes are designed to let us know how social programs and modern ideals have made corrupt and nasty individuals. Of course, parenting is lost and all kids are raised to be self-centred demons. There are side stories that exist to show how much the government and social organizations are mucking everything up, even when it has nothing to do with the story of a hitman trying to hunt down a woman.

Koontz has a message and it makes an otherwise compelling story slogged down with didacticism. It's a Sunday sermon disguised as a thriller. It assumes that the reader will nod his head and recognize the disaster that is welfare or affirmative action. If this is what Koontz believes then this is fine but why does every single character and the narration have to hammer me to the floor with that message?

It reminds me of Michael Crichton, another great writer of thrillers, who has sabotaged some of his stories by putting his message above the tale. His best stuff is when he is just telling a story, because when he has something more to say, it is a steaming mess. State of Fear is an absolute disaster that feels more like a seminar on how global warming is a hoax. The novel slows to a snail's pace several times where it presents tables and stats to prove his hypothesis. One of the main characters stops the action several times  to break into a lecture about evil corporations spreading lies of the environment or how it is okay to slash away trees. If Crichton has a message then it is almost guaranteed his novel is a shake and pound you down sermon with occasional sprinklings of story.

A novel and any fiction needs to have the story and characters as a priority. A message can't be a goal. A storyteller shouldn't go in hoping to lay out facts and crush the reader down with a message. Obviously, a writer has the things he cares about or has his ideas floating about that are bound to enter into the story. It shouldn't be the priority. It should be subtle and hidden in the imagery or a specific character. A good novel or story is one where any message comes organically and while the writing process is happening rather than the goal before the writer begins. A good novel is one that you can just read to be entertained with any themes or ideas quietly slipping in. The message or idea becomes clearer after two or three or four more readings. It allows for a much richer and rewarding experience.

It also means that I'll stop yelling at the book for irritating me with its brick against the head agenda.
Books Dean Koontz Fiction Musings The Good Guy