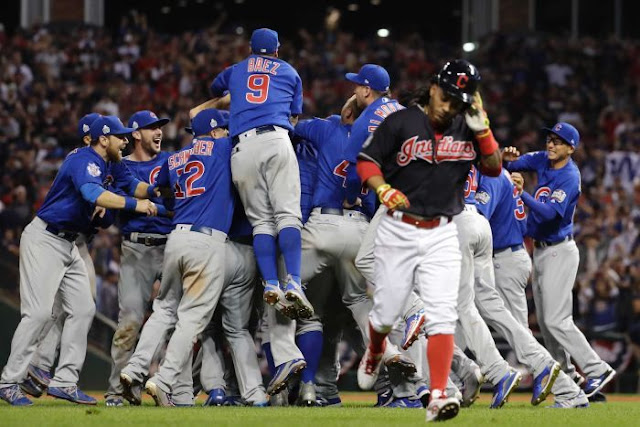 The longest running gag in all of sports is no longer relevant. One of the jokes that has showed up in time travel or other science fiction stories can no longer be used without feeling dated. The 108 year curse was shattered in one of the best and most twist-filled World Series Game 7 10 inning baseball battles ever. The Chicago Cubs are finally world series champions, which is a thing that no one currently alive has seen or the very least no person would have first hand memory about it. This also means that now the Cleveland Indians not only have to lick their wounds after blowing a three games to one lead but they now are bestowed as the team in the Major Leagues with the longest championship drought. But they also get to be part of one of the most iconic games I've ever seen and the reason that I'm going to be accidentally spreading yogurt on Everett's sandwich. It was worth staying up, though of course, I'd rather Blue Jays be in this thrilling win. Once they went to the golf courses, I knew I'd be rooting for the Chicago Cubs to finally win that elusive championship. For the last two decades Cub fans got to see Boston Red Sox, San Fransisco Giants, and even their neighbours the Chicago White Sox end several decade long droughts. Now, it is their time. History has been made and now science fictions writers will need to find a new sports joke to slip into their prose.
Baseball Chicago Cubs Sports World Series 2016