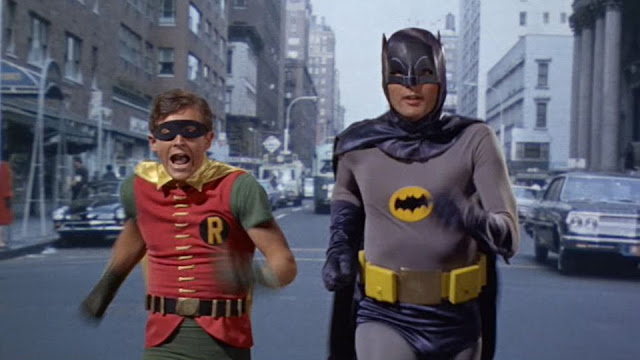 As some likely already know, Scott and I discussed 1966's Batman during our in-depth spoiler filled analysis segment on the Breakdown yesterday morning (recorded Sunday morning). During the discussion, I argued that the campy movie is less a parody of the Batman comic books and more a satire of 1960s pop culture. The movie and series is crammed with references and tropes that were popular from the time, as well as works from the past that were still well known.

What I failed to mention in the podcast but discussed with Scott in detail after the recording ended (a far too regular occurrence) that the 1960s Batman series (and to an extent the movie) was a clear homage/tribute/slight-parody of popular serials of the 1930s and 1940s. A serial was a single story that was divided into "chapters" that would air on a weekly basis (a child's Saturday at the movies consisted of one serial, an animated short or two, a newsreel, and two feature films). There were a wide variety of stories but some of the most popular were Flash Gordon, The Lone Ranger, Buck Rogers, Batman, Dick Tracy, Captain Marvel and The Shadow (and many Westerns were also popular because they were cheap to film and studios could reuse sets, costumes, and props). By the time the Batman TV series came, the serial was long gone but there would still be significant nostalgia for it.

Many of the elements that made Batman endearing was coming from those past serials such as most episodes ending on a cliffhanger, the hero about to be killed is saved by luck rather than skill, the over-the-top tongue in cheek dialogue, the made from home looking costumes, and the heroes stating a positive message directly to the audience. Back during the series' first run, almost everyone watching the Batman TV series was well aware that it was deeply indebted to the serials of the past, but 50 years later, Batman is now seen as its own oddball original that some younger audiences believe invented things like the narrated cliffhanger and the straight delivery of cheesy lines.

This isn't a criticism against the Batman series, because it wasn't hiding its influences at the time and was openingly mimicking that formula. It is more a sign how quickly the past of the pop culture can be forgotten and replaced. It is similar to how if someone is criticizing a sci-fi motion picture for being derivative than it is often accused of ripping off Star Wars, which is a film series praised for its originality and creativity. The fact is George Lucas did not hide the heavy influences of Flash Gordon, Akira Kurosawa films, the works of Joseph Campbell, and Lawrence of Arabia (to name a very few). On top of the storytelling aspects, things like the droids' look were heavily influenced from movies like Silent Running and Metropolis. Actually, early conceptual drawings show that C-3PO was almost identical to Maschinenmench (Metropolis), except for being golden and male.

I love Star Wars, and it shows an incredible imagination and an exemplar example of world building. But what gets forgotten in today's whining over lack of originality is that almost every great work is influenced by something before it. Stephen King is one of the great creative minds and novelist, but he admits his canon has been shaped by his love for H.P. Lovecraft and E.C. horror comics as a boy. The fact inspiration is evident in King's stories or Star Wars or especially '60s Batman series is not a negative, but rather just a reality that their existence relies on many classic (and not-so classic) works. The finger prints of past works are smudged over every creative endeavour. Allowing the past to help shape a present work doesn't make it unoriginal or lacking creativity, but I do think it is crucial for creators to know their influences so they can purposefully shape and craft the new work into something new. This is one of the reasons to respect the works of King or Star Wars or Batman, because in all three cases, there is clear acknowledgement that the rich history of literature and cinema and various other forms of entertainment aided in their creation.

It is sort of unfortunate how out of tune and disconnected modern audience can be with the history of pop culture. Most people today would watch the old Batman series and view it as a quirky, oddball campfest without even being aware of the existence 1930s and 1940s serials that shaped that series, just like many young Stephen King fans read his stuff without knowing the name H.P. Lovecraft. Of course, it is futile to whine how much modern audiences are unaware of past novels or movies or TV series, because that isn't a new thing but just the nature of society in every generation. One is always more interested in the now than the past, and only a few chosen works really stay embedded in the evolving zeitgeist.

This is why modern artist like JK Rowling or David Robert Mitchell or Quentin Tarantino or yes Stephen King (he has been around long enough I get to use him in both situation) are so important because they are aware of past and often pay tribute in creative and fresh ways. Someone like Tarantino actively champions the past and will point his biggest fans to what he sees as defining works.

Their originality comes from taking those homages and past ideas while incorporating their own life experiences, their fears, their varied interests, and daily observations. A creator is able to be aware of everything around them and formulate every tidbit they encounter into something entirely new and exciting.

But now, I've got carried away, because this was meant as a short addendum to the 1966 Batman podcast. My point in all this is that something can be its own thing and be green leafy fresh, but still be reliant on the past before it. In creative circles, originality is making something exciting and innovative out of old and well-worn but still sturdy parts.
Batman (1966) JK Rowling Movies Musings Stephen King