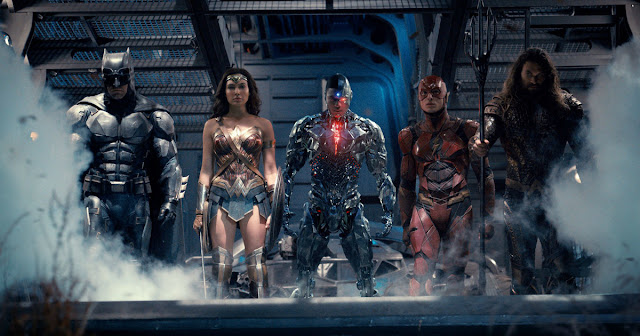 I'm not anti-DC Comics movies. Honest. One of my all-time favourite trilogies is Nolan's Dark Knight. I really enjoyed the first two Christopher Reeve starring Superman flicks, and I have high praise for Tim Burton's Batman. And I so badly want to praise and love DC's offerings this years. I'm willing to just let Man of Steel, Batman v. Superman, and Suicide Squad to be things of the past. Let this be a big fresh start with Wonder Woman and Justice League. But the big trailer for their super hero team-up extravaganza that Warner Brothers has been hyping all week, leaves me pretty flat and does little to get me excited for what is to come in November.

I still love Ben Affleck as Batman. I enjoyed him through the entire trailer and I love his deadpan delivery of his comebacks. There looks to be a pretty fun chemistry between him and the Flash. I like that the League aren't drinking buddies but the issues are handled in a more playful and comedic fashion. There are hints that this movie actually wants to be fun.

I also dig that Superman was left entirely out of the marketing this time. Every single movie goer knows he will be resurrecting and saving the day, but save that moment for the movie. Make us start to doubt that Superman is coming back to life (even though past marketing material spoiled it and well, they aren't doing this movie without Superman). I actually appreciate a trailer showing some restraint.

My biggest problem with this trailer is the visual aspects. What is Zack Snyder's obsession with this grey steely blue tinge that has to overwhelm the cinematography? There are a few scenes where actual colour sneaks through, but it is again a dark and grim appearance. It is a dated style and gives the movie a feeling of being sterile and cold. Where is the life and soul? Guardians of the Galaxy proved how a diverse colour palate can do much to increase the energy and feel of a movie.

The other thing is the special effects look like a work in progress. Cyborg is something from a Wii game and a few sequences are pretty clearly making heavy use of the blue screen. My criticism of this franchise has never been the special effects, so this must be an issue of unfinished scenes that needed to be rushed out for advertisement purposes. The special effects are not a deal breaker as there are still several months left for post-production work.

The big key for this to be the critical hit that Warner Brother's needs is Zack Snyder surprising us by not resorting to exploding everything without a story purpose. And making sure that story is intriguing, and more importantly, having some interesting characters in believable relationships. This is the kind of stuff they don't tend to show off in trailers, so we will have to wait until the big release day for that answer.

I can say that this trailer did get a smirk from me when Barry Allen asked Bruce Wayne what was his super power and the response was he was rich.