Barbarianism is No Old Man's Game 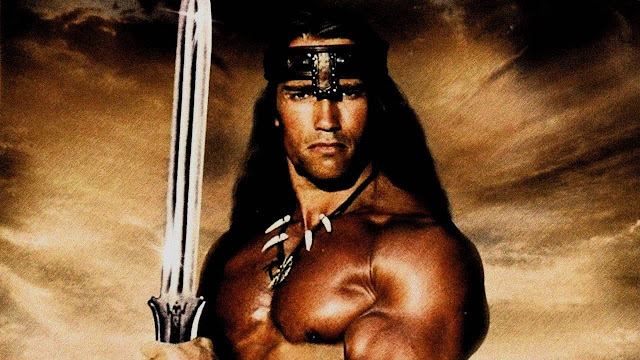 During his promotional tour for The Fate of the Furious, screenwriter Chris Morgan revealed in an interview that the script he wrote for the now dead Legend of Conan movie was to be a fantasy epic version of Clint Eastwood's western classic, Unforgiven. The idea was for it to be set 30 years after the events in Conan the Barbarian and Arnold Schwarzenegger would be still taking on the title role. This time he'd play up the fact that he is now much older and far removed from when he was a world beating warrior. He is confronted with some kind of mission but his skills have deteriorated so he needs to use his wits and smarts to conquer the evil. Much like Eastwood's William Munny, the years had softened his killer instinct and no longer has the hunger to slash and maim (or essentially be a barbarian).

The original Conan the Barbarian movie is the lone entry of the franchise that is really watchable. It makes sense that was the only one Morgan wanted to connect with his story. I also appreciate he wasn't trying to just do yet another reboot or even make a mainstream appealing type movie. The story drove his screenplay.

Of course, that is the very reason we don't have this movie and the screenplay will be buried six feet under. Studios don't see a story about an older man trying to come with terms with his past as box office gold. Plus Schwarzenegger already flopped in his old man action movie, The Last Stand, which also harnessed elements from the Western. And Conan doesn't scream prestige picture so they can't even sell it as an awards getters. It would only be approved with a miniscule budget but it would need to be significant to pull off the set pieces and wardrobe for a good-looking sword and sandal epic.

Though, the story of a former hero near the end of his time that has more drama and emotional depth mixed in with violent action sequences is what we got in Logan. A lot of what makes this a fascinating picture has already been delivered but without the bear skinned shorts. Though I would be open to a lot more movies that have the heart and emotion blended with action and violence of a Logan.

If I had to predict, with the franchise obsessed movie studios we will be getting another Conan within the next fifteen years, but I'm afraid it will be the typical origin story crap we get shoved down our throats with these kind of movies.
Arnold Schwarzenegger Conan the Barbarian Movies News