'Thor: Ragnarok' Trailer Channeling the B-Movie Spirit of 'Guardians of the Galaxy' 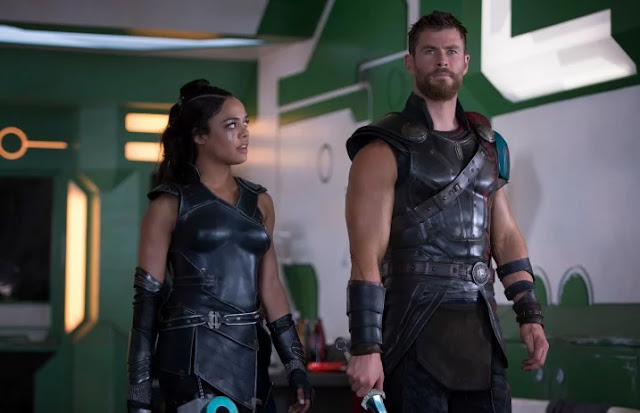 Of all the Disney owned Marvel Studio franchises, Thor has always left me a little flat. I wasn't blown away by the original and even though being deep into paid film criticism at the time, I passed on the sequel. Part of the reason is Thor comes off as a self-entitled man-child who knows the throne is destined for him and pulls a tantrum when it doesn't work out. They've attempted a character arc for him, but he still feels like a muscled up silver-spooned teenager. It has made it hard to get behind movies where he is the lead, but he has turned out to be a great and fun supporting player in the two Avengers flicks.

This piece was initially going to be how I will be going into November ambivalent towards the two big tentpoles in Thor: Ragnarok and Justice League, but this pesky trailer changed all that. Ragnarok is channeling the charm of Guardians of the Galaxy with bright, Skittle sprayed colours and a high energy (tongue-firmly-in-cheek) B-movie tone. It really looks to be different than the other Avengers spin-off movies and has an old-school drive-thru theatre vibe. Chris Hemsworth's sense of humour and charisma is being used to full effect and in a little over a minute I am on Team Thor.

The cast looks terrific with Cate Blanchett having fun as the villain Hela, and Jeff Goldblum has enough campy movie experience to bring a proper hammy performance to the Grandmaster. Tessa Thompson was a stand-out in her role as the love interest, Bianca, in Creed and I'm excited to see what she will bring here, as the trailer hints her role is significant.

I have a lot of faith that this will be able to pull of the big budget B-Movie spectacle with irreverent humour, because Taika Waititi helmed last year's high energy and very funny Hunt for the Wilderpeople (it is on Netflix and you must see it -- one of the best of the year). He knows how to balance quirk and wackiness with poignancy and heart, and so I trust him to make this movie something special.

I also love the bit where Thor tells the bloodthirsty audience that his opponent is a friend from work, though Hulk doesn't seem to care about that.