Not Great Past Few Years for Neill Blomkamp's Career 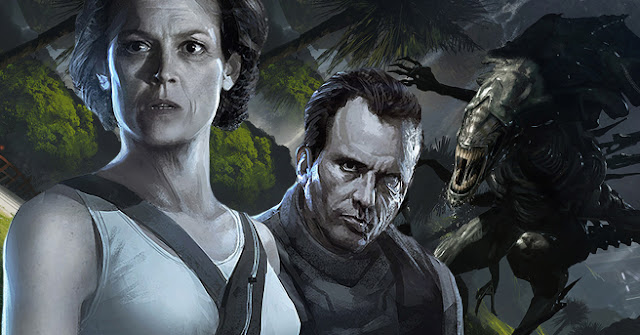 Back in 2015, Neill Blomkamp revealed some sketches online that essentially was the start of a pitch for a new Alien movie that would have been a rebooted follow-up to Aliens that involved Ellen Ripley and Corporal Dwayne Hicks. This led to him creating a 10 page story outline that earned the green light from 20th Century Fox. But then his next movie Chappie was released, and shortly after Ridley Scott changed his tune from a Prometheus 2 that focused on the Engineers to Alien: Covenant along with claims of three more sequels after that.

It would have been a tornado of confusion if Fox went ahead with two separate Alien franchises; one that was a prequel to the original Alien and another that was remake of the events after Aliens. It was pretty clear that there would only be one of these movies going forward and talk about Blomkamp's version has been silent ever since the box office failure of Chappie. Sadly, Chappie would be Blomkamp's second straight box office disappointment with Elysium missing the mark as well.

It came down to a showdown between the director who gave us Blade Runner, Alien, The Martian, Matchstick Men, Black Hawk Down and considered an icon in the industry against the director who has been struggling for another hit since his really great feature debut, District 9. The winner was obvious for a long time, but Scott has announced this week that Blomkamp's movie is off the table now. He kind of said it in a way that you sense he was annoyed that the idea was even being entertained and was always out to kill it. It almost makes me think that Blomkamp's idea may have even been the catalyst for this next movie to have the Alien name and focusing back on the xenomorphs again.

The reality is that even if Chappie was a hit, Scott deciding to do more Alien movies would have still been the kiss of death for Blomkamp. There is too much risk of market confusion by having separate timeline Alien movies going on that the same time. If both were intended to be franchises then there also would have been the risk of over saturation.

It is just another kick of dirt in the face of Blomkamp. Sure, I didn't like his last two movies by any stretch of the imaginations (I would almost say I despised Chappie), but I am not willing to say he was a one hit wonder yet. District 9 was so good that Blomkamp still deserves a chance to helm a major sci-fi franchise or at least get to do a movie with a large budget. Not sure if it will happen, but the reality is his track record isn't as bad as some may want to claim.

Ridley Scott is considered one of the all-time great directors but he still gave us duds like Hannibal and Kingdom of Heaven, and outright really bad movies like The Counsellor and Exodus: Gods and Kings. Everyone has their misfires, you could say my blog is perfect example. Also Martin Brest who gave the world the original Going in Style, Beverly Hills Cop and the fantastic Midnight Run also helmed a movie so awful he has been in hiding ever since in Gigli.  An artist can't be judged by their failures, because allowing such things shows their bravery and attempt at trying new things. Every creator has a failure, or otherwise, the creator just didn't try hard enough.

I hope this little roadblock doesn't end up being the vanquishing of Blomkamp from the mainstream scene. I hope very soon he will announce his next project and reignite the fire shown in District 9.
Alien: Covenant Aliens Movies Neill Blomkamp News Ridley Scott