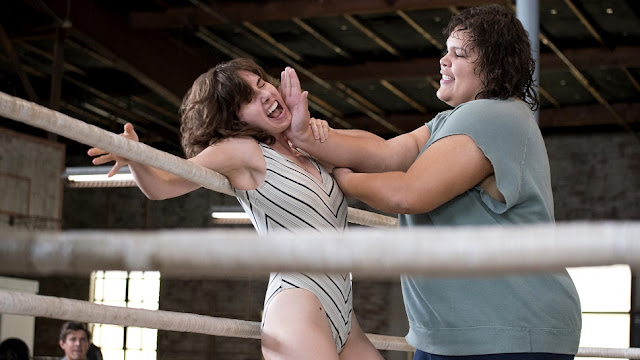 I don't think GLOW (Gorgeous Ladies of Wrestling) was available in my area when it was running the second half of the 1980s, though I do remember seeing a GLOW VHS case at the Jansen's Video store. It was later that I found out it was a campy wrestling promotion that was filled with largely actors, musicians and stunt women with no wrestling experience trying to use the syndicated show as a way to break into show business. The storylines and gimmicks on the show would have made the very cartoonnish WWF seem progressive. It was campy and goofy and filled with awful wrestling, but it had a cult following. While I never saw GLOW, I did see David McClane's early 2000 attempt to launch a similar in style all-women's wrestling promotion with WOW (Women of Wrestling). I did see that promotion's very campy and ridiculous presentation (though admittedly had its trainwreck charms).

Netflix is launching a series about the 1980s GLOW, and it looks like it is being played for comedy. From what I know about the promotion, it also looks like this show is going to be heavily fictionalized while also still showcasing what it was all about. Hopefully, this isn't one of these shows that tries to make it look like it was more successful than it really turned out to be or that it was some kind of great achievement for women's wrestling (it probably actually reinforced stereotypes and harmed the perception in North America). The new trailer looks like it will be kind of fun, and the best part is it is a starring vehicle for the very great Alison Brie.