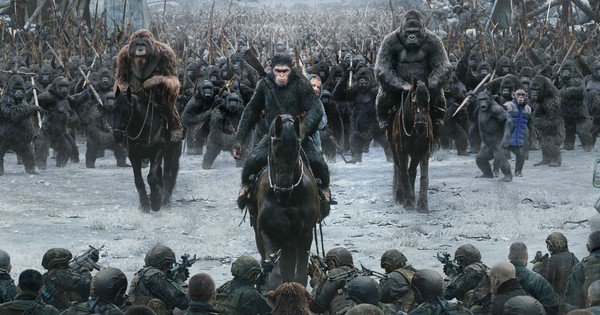 The latest War for the Planet of the Apes trailer is less actual trailer (we already got what was hyped as the final trailer a few weeks ago) and more a piece of PR marketing to announce a partnership between 20th Century Fox and the Jane Goodall Institute. The marketing shows clips from Dawn of the Planet of the Apes along with brand new footage from the upcoming picture. There is a strong chance the scene selection was more just a way to show "compassion" and humans in harmony with apes. But my movie writer senses are tingling, and I have some feeling that this may be some foreshadowing to bigger story elements for Fox's summer tentpole. It definitely reaffirms the little girl is going to be a major part of the movie and will drive the narrative. She also should be connective tissue to the 1968 original (this is supposed to be a prequel to that, right?).

A part of me thinks there was a strategic reason for showing Woody Harrelson staring at a photo, the girl caring for Ceasar, and the Dawn leads of Keri Russell, Jason Clarke, and Kodi Smit-McPhee. It looks like it is alluding to a connection between all those individuals. Maybe the girl is the daughter of Harrelson's mad general, while Harrelson is McPhee all grown up. It would be interesting for a character who was compassionate and an ally of Caesar to grow up bitter due to losing parents or some other similar tragedy. I know this movie is set many years later, so definitely enough time for McPhee's character to grow up, and I don't see why everyone from the past film has to be dead.

I also dig the compassion theme of the trailer and hope that is a reflection of the movie. Something about how bridging understanding between the two groups is important, and how this battle is a great tragedy. A little bit of hope and reaching for love amongst the violence and chaos. It doesn't need to be preachy, and the previous two were very solid at having a message but still doling out the blockbuster everyone came to see. You can have fun and smarts, and usually, a smart movie is far more fun.

Movies Review The War for the Planet of the Apes Trailer