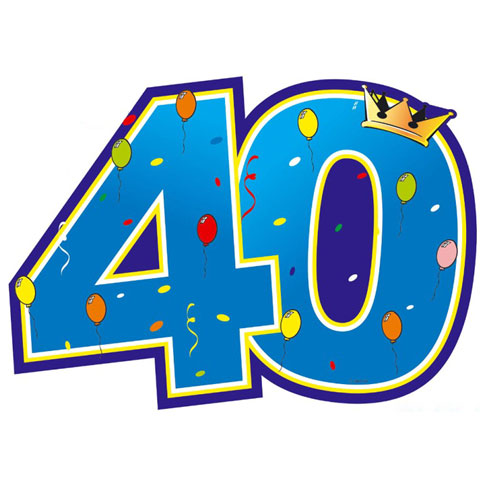 The average life expectancy for a Canadian male is 80 years old, which if I follow that, means I am have now lived half of my life. Now, if my body decides to follow my grandmother, I would still have another eight more years before reaching my life's midway point (and I would start looking better in flowery dresses). Of course, a weather satellite may fall on me next week and I would actually be near the end. But 40 years old is a lot of living and seems to be that age where one reflects a little on one's life and what has been accomplished.

A lot has happened during my lifetime. A chubby lasagna loving cat was really trendy on posters decrying Mondays. There was an animated series about a sword wielding cat and his feline friends battling other anthropomorphic animals and their blue mummy ruler. Facebook arrived to be an easy place to find funny and cute cat videos. Personally I once woke up to a cat horking up a hairball on my comforter. Plus there was lots of events not involving cats that probably happened too.

I'm at this stage where my brain is jammed with personal memories, but only a few really remain vivid. Most of them have likely been distorted due to my creative writer brain. At least it means what remains is more interesting so it makes it easier to accept them as the new reality. No matter how truthful are those memories, I trust the emotions and feelings remain honest.

My career isn't what I would have expected when I was 12, but at the time, I thought I would be a sports broadcaster. Not really sure when that stopped being my big dream, but I do know even as far back as 6 that I carried around a notebook full of stories and poems. Writing was a thing that I always loved, even if I had not seen it as what would be my job. I also know that a goal for as long as I can remember was to have a novel published.

At 40 years old, I don't have that published novel, no screenplay being picked up by a big studio, or a locked in job with a major magazine. But I have written stuff that went viral, wrote one off articles to major online outlets, and once was a strong candidate for major position with a New York entertainment publisher (of course, less discussed the better, as the end result still haunts me).

My greatest accomplishment is all the amazing relationships over the years. I am blessed to say I still am good friends with my childhood best friend. I have maintained close relationships with friends that I made in high school. It is great to still have a connection with people who have seen me grow and change, yet still like me. I can say 40 years has been more than enough time for me to really love and appreciate my parents and siblings who get even greater as the years go by.

My greatest relationships are with the three people that greet me every morning. Sure, two of them grunt at me instead of say "Good morning", but on a daily basis they promise me love, laughter, and adventure. They are my ultimate inspiration. Emily, Everett and Danika are my family, and their smiles are a greater treasures than any success I may obtain with writing.

This has gotten rather sappy, but maybe that is what 40 is about. Ignore the regrets and avoid dwelling on the failures, but hold close to what really matters.

I hope I have 40 more years. Though if I can be choosey, it would be cool if this sore neck, wonky hip and creaking knees took a break for the next 30 years or so. The exciting thing is how much everything changes over such a short period of time. Seven years ago I didn't even have kids. Fifteen years ago I was still single. Thirty years ago I thought Alf was brilliant storytelling. Maybe in 10 years I'll be living on the moon and have the ability to transform into a tiger. You just never know.

The past 40 years did not turn out the way that I expected, but I wouldn't change it a bit. Here to 40 more, and thank you to all that have made the first 40 so spectacular.
Musings My Life