The Positive Preview of May 2018 Theatrical Releases 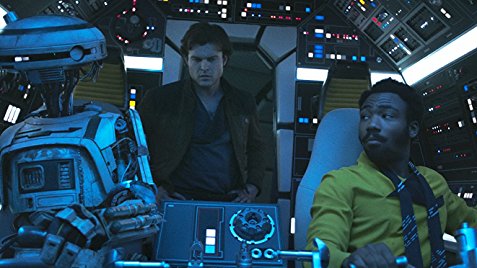 May has traditionally been the month that kicks off the summer movies season that has all the big studios releasing their big movie events. But Avengers: Infinity War came a week early and went on to break the record for highest domestic opening weekend. Despite that major event, the movie studios have not decided to cancel May and are going to keep on releasing movies. May looks to be an interesting one with a pretty diverse slate that has the big franchise movies, some comedies, a few thrillers and even some smaller geared towards adults pictures. Now, not all of them are going to be good and some may even be awful, but since they are sight unseen at this point, I have decided to give all the new releases the benefit of the doubt. I am going to list all the major releases of May 2018 along with a positive comment about each movies' potential.

Bad Samaritan (Electric Entertainment): This reminds me of the very chilling thriller Don't Breathe where this time we once again see an unsavory type break into a home where the owner is even more dangerous and hideous. Except this time, rather than it being one night the lead looks to be stuck in a cat and mouse game that spans days or weeks while also trying to solve a mystery of the missing girl. I like thrillers where the lead starts out not being so reputable but needs to rise and become a better person while also not dying, this looks like it could be fun and creepy time.

Overboard (Pantelion): Watching the trailer of this gender-swapping remake of the Goldie Hawn and Kirk Russell starring 1987 comedy, my mind started to drift to thinking about another movie, Keanu that had Anna Faris in a brilliant and hilarious cameo as herself. Faris can be really funny when in movies with good scripts. I think, I may rewatch Keanu this weekend.

Tully (Focus Features): I love previous Jason Reitman and Diablo Cody team ups in Juno and Young Adult, I love the wit and characters and how the places were lived in with those movies. Both Reitman and Cody don't seem to have the acclaim now that they did when they collaborated on those movies, but this looks like a very raw and funny look at modern motherhood and family. Plus Charlize Theron and Mackenzie Davis are heaping cups of absolute awesome, so this may be one of the true stand-out movies of the summer (so of course, it isn't released near Brantford this weekend).

Breaking In (Universal): "I'm just a mom. You have no clue what I'm capable of." Simply put, it is Gabrielle Union kicking bad guy butt to save her kids. I have a huge soft spot for b-movie-ish thrillers where an average person is forced to rise up against baddies and this trailer looks like a blast. Plus Gabrielle Union being back on the big screen is always a great thing.

Life of the Party (Warner Brothers - New Line): I still find Melissa McCarthy hilarious and she is one of the very best at physical comedy right now. There are little hints here that she may not be playing the same character she has done a billion times and playing someone who is a bit more sophisticated and smarter. Plus it has great actresses like Gillian Jacobs and Maya Rudolph in supporting roles. I am also glad they showed restraint and didn't just market this as a Back to School remake.

Revenge (warning the link is to a very graphic trailer) (Neon): It looks like the type of bloody, dark, violent revenge tale that would have had midnight screenings across North America in the 1970s, and so it shouldn't be surprising this was a huge hit at the genre film festival Fantastic Fest. It now stands at 92% on Rotten Tomatoes. It is a subversive and gory tale about female empowerment where the seemingly ditzy girl finds out her boyfriend is a jerk when he and his buddies try to kills her, so now she is going to make them pay, This is clearly a not for everyone movie but looks to be a hit for fans of violent and dark horror-ish thrillers.

Book Club (Paramount): It is great that talented women like Candice Bergen, Jane Fonda, Diane Keaton, and Mary Steenburgen have landed a big studio movie. Plus you now know where you can take your mom out this weekend.

Deadpool 2 (Fox): I'm not one for hyperbole but this will be the greatest movie ever created. No big deal. I loved the original, which was irreverent, hilarious, action-packed, but also really sweet. Ryan Reynolds finally got the role that he is perfect to play and I kind of wish they would make a million of these, if only because we keep on getting a great marketing campaign every time. Reynolds has stated there may not be a third one, so expect some really big stuff to go down to pay off stories and likely set-up the X-Force franchise. Plus it is the comic book movie that gives the long-awaited debut of Peter.

First Reformed (A24): I always love when an actor goes against type, so I am really intrigued to see Cedric the Entertainer in a very dramatic role. The story of a former military chaplain (Ethan Hawke) who is recovering from the death of his son is then faced with information about a potential attack by a radical environmentalist group is one that sounds like it could go down typical thriller routes but the trailer shows a deep and reflective movie that is more focused on the characters and their internal struggles. Always great to see Amanda Seyfried as well. This looks like it could be worth tracking down after getting your fill from the bigger studio fare.

Solo: A Star Wars Story (Buena Vista - Lucasfilm): We have all heard about the behind the scenes drama and everyone can admit we didn't need a Han Solo origin story, but come on, it is Star Wars and we are all going to see it. The visual look fantastic and Donald Glover as Lando Calrissian is genius. Plus Ron Howard will never stop being the filmmaker who gave us stuff like Rush, Cinderella Man, Apollo 13 (space!), Parenthood, Cocoon, Splash, and Willow (no, I haven't watched it since 1988, why?).

How to Talk to Girls at Parties (A24): The movie is a mix of coming of age tale set in 1977 punk era London, a fish out of water story, a love story about star-crossed lovers, and of course, an alien invasion adventure. There is a little bit for everyone. Plus it is based on a great short story by the terrific writer Neil Gaiman and has what looks to be a stand-out performance from the also very good Elle Fanning
Bad Samaritan Book Club Breaking In Deadpool 2 First Reformed How to Talk to Girls at Parties Life of the Party Movies Overboard Preview Revenge Show Dogs Solo: A Star Wars Story Trailers Tully