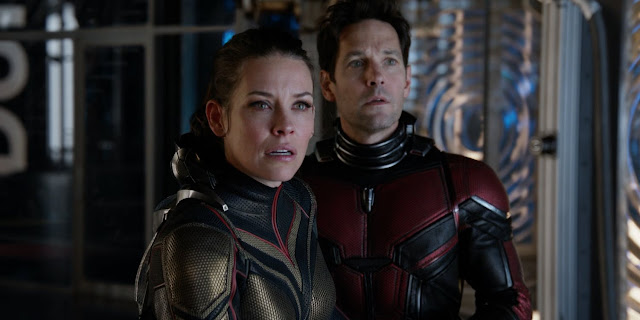 We are plunging deep into the summer movie season, and even though all the really huge summer movie events have been released (Avengers: Infinity War, Deadpool 2, Solo: A Star Wars Story, Incredibles 2, Jurassic World: Fallen Kingdom), there are still some hotly anticipated movies coming our way. Not all the movies coming out in July can be winners, but I can at least try to be optimistic before they're released. Here is my strictly positive preview of all the major releases scheduled for July As always, avoiding negativity is a lot easier for some movies than others.

The First Purge (Universal): We've all been there, we're having a nice, refined dinner party and then some oaf bellows out, "But how did the Purge even become an annual event?" Well, you now have this movie to distract him.

Ant-Man and the Wasp (Disney/Marvel Studio): The original was a really fun surprise that made great use of Paul Rudd's charm, and had enough humour and an intimate story to make it stand-out from the other movies in the Marvel Universe. The early reviews are promising this one will be more light and breezy fun, plus we thankfully get way more Evangeline Lilly.

Sorry to Bother You (Annapurna Pictures): A comedy that is trying something new with a black telemarketer that starts becoming more successful and rising up the company after discovering his "white man" voice (or more specifically, the voice of David Cross). If that isn't enough to garner intrigue, then it stars the always entertaining Lakeith Stanfield and has a supporting role from the just as incredible, Tessa Thompson.

Whitney (Roadside Attractions): Whitney Houston is one of the most iconic and popular musicians of all time, and early reviews seem to hint that this is an in-depth documentary that all her fans will want to see.

Hotel Transylvania 3: Summer Vacation (Sony/Columbia): By this point your kids have been home for two weeks, so this can at least afford you almost two hours of peace.

Skyscraper (Universal): It gives off the vibe of an old-school 1980s one-man army type action picture, but also may even give a little shine to the wife as Neve Campbell gets a few action moments in the trailer. Plus who doesn't want to see bionic Rock battle bad guys, fire, and gravity? I sure do.

Don't Worry He Won't Get Far on Foot (Amazon Studios): Gus Van Sant is always a filmmaker worth getting excited about, and when he is at his best then we get movies like Milk and Good Will Hunting. He has an amazing cast in Joaquin Phoenix, Rooney Mara, Jonah Hill and Jack Black that all seem to have meaty and nuanced characters to really take advantage of their talents. Plus I am always a sucker for stories about how creativity helps one overcome extreme challenges, and this seems to have enough sharp wit and edge to balance out the sentimental elements.

The Equalizer 2 (Sony/Columbia): This is Denzel Washington's first ever sequel, since he has been clearly picky about that sort of thing, there should be confidence that there was a story worth him coming back. He also has a pretty solid history with Antoine Fuqua with the great picture Training Day.

Mamma Mia: Here We Go Again! (Universal); The original movie came out 10 years ago, which means Pierce Brosnan has had ample time to practice singing in the shower.

Blindspotting (Lionsgate/Summit): The best way to tackle modern social issues in a movie is to have an entertaining and complex story. This tale about a former convicted criminal witnessing a police shooting an unarmed black man is obviously relevant but also looks to have humour, strong performances, nuanced characters, and even some intriguing thriller elements. It has an obvious message but it is wrapped in an ambitious movie.

Mission Impossible - Fallout (Paramount): It is the movie that caused Superman to have a CGIed upper lip, because you just can't shave the stache. If that isn't enough to stir up excitement, then this has been a franchise that consistently delivers the most exciting and thrilling stunt-filled spectacle movies of the last several years. The stories have always had some great twists and interesting characters, and this one feels like a big culmination that they've been building towards, even if Jeremy Renner is absent due to being too busy playing Tag.

Teen Titan Go! To the Movies (Warner Bros.): If you ask Everett, this is the biggest movie of the summer.

Hot Summer Nights (A24): You need a coming of age story in the summer and this one takes an interesting dark take about a boy who starts selling weed and getting mixed up with some shady characters. The lead is owned by current 'it boy' Timothy Chalamat and he has a great romantic lead in Maika Monroe, plus any movie is worth seeing when we have a William Fichtner in it as well.