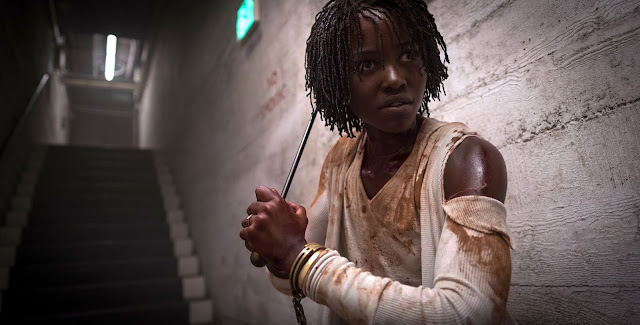 In pretty big news, Us exceeded box office expectations by earning around 70 million this weekend. Most experts had it earning around 50 million and Scott had it at 60 million, but it turned out to be a much stronger draw for audiences. It now has the third highest grossing opening weekend for a horror movie (behind It and 2018's Halloween).

This huge win at the box office proves a few things. Horror is really hot right now and though not any horror can draw out a big audience, if it has an interesting concept and solid critical buzz than it will likely exceed expectations. It helped that we haven't had very many horror movies getting a major release this year, so there was a hunger.

The thing that really helped is that this was Jordan Peele's follow-up to the very successful and popular Get Out. After only one movie. Peele's name means something, and audience were eager to see what he'd do next. I think it is safe to say that at least for horror movies, Peele has become one of those elite directors where his movies generate buzz and anticipation on his name alone without even knowing the plot or premise (great company along with Christopher Nolan, Quentin Tarantino and Steven Spielberg).

Another big thing to take away from this is that all the main leads were black. Once again, the myth that a movie with a largely non-white cast can harm the box office has been disproven. Us gets to join hits like Black Panther, Crazy Rich Asians and Aquaman. Diversity is proving to only help box office rather than harm it.

One of the cool things about Us is that the movie could have had a family of any racial background be in the lead. It could have been white or Asian or Hispanic, so it was great to see a movie that could resonate with any group but not go with the default white family. It is made cooler because Lupita Nyong'o was incredible and is one of the best actors going right now.

The other significant news coming out of the weekend box office is that Five Feet Apart in its second weekend grossed around 8.7 million for fourth place. This is a big win for those who want a variety of movies and genres to make it to the multiplexes and not just big event movies. This doesn't seem like a lot of money, but it was only a 30% drop from its opening. This is significant to mention because most movies experience a second weekend drop by 50 to 60%. In the current environment of social media making movies become old news after one weekend, the drops are often even larger.

While Five Feet Apart isn't a box office smash hit, it has proven to have some legs and maintained a decent audience. This means this movie will likely make a nice bit of change off what I assume is a modest production budget. Hopefully, this helps studios realize that smaller, character driven stories have value. I didn't recommend Five Feet Apart, but I do like there being a variety of movies available and I also know there were people who had a great time with it. Tear jerking dramas used to be regular theatrical releases and having a few a year allows for there to be a more diverse slate to appeal to different audiences.

Definitely a great box office weekend for those that want the studios to see that you just don't need super heroes or well-known brand names to get out audience out to the theatres. Hopefully, studios pay attentions to what succeeded this weekend.
Box Office Five Feet Apart Jordan Peele Lupita Nyong'o Movies Us