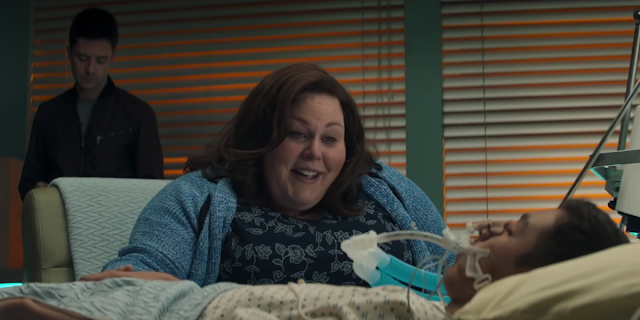 It is the first weekend where the newly Disney merged version of Fox releases a movie and this one is the Christian film, Breakthrough. It isn't going to be a Disney-sized hit, especially compared to the box office juggernaut plowing its way into theatres next weekend. Like the other two new releases this weekend, it should have a specific demographic that is interested in checking it out. Unlike the other two releases, it didn't make its way out to Brantford, so I can't support its box office dreams. I can send you off to Scott who analyzes the three new releases' chances for box office success.

Last weekend was busy at the box office, with four films hitting the screens. This weekend has three, and perhaps one of them may be mighty enough to take over first place from Shazam! It is going to be a tight race for first place, as the DC superhero actioner faces a faith-based film, a Disneynature documentary, and a horror that is relying on name dropping James Wan and The Conjuring franchise.

Fox is looking to capitalize on Easter weekend by releasing the faith-based drama, Breakthrough. At the end of March, Pure Flix’s Unplanned performed better than expected, and I have a feeling that Breakthrough is going to do even better. One reason for that is because of a much wider release, screening in well over twice as many theatres as Unplanned. Add onto that the religious nature of the weekend, and there is a small chance that this could be the best of the newcomers. (Christopher: Also coming from a bigger studio means it has a much stronger marketing campaign. I saw its trailer 53 times at the theatre).

As far as the critics go, Breakthrough currently has a fresh score of 64% on Rotten Tomatoes. While the film isn’t getting any praise for being subtle, there is some appreciation for the acting. Chrissy Metz, of This is Us, is extremely skilled and could possibly provide enough of a face to bring out audiences that may have otherwise been sitting on the fence. Produced by DeVon Franklin, who was also behind the very successful Miracles From Heaven, this movie has a solid chance at a strong opening weekend.

With Earth Day right around the corner, Penguins looks to grab attention from a day dedicated to nature (Christopher: The usual yearly strategy for the Disneynature animal docs). The fact that it is a family friendly film during the Easter weekend won’t hurt it. As is expected of Disneynature, it looks incredibly beautiful. Past Disneynature productions fit a pattern of ranging between four and six million for their openings, with only two exceptions. Chimpanzee from 2012 earned $10 million, while 2009’s Earth nabbed $8 million. Penguins probably won’t see that kind of success and will likely fall right in amongst the standard numbers.

However, it should be noted that penguins have proven to be box office gold in the past. March of the Penguins in 2005 was a smash hit, ending up with $77 million domestically. I cannot see Penguins getting anywhere near that, but the cute little birdies are interesting enough for all age groups to enjoy. And there was a penguin in Fight Club. How does that help? How does it not, I simply reply.

The Curse of La Llorona

So far, all the films set in The Conjuring universe have had massive opening weekends. The smallest so far was Annabelle: Creation, and that took home $35 million. The big difference between those films and The Curse of La Llorona is the fact that the other films had a visible connection to The Conjuring. Apparently, a priest from the final scene of Annabelle has a supporting role, and that is the complete connection. At least with Annabelle and The Nun, viewers were going in seeing something that was specifically a part of The Conjuring movies. Will a throw away character and name-dropping James Wan in the trailers be enough to really convince people to come out? I don’t think so.

Currently, The Curse of La Llorona is sitting at 35% on Rotten Tomatoes, which needs to be taken with a grain of salt when it comes to horror films, as critics opinions mean less in this genre. So many supernatural horror films have come and gone, and this one needs something to show that it is different. To me, the marketing materials don’t do that, as the trailer is just a laundry list of clichés. One element that it has going for it, is the fact that it is based around Mexican mythology, which may open the door for Latin audiences. Back in 2014, Paranormal Activity: The Marked Ones aimed for the same crowd and did not perform nearly as well as the previous films. However, I believe that had more to do with the fatigue of the franchise than it did with having a film focusing on a minority group.