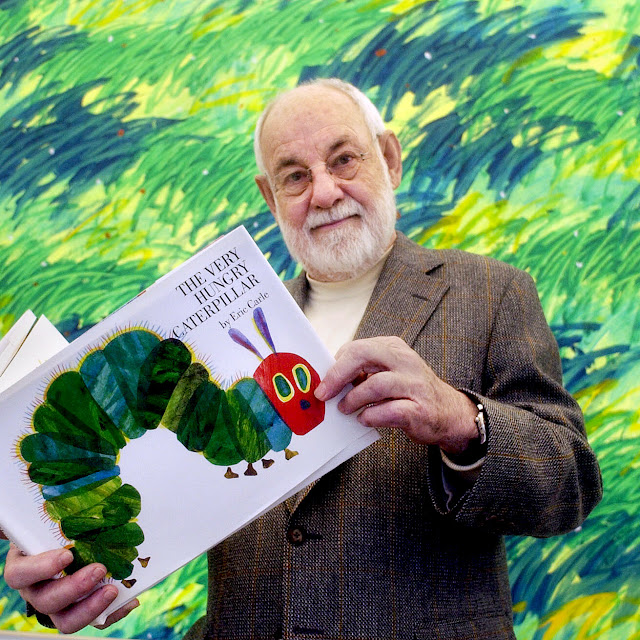 Like most kids, I was a huge fan of the children's book The Very Hungry Caterpillar and at age 4, it was an undisputed literary classic. My affection for the author and illustrator Eric Carle has less to do with my own childhood but rather how significant he was with creating my kids' love for books, reading and stories.

Everett was a fan of Carle's most well-known book, but he had an even deeper love for Polar Bear, Polar Bear What Do You Hear?, which was written by Bill Martin Jr. but Carle was the illustrator with his very distinct and classic style. Everett had that book read to him so many times that by age 3 he had the book memorized word for word. We would hear him not only say every line uttered by the animals but do it in the voice and expression of that animal. He also would always 'read' the title and the names of the author and illustrator.

He was such a huge fan of the book that he wanted to seek out other similar books, which lead to finding the Martin and Carle collaborations, Brown Bear, Brown Bear What Do You See? and Panda Bear, Panda Bear What Do You See? After memorizing those books word for word, he also had the names of the creators of the beloved stories burned into his mind. He soon discovered books written and illustrated by Carle like The Grouchy Ladybug, The Very Quiet Cricket, The Mixed-Up Chameleon, Papa Please Get the Moon for Me and Do You Want to Be My Friend.

It got to the point where if we went to the library or bookstore that Everett would first ask if they had any pop-up books and then if they had any Eric Carle books. Carle was one of Everett's first favourite authors and would go everywhere around the house or to grandma's with one of his books in hand. He would move on to other books and authors, but Carle was definitely one that sparked his love for books.

Danika did not have the same love affair with Carle books, but she still wanted them read to her often and would choose the same book to be read several nights in a row. Carle became a much more significant author to me as a parent than he ever was in my own childhood. I am so thankful how much his books and illustrations captivated my kids and got them excited about books.

Carle crafted books that allowed children's imaginations to soar. His bright and colourful pictures weren't concerned about reality, which is why you could have a blue horse or a purple cat. It allowed my kids to trust thinking outside the box and have permission to allow their creativity to run wild. Carle showed them that were limited only by their own imaginations. M any of his book were about the title character turning out to be more than you imagined, which allows kids to dream and know that they can become more than they are at this moment. It is a message that still means lots to me as adult who still is overwhelmed with my own hopes and aspirations.

The caterpillar was more than just hungry, but on the path to being a butterfly. The girl could get the moon. The children were all the animals they could imagine. The ladybug could turn out to be happier. The chameleon could find a place to belong, Everett and Danika believed that imagination was gold, and they were allowed to dream and aspire for more.

Eric Carle entertained, inspired and nourished so many children. He did it for a few parents along the way. I am so thankful that he was such a favourite in this house. We will always be grateful for the great stories he provided and the strength he provided to my children's imaginations. Thank you, Eric Carle.