The Drought is Finally Over, Now Let the Downpour Begin

February 15, 2010
Until last night, Canada had never won a gold medal when hosting the Olympic games. There were amazing moments for Canadian athletes at both the Montreal and Calgary games, and fantastic stories about Canadian athletes beating the odds to win an unexpected medal (for example, Elizabeth Manley's legendary Silver win). But it was always a bitter pill to swallow when it came to the fact we were the only host country to be unable to walk away with a gold medal. After last night, we no longer have to face that fact, because Alexandre Bilodeau took home our first ever gold medal on Canadian soil. I have to admit I was filled with Canadian pride when watching Alexandre put on such an amazing performance. I was then completely overwhelmed with emotion when he was declared the winner. Yes, I know it is only games. Yes, I am aware I don't know Alexandre personally. But there is always something special about the Olympics, about these athletes that spend their whole live trying to reach this dream. It is great to see them realize it. It is even greater when you can see a fellow countrymen be able to make his home nation proud.

For me, the thing that makes this win so special is that Bilodeau appears to be such a worthy person of his fame and glory. He will always be the first Canadian to win a gold medal on our own soil. I am sure there will be many that will forget him in a few weeks but I know he must have inspired a few young Canadian kids to pursue an opportunity to be in the Olympics. Last night, he became a hero and icon, and he truly seems to deserve, at least, his 15 minutes of fame.

What I love about the Olympics is the stories it creates. Athletes who have to overcome adversity in order to become champions. Or the underdog who comes out of nowhere to achieve way beyond their personal best. Or the stories of unexpected displays of sportsmanship. I understand the Olympics have had controversies or ugly sides, but I feel the heart warming stories are able to overcome the darker sides. Even this Olympics was beset with tragedy, but even though we shouldn't forget the loss of Nodar Kumaritashvili, there are still going to be countless opportunities for heartwarming moments.

Last night was one of those heartwarming moments. Yes, the actual moment of a Canadian getting the gold medal plays a huge part of that, but there is much more to this story. Bilodeau dedicated this win to his biggest fan and his number one inspiration, his brother Frédéric. It was great seeing how much the two brothers loved each other, for that matter, how close the entire family was. It was great hearing how Bilodeau was inspired to train hard and never give up because of seeing how his own brother was a fighter and a survivor. As many probably know by now, Frederic is diagnosed with cerebral palsy, and was told by doctors that he would not be able to walk past 10 years old, yet he is walking at 29 years of age. It was amazing hearing Alexandre speak of his brother because it became clear that his brother was his hero. It was great watching Frederic in the stands because you'll never see anyone get more excited over another person's success. This was truly one of the most heartwarming moments I've seen.

This is why I love Olympics. The great human stories that it creates. Being able to see these amazing people rise above of it all. It is opportunity to see people who are not only great athletes but fantastic human beings.

Of course, it was great to see Canada get a gold medal, but I am pretty sure we will get to see many more of those in the next 2 weeks, but I also hope the great human stories continue as well. 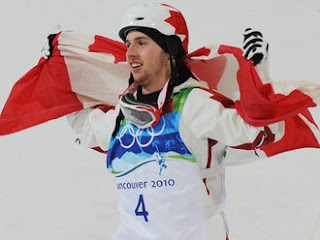