Because Heart Attacks Were So Hard to Come By

April 07, 2010
Somebody forgot to tell KFC there was a new health kick. Or they mistook the term, and thought it meant you were punting thoughts of health into the sun to have a fiery death. Speaking of death, here is the abomination created by Kentucky Fried Chicken. 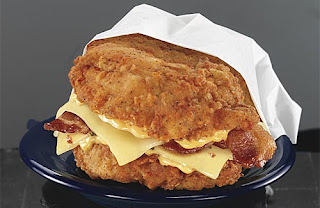 This, my friendly readers, is what is called the Double Down. Or also know as 'Heartache in Sandwich Form.' Though, I was always under the belief (the obviously mistaken belief) that a sandwich needed bread or buns or something that wasn't meat to contain the goodness. But KFC laughs at such notions, instead created a monstrous beast, which has never heard of things like bread or buns. This atrocity is two strips of bacon, two slices of cheese and a giant glob of special sauce sandwiched between two pieces of deep fried chicken. Yeah, I said chicken. Deep fried.

I am pretty sure, KFC decided they had way too many customers to handle, and they needed to find the quickest way possible to cut down their base. They looked at the most unhealthy things in fast food, like fat-a-licious bacon and clog-a-mite fried chicken. They thought their only choice must be to combines those vile concoctions and then throw out anything that might be mistaken as un-artery cloggy. Those arteries had to be clogged, thus everything fat had to be united into one mass monster.

Apparently, there is no set date on when this heart stopper slithers into Canada, but Americans get to stuff their arteries with fat on April 12th. Good bye America, it was nice knowing you. Canada, be afraid. Be very afraid. The monster will seek us next.
Idiocy Media