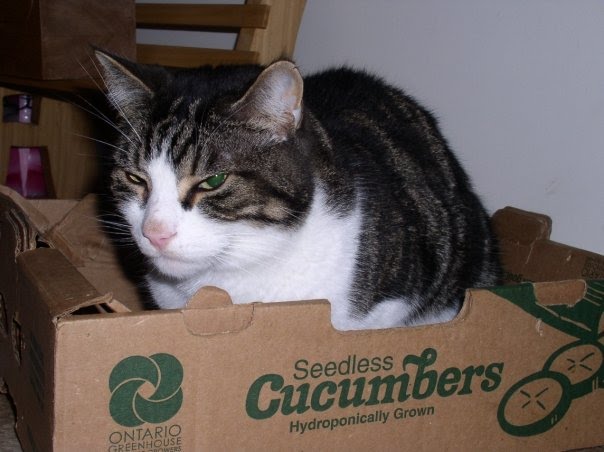 A few weeks back Emily picked up a cardboard box, and asked me if we really needed to keep it or if we could finally recycle it. I agreed its days of usefulness had run out and it was probably time to send it off to that big recycling plant in the sky (or at least, the one outside Brantford -- it might be on a hill?)

You see, this box entered our lives like many other boxes do, it was used to carry in our groceries because we're too cheap to pay five cents for plastic bags. But our time together did not end there, but instead it became a resident for probably close to two years.

You see, there was one other resident in our house that instantly saw something in this box that no one else could. He saw it as a great place to sit in. Thus the box instantly become Crosby the Cats newest 'comfort zone'. Some animals like beds or pillows, but Crosby preferred the box. Now, this isn't to say we didn't have a 'cat bed', but he did think the box was much better at meeting his needs.

We quickly realized this was an object that Crosby really was fond of. While we were trying to teach our cat to actually sit and wait for his food, we realized the box would be very helpful for this training. So for the next two years, Crosby learned the box was the place to run to and sit in when it was time to have his meals. It became a pretty effective way to train Crosby, and stop him from dancing all over the house singing his 'I Want To Eat' song (which didn't actually have those lyrics or any lyrics).

The box became an extension of Crosby and was a place he went to when he wanted to gnaw on plastic or stare at the window. As many things in life, it began to change. Last September, the Spicer family got a new addition, and if you are following this blog then you know it is Summit. In Summit's early days, he took chewing everything. The cardboard box happened to be a thing. The cat was also a thing, but he took to chewing him much later. This meant that we needed to start hiding the box away from Summit, if we didn't want it to turn into wet, strips of goo. We would pull it out any time Crosby was about to eat, but for the rest of the day Crosby had to find new comfort zones.

If you've looked at some past pictures on this blog, you will notice that Crosby now has an elevated fort like thingie (that the people at the pet store call a Cat Tree, but you're not supposed to water it). Since at the very top Summit cannot reach him, it has now become his new place of comfort.

This is why I was now left with the inevitable task of throwing out the trusty cardboard box. Though it has done us much good in the past and been a good friend for Crosby, it was no longer needed.

So, I say 'RIP Cardboard Box, you probably won't be missed, but it was good to have you around when we needed you.'

On a much happier not, Summit is now a year and one day. For his birthday, we rewarded him with solitude in our house while we had fun at a BBQ in Sarnia. He may not have had much fun on his birthday, but at least his parents did. To make up for it, he was given the greatest birthday gift a big, black, thick-coated dog could want -- cool air. Cool air in the form of an air conditioner. I think, I'll like it a bit too.
Humour My Life Pets Pictures Tribute