RIP Leslie Nielsen: A Tribute To A Canadian Icon 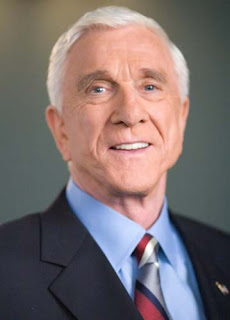 During my time in the senior elementary school grade years, the film Naked Gun was widely regarded as a cinematic masterpiece among myself and my peers. Leslie Nielsen was easily one of the most popular and most loved actors in my circle of friends. Naked Gun was far from the first of the comedic spoof films that relied on sight gags and outright silliness, but it was likely the film that caused the early 90s craze that created several similar films like Hot Shots! or Loaded Weapon (which depending if your teenage boy or not is either a benefit or bane to cinema). In the late 80s and early 90s, Naked Gun and Leslie Nielsen were the reigning kings of goofy spoof comedies. The film lines and scenes were constantly recited on the playground, and often caused uproarious laughter. Essentially, the only thing that rivaled Naked Gun for comedy was an unexpected fart during math class.

Before Naked Gun, my father introduced me to the 1980 classic disaster film spoof, Airplane. Since my first introduction, I am sure I've seen that film close to 10 times now, and many of its moments and lines are firmly implanted in my mind (and still cause me to chuckle). There is many films that have attempted to repeated the success and humour of Airplane, but most have only succeeded at being cheap imitations. There is classic jokes, gags and lines from the film that are still remembered or quoted by many today (even if they are oblivious to where it came from).

"Surely you can't be serious."

"I am serious, and don't call me Shirley."

This is probably an exchange that almost everyone knows, even if they've never seen the film Airplane. One of the things that made that line such a classic, and actually made so much of the humour in Airplane memorable, was Leslie Nielsen's perfect dead pan delivery of the lines. He was performing completely goofy slapstick comedy, but his character was always serious (even if his lines were absurd). I really think this demeanor and presentation is what made everything so much funnier. Airplane and Naked Gun would not be the comedic classics that are still adored today if it wasn't for Leslie Nielsen; he is what made these films so endearing and enjoyable.

In the early 90s, the Naked Gun franchise continued to be a comedy that my friends and I willingly gave up our hard earned grass cutting or grocery cart pushing money for. We flocked to the cinemas for both sequels Naked Gun 2 1/2 and Naked Gun 33 1/3. They progressively got sillier and more brain cell reducing, but provided the necessary ingredients to entertain a teenage boy who consistently laughed at the word 'poop'. I don't think the sequels would entertain me the same way now, but I'll never deny the impact they had on my teen years.

Unfortunately, these films caused Nielsen to be typecast, or at least, in the mainstream work he did. Throughout the 90s, he continued to churn out spoofs that were similar to the Airplane and Naked Gun models, but they progressively became less and less entertaining. Or maybe I just got older, and the films no longer were focused on my demographic. I stopped rushing to the cinema to laugh at Leslie Nielsen, but I always held the Naked Gun and Airplane series dear to me as 'cinematic classics' (which would cause film snobs everywhere to want to gag me with overly buttered burnt popcorn).

In 1994, Leslie Nielsen actually found his way into another form of entertainment that I was consistently enamoured with. Nielsen entered the even campier world of wrestling. During the summer, the WWF had a great mystery about where the real Undertaker was, when he disappeared from the company after losing a casket match to Yokozuna. The company obviously knew how campy the storyline was, and so they got Leslie Nielsen and George Kennedy (comprising their roles from the Naked Gun series in order to promote the third film that was coming to cinemas at the time) to try to solve the mystery. The WWF used their celebrity to help promote the Summerslam main event of Paul Bearer's Undertaker against the Million Dollar Man's Undertaker (you really don't want it explained -- but if you have to know then Google Summerslam '94), and Nielsen used it to advertise Naked Gun 33 1/3. The skits were pretty cheesy and did almost nothing to add to the already campy match, but it was definitely no fault of Nielsen who performed the very best he could. Actually, he was probably the best part of the whole silly storyline (he was at his dead pan comedic best).

During my phase of Nielsen love, what I didn't know was he was once a serious actor before his much more well known comedic spoof career. He starred in the SciFi classic The Forbidden Planet and had a key role in the '72 disaster blockbuster The Poseidon Adventure, and he had roles in hundreds of television shows and dramatic films. Actually, when Airplane hit cinemas, many critics actually felt Nielsen was miscast since it was his very first comedy (which is so interesting to realize now, when he is largely known as a comedic actor). Apparently, even when he was acting in very serious roles, he was known as a prankster on the set. It was this reputation among peers that got him the role in Airplane, and his comedic skills then continually landed him several more roles and essentially gave him a second successful phase in his career (and among most today, the one he is known for).

Nielsen always seemed liked an easy going and fun guy. I obviously did not know him, but I felt like he would be someone I would enjoy spending a few hours clowning around with. The first few decades of his film career proves that he was a talented and gifted actor, and his last several decades proved he never took himself too seriously. Though he seemed to always really have a love for acting, and even during the phase of being known as a comedian, he also tried to take some lesser known dramatic roles that tested his skills as an actor.

Leslie Nielsen wasn't my favourite actor, and I haven't seen a huge catalog of his films. But he did play an important part in my childhood and teen years. He always did seem like a very cool guy to me. I was sad when I read last night that he passed away, and I am now interested in trying to catch some his older work.

As with any celebrity that I personally did not know, his impact on me was significantly less than the one he had on his family and loved ones. So, I send my best wishes and thoughts there way, but I am sure they know he lived a long and happy life. Even now, thinking about him causes me to smile rather than feel sad.

I completely admit that I don't know a lot about the actor other than those films that I cherished when I was younger. So, I want to encourage you to check out this small bio that I read on Roger Ebert's blog, and it also contains a rare screen test that Nielsen did for the classic biblical epic, Ben Hur.

RIP Leslie Nielsen, and thank you for the countless laughs.
Blast from the Past Link Media Movies Musings News Pictures Tribute