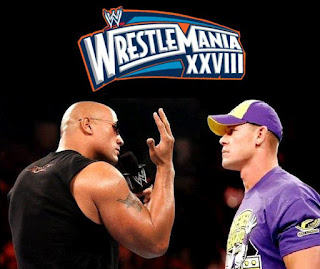 Wrestlemania XXVIII is this weekend. WWE has headlined the show with one of the most anticipated matches in a long time, John Cena vs. The Rock. The big return of The Rock has caught the attention of several wrestling fans that have gave up on wrestling years ago. The WWE is banking on this event to gross them mountains of money, and based off the projected buy rates and the tickets sold, it looks like they'll do pretty well for themselves. But will it make wrestling hot again? Is this the event that draws back all the old fans and creates tons more? Well, I discuss that very thing in today's Collective Publishing pop culture column.
Cool Stuff Link Media Musings Pimpage Wrestling