RIP Crosby: My Lap Will Never Be the Same 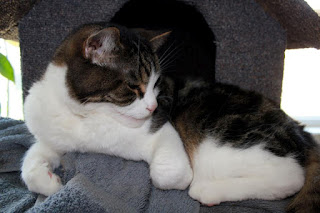 Before Everett and Summit, our baby was Crosby.  He was our first son.  He quickly became an important part of our family.  We were never "cat people."  We always wanted and planned on having a dog.  Our friends needed a home for a cat, and we agreed to at least look after him for the short term.  After about a month with him, it was decided he was now part of our family. 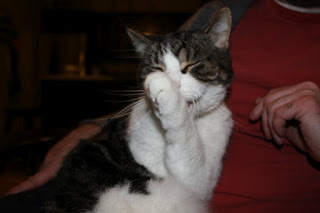 I said we wanted a dog, and before Summit, we need something to fill that desire.  We ended up treating Crosby a lot like a dog.  We taught him how to sit.  We got him to wait for his food.  We even tried to take him for walks.  We were successful at the first two, but the walks always ended up being "watch Crosby roll around in the dirt, then he forces us to carry him home."  But we always impressed people with our cat that would sit and wait for his food until we said, "Okay." 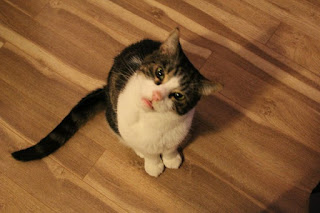 People were a little less impressed by his habit of biting through bags or stealing chips from their hands.  Crosby liked food.  He really, really, really, really liked food.  To the point he bit through almost anything to ensure it wasn't food.  You learned pretty quickly that you don't leave cheese, buns, or plastic bags on the counter unattended.  Or actually, unless you have quick reflexes, watching over it didn't really help either. 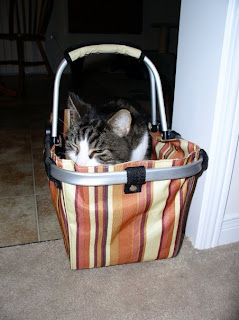 It was an annoying habit.  A habit that drove me crazy when he decided to sample the nipple to Everett's bottle.  But right now, it doesn't seem so bad anymore.  I just grabbed myself some ice cream, and it actually broke my heart to not have Crosby jumping up on the counter and swatting at my hand so he could get a taste.  I'm up here at my computer with food nearby, and he isn't begging.  I miss it.  It sounds funny, but even the absence of the less adorable traits can make you miss what you love. 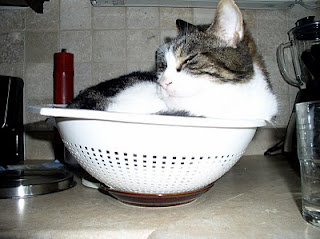 We knew Crosby was really sick when he refused to eat this past weekend.  He had gone about three days without showing even the smallest interest in food.  I had no clue who this cat was.  It wasn't the one I'd spent the last four years with.  We found out that things were pretty bad, and the most humane choice was to put him to sleep.  Anyone who loves a pet like a child can understand how painful today really has been.  Crosby may have been annoying when he dragged my chicken wings into his "cat house", but he also had many things that I really loved and will forever miss. 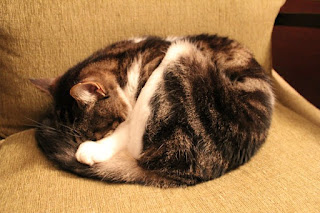 When I was busy writing all day, Crosby would almost always make himself home at my lap.  He'd jump up uninvited (because what possible reason could I have to not want an entire body on my lap), and then curl himself up against me.  Writing can be a solitary and lonely job.  Crosby provided me great company.  Crosby had anywhere in the house to take a nap, but it touched me that he decided my lap was the optimal place.  Eventually, he'd notice that I had not given him any pets yet.  He would gently swat on my hand, and I knew it was time to take a break from writing.  He'd give out the delightful purr as I scratched his neck, and then he usually repaid my petting by touching my cheek with his paw.  This was Crosby and Daddy bonding time, and it always made my work day extra special. 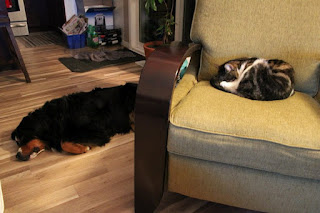 Sleeping at night will never be the same.  Crosby loved jumping into bed with us, and then would crawl deep into the covers.  It was his little blanket fort.  He usually either liked to sleep in between our legs or against our side.  He often chose Emily, because she was the less hazardous option.  I tend to roll in my sleep.  On the nights Emily was away, he opted to sleep against me, but usually by morning I found he had retreated to the foot of the bed.  I loved the fact that Crosby wanted to be sleeping near us. 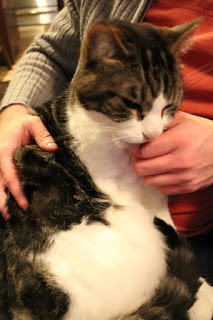 Cats are known as being independent.  People say they sort of just accept the existence of their pet parents rather than adore them like dogs do.  Now, Crosby was independent and was fine with being by himself.  I also know he loved us.  I know he preferred to be in our company.  If I was sitting down then it would only take a few seconds before he jumped into my lap.  If we closed the door to our bedroom, we were rewarded with clawing and crying until we allowed him to sneak into bed with us.  If I was outside, he'd often watch from the window and paw away as if he thought he was just one clawing away from breaking out.  If we had been gone for a weekend, then he'd follow us all around the house and rub himself against our legs.  Crosby was fine on his own, but he was happiest when he was with us. 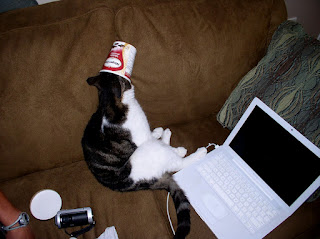 Crosby had many ways of letting us know that he liked us.  His favourite was jumping up on our chest and knead it.  Usually the kneading progressed to my neck, which was a little less comfortable than an army of ants jabbing me with spears.  It was painful, but he purred during the whole process.  I've read that some cats do this as a way to show love.  Or maybe it was some giant practical joke being perpetuated by cats everywhere, and they're having a good chuckle that we believe this is a sign of affection.  If he wasn't kneading then he was cuddling -- which is far more comfortable.  I know, he enjoyed our company and he just had his own way of displaying affection, 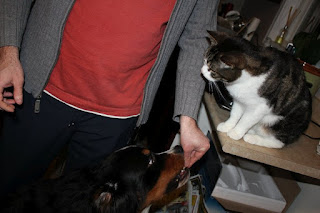 Crosby was getting a bit older, and so he wasn't playing as much as he used to.  For the first year, we bought him countless toys, and he loved to stalk and pounce on them.  We'd slide the toy against a railing or under a chair, and he'd start swatting away at them.  He also really loved hiding and creeping towards his "prey" (that feather ball never knew what hit it).  It was fun to watch, and I was sad when he stopped this form of play.  This could partly be due to the fact he got a new play mate in the fall of 2009.  Summit. 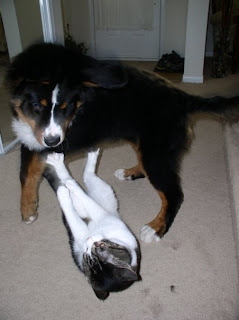 Summit and Crosby had some epic wrestling matches.  Sometimes it looks like Crosby was being tortured by Summit.  The thing that makes me think that Crosby enjoyed "playing" with Summit was that Crosby never scratched Summit (often).  He had all his claws, but when he swatted Summit, he kept the claws in.  Though Summit seemed like a bully, I think they had a good relationship.  Crosby would even swat at Summit in attempt to get him wound up.  I miss Crosby's stalking the toys days, but I think he had just as much fun with Summit. 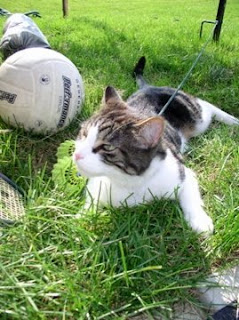 Crosby was family.  I never believed the ridiculous line "it was just a pet."  He was my son.  I loved and bonded with him.  I'll have memories that will stick with me for years.  Crosby knew when to cheer me up when I was sad.  Crosby knew that petting would relieve my stress.  Crosby trusted and loved me.  He knew he was in a house that loved him dearly as well.  I'm really glad that we took some pictures with Crosby and Everett, and Everett will have something to remember his brother. 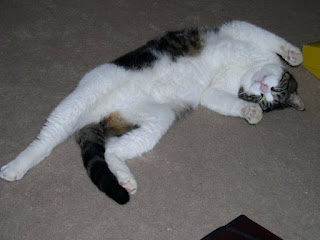 I'll miss you, Crosby.  I will always love you.  RIP Crosby.  You were one amazing cat. 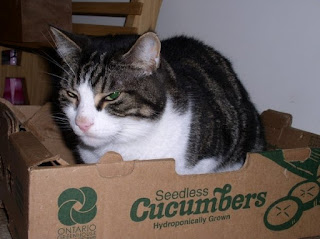