I Still Have My Sanity: Night One as a Single Parent with a Teething Baby 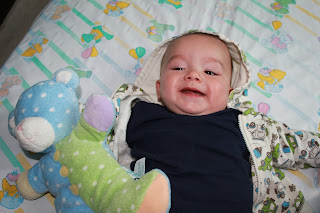 Apparently, Emily did have a real pep talk with Everett this time.  And he listened.  He even followed through with the instructions during the day time.  Everett was an absolute joy during the day.  He entertained himself on the mat.  We had hours of fun play.  He told me countless stories.  He even took two short naps.  He ate really well from the bottle.  He wasn't showing any signs of the fussiness he has been unleashing ever since he started to teeth.

Until it was time to go to bed.

Well, actually, he was great during the night time routine.  He enjoyed his story, he allowed me to wash his face, and he got changed without a fuss.  Then I laid him down in his crib.

There must be an invisible button on his back.  Or maybe the night time and the disappearance of the sun caused a transformation in my son.  A shaved version of a mini werewolf.  He howled.  Oh, did he ever howl.  Not necessarily to the moon, but I'm pretty sure the angels heard him.  Or at least the neighbours.  I turned on every sleep inducing apparatus we have, and I sang my heart out, but it was all useless. He needed to be held.

He needed to be held for the next two hours.  He did sleep.  But it was on my shoulder.  Every time I thought he was firmly residing in SleepVille, I laid him down.  Every time, this inspired Everett to knock out his "Greatest Hits: Cry Edition."  Finally, I opted for one thing that is kryptonite to the sleepless baby.  A bottle of breast milk.

And why did I wait two hours to bring out the bottle?

Well, I had just fed him before originally putting him down.  I had done a good job of stuffing him full of nutritious milk all day.  He actually opted to stop drinking the last time I fed him.  I didn't think he was hungry.  He probably wasn't.  But two hours later and several bouts of crying can change all that.

Plus I don't have natural human organs that produce milk.  This means that I am taking it out of the fridge and taking at least ten minute to get it at room temperature.  I wanted to make sure he was actually going to drink it, if I was going that route.

He did.  After 11:00pm.  It meant he finally drank himself into a solid sleep, and I could lay him in his crib with minimal fussing.  He let out some token cries about 10 minutes later, but then the soothing Gentle Giraffe lulled him back to sleep.

Until 3am.  So, no sleeping through the night this time.  The plus side is that we know I don't sleep through his cries.  I immediately went to the bottle this time, but it was four by the time he was back to sleep.  He didn't really fuss this time, so that wasn't the reason for being up an hour.  I just added in a diaper change because I correctly assumed all the bottle feeding was going to turn my son into a pee fountain.  Plus I just don't work very efficiently at 3 am.

Then, we played the game all over again at 7.  I can deal with 7.  I often wake up before that time.  Though not when I've spent an hour awake in the middle of the night, though.  I assumed he'd be ready for another changing and a good feeding.  This one was much faster, and he has been asleep ever since.

It was a very different night than the miracle that was my 5 days of single parenting back in May.  I blame it on teething.  He really was amazing during the day.  I'm not sure if his gums became more painful at night.  He definitely needs more comforting.  We essentially cuddled for two hours.  I like my son cuddles.  I prefer them during a time that isn't designated for him to be sleeping.

Oh well, I've got one more night to try it all again.  I am actually feeling more rested than I assumed I would be.

The most important part is I've once again survived a night of single parenting.  Because I just don't think Summit is ready to take on this role.