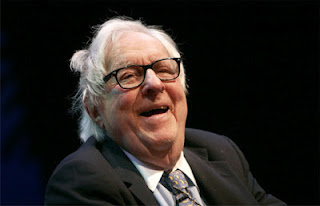 Ray Bradbury passed away at age 91.

It actually happened on June 5th.  I realize in Internet terms, that is eons ago.  Most have now moved on to new topics.  But as a writer who aspires to have novels published, it wouldn't be right to miss out on talking about one of the grandmasters of science fiction.  I would have reflected upon this iconic author much earlier, but this past months has been focused on trying to push my own writing career forward.  When I haven't been glued to a computer with my fingers furiously typing, I've been trying to be a good husband and father.  I know Ray Bradbury would have understood.

Ray Bradbury is not only an iconic science fiction writer, but was one of the modern legends of literature.  Any type of literature.  Even though he has largely been pegged as a science fiction and horror writer, his writing was always so much more than one specific genre.  He didn't write what some term as "hard" science fiction, where he got mixed up with the technical side of the genre.  He was always about human emotion and the human spirit.  His tales would have a profound meaning.  More importantly, they were always entertaining and full of an amazing imagination.  Bradbury's works had a broad appeal, and the fact almost every current novelist ended up saying something about his passing and calling him an influence for their own career, proves the broad appeal he had and how his writing wasn't ever intended for one genre.

Bradbury's works are probably some of the most popular fiction of the past century.  Even if you never heard of the name Ray Bradbury before this post, I'm pretty confident you heard of one of his stories.  Or the very least, you watched a TV show that used one of the countless concepts he created through his fiction.  Did you ever see the famous Simpson's Halloween special where Homer goes back in time and accidentally kills a bug, which then leads to him returning to a drastically different present?  Well, you can thank A Sound of Thunder for that one.  There is a good chance you've seen many other films or shows that you felt had an original idea, and there is a good chance one of Bradbury's tales had some influence.  Many writers will acknowledge Bradbury's works for being a major influence to their own stories.  Stephen King acknowledges Something Wicked This Way Comes as a major inspiration for his novel, Needful Things.

It is easy to see why Bradbury's works have been so influential.  Not only are they packed with amazing an imagination, compelling storytelling and engaging prose, but there are many tales to read.  The man was incredibly prolific writer, as he had 27 novels and over 600 short stories.  It is impressive that not only could he write so much fiction, but he was able to keep each one creative and unique.  The man was truly a well of imagination, but also had an amazing stamina.  At 91 year sold, the man was still writing, even though he had definitely earned a retirement.  Writing was what he did, and I'm sure he had an active imagination right to the end.  I know that once you get those thoughts swimming around in your head, that you have no choice but to eventually release them on to the paper or computer screen.

Bradbury is the type of writer who was mainstream, but also had some respect in literary circles as well.  He had easy summer reads, but also created work that could be studied and discussed in classrooms.  Fahrenheit 451 is an entertaining and engaging novel, but its message about censorship allowed it to be an often read book in high schools.  The Martian Chronicles is another classic that many casual readers would gobble up, but also would be a novel some teachers would find valuable for study.  Bradbury had the skill of creating truly engaging stories, but also exploring themes and message that brought true value into society.

Bradbury is one of the authors that pushed me to be a writer.  Here is a man that created works that elicited real emotion into the reader.  He was a man who just never stopped writing.  Many of his novels and short stories will be remembered a hundred years from now, and be read by a new generation of readers.  Even though many of his works dealt with science fiction, I feel his stories were still timeless.  Yes, the technology in the stories will be dated or proved to be inaccurate, but the people will still be real.  The message will still have value.  I hope one day I can create a story that is half as imaginative and contains an ounce of the real emotion found in each of Bradbury's tales.

There is another thing that makes Bradbury an inspiration.  He was a man that never lost touch with his childhood.  Most children have an amazing imagination, and are able to go on great adventure fighting dragon or flying to Mars.  Eventually, children grow up and lose that imagination.  They lose that kind of play.  Bradbury was able to churn out so many works of fiction, because he never lost that sense of wonder.  His house was filled with toys, and preferred them as presents compare to more adult merchandise.  He kept the wonder and energy of a child.  This meant his imagination stayed intact, and so he could continue to tell these fantastic stories.  We all need to grow up and take on responsibility, but it doesn't mean the child in us has to completely disappear.  It doesn't mean we need to give up toys or that sense of play.  Bradbury clung to being a kid so much that he never even got an adult job.  He remained a storyteller his whole life.  I'm sure his love of toys and play is what allowed him to live for so long, and will also be the reason his name will live forever.