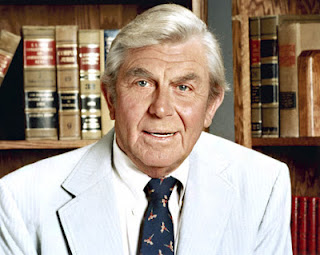 Andy Griffith passed away at 86 years old on Tuesday.

The world has now lost two iconic figures in the last month.  It was a month ago that Ray Bradbury passed away, which is a loss even though he lived a full life.  I'm sad that my son will grow up in a world that is absent of these two magnificent men.  I wrote how Bradbury inspired me to keep the child inside me alive, and was responsible for fuelling a part of my imagination.  He was an inspiration, and I hope to always remain young and full of spirit like Bradbury.  But Griffith will be missed in an entirely different way.  He was more like my TV grandpa.  I haven't had a grandpa since 1983, and I was always comforted knowing that Griffith was somewhere in the world.  He also seemed like someone ready to give a warm hug and to make everything seem better.  I wish my son would be in a world where Griffith was still ready to deliver a hug, but I do know his legacy will endure.

Everett will be able to know Bradbury through his countless works of fiction.  I am just as confident that for many more decades that Griffith will still be populating afternoon TV.  My son will always have access to the warm TV grandpa thanks to the power of TV reruns.  Maybe he will realize, just like I did, that the world is a better place because of ol' Andy Griffith.

I know Andy Griffith is best remembered for being Sheriff Andy Taylor in the rural town of Mayberry on The Andy Griffith Show.  The show was all over the TV map in rerun form when I was a child, but I never really remember watching much of the show.  I'm sure it had to do with some '80s kid prejudice against black & white shows, because colour was king and I felt we had a colour TV for a reason.

I am not sure if I ever watched a full episode of The Andy Griffith Show.  I at least now know its cultural significance.  I realize it was a beloved show.  The fact you can still find it somewhere in rerun form on TV, sort of proves that point.  I did end up watching an occasional 5 minutes of the show on TBS, because back then, that channel had a habit of starting their next show five minutes after every other network and channel.  I tuned in for my 6:05pm WCW Saturday Night wrestling fix, but had to watch a bit of Griffith before that could happen.  I remember thinking the show was pretty funny for something decades old and that one day I might get around to checking out a whole episode.

The Andy Griffith Show may not be a show that holds any fond memories for me, but it definitely contained some well-known stars.  There was Don Knotts playing the type of role he always seemed to land, the bumbling but loveable goof.  Being a '80s child, I best remember him as the landlord Ralph Furley on Three's A Company.  Of course, there was little Opie played by Ron Howard, but I'll always remember him better as either Richie Cunningham on Happy Days or a director of countless classic films.  I admit that I don't attach these actors to this show, but I do realize that for many this is how they will be best remembered.  It is definitely the show that launches all their careers.

I'll always remember Andy Griffith best as the friendly southern criminal defense attorney, Ben Matlock.  My mom didn't watch a lot of TV when I was kid, but if she did turn on the TV then it usually meant either Magnum P.I. or Matlock would be on.  Or she at least, was hoping one of them would be on.  She would be clenching her crossword puzzle book as Matlock snuck into a home or office trying to find a clue that would prove his client innocent.  She'd cheer him on while he grilled the soon to be revealed guilty person on the witness stand.  She loved her Matlock, and eventually, she got me hooked on him too.

I always knew that if I got framed for murder that Matlock would be my defense attorney.  The man almost never lost a case (or at least, I never saw him lose).  Not only would he get me off, but he would find the person who did commit the murder.  He would probably make that person cry on the stand.  Matlock would make those bad people pay.

Matlock seemed like a comforting figure.  Sure, he was tough on the bad guys, but he was always there to support the poor framed innocent client.  He felt like someone that I could share all my secrets with and I knew he would keep them.  He would support and encourage me if I needed it.  He'd be someone that after we won, I could come over for some milk and cookies.  He was a big, comfy grandpa.  But he was a tough grandpa that no bad guy wanted to mess with. I would be safe and happy with him.

Matlock couldn't have been played by anyone else.  Griffith brought all those traits to the character.  Traits that almost no other actor could portray to the same level.  He was the only that could come off as being both someone you didn't want to mess with, but also felt entirely comfortable being around.  He was exactly what you wanted a grandpa to be.

The world was a happier place with Andy Griffith.  Luckily, reruns and fond memories will keep him alive.  Andy Griffith, thank you for the memories.  You will be missed.  You will also live in the hearts of many fans for years and years.

Blast from the Past Link Media Musings News Television Tribute