July 27, 2012
That was definitely one of the better Olympic Opening Ceremonies.  The three hours flew by, it was visually impressive, and had the right amount of humour.  I also enjoyed the Great Britain history lesson that showed the different eras, and the set designs were incredible.  I got a kick out of James Bond and Mr. Bean, and you got respect the Queen's acting debut.  She definitely has a sense of humour.  The little musical history lesson shows that the Brits sure do know how to rock, and it was great reminder of all the amazing music that has come from the Isles.

But you know what was the greatest part of the Opening Ceremonies? 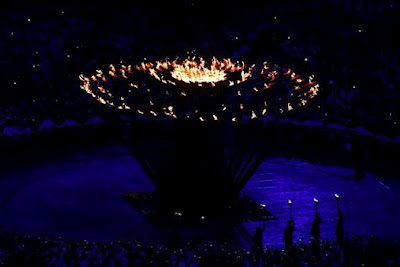 Coolest Olympic cauldron ever.  They lit all the pedals which then united to make one giant flame of spectacularness.  It looked magical.  It was something out of Lord of the Rings or Harry Potter.  Considering who the host country is, it is pretty fitting.  I totally felt I was being transported into some awesome fantasy epic and can't wait for the dragons and unicorns to make their appearance.  I'm also a big geek.

Anyway, that cauldron was magnificent, and this was a great start to the Olympics.