So, What Was the Thing That Ate Up a Huge Portion of Time at the Spicer Manor This Weekend? 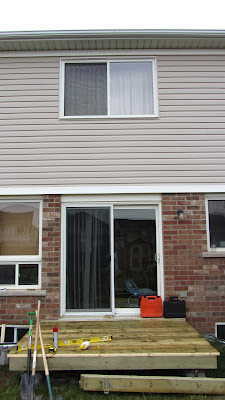 The first stage of what will eventually be a deck that will take up about a quarter of our yard.  Right now, it probably takes up barely 3% of our yard.  But a deck is truly growing in our backyard, and it would have grown significantly more if we didn't have to attend to family picnicking Sunday afternoon.

I need to add that this is a deck in which I had not part in building.  Instead, it was the hard work of a good friend and my wife (and a cameo by another good friend).

Now, why would my wife be the labourer of deck construction when a strapping young man like me hides inside the house?

Well, there are a few reasons.

1.  Drilling and hammering and cutting and hauling wood is about as exciting to me as watching a 24 hour Housewives of Orange County marathon while sitting in a cauldron of red hot coals.  This is to say, “No, it doesn’t really appeal to me a whole lot."  I'm not what you would call really skilled with the power tools or any type of person that could be mistaken as handy.  Now, if you want me to write some copy about building a deck then I can easily master that, because I'm a wizard with words and often write about things that I've never done.

This isn't to say I never ever do manual work or house projects.  If an alien race invaded my home and threatened to devour my entire family unless I drilled some wood together then I'd try to find the drill.  Plus I did play a part in the assembling of the fence two years ago.  But if I have a choice in the matter, I'd rather find something else to be productive for the household.  On the other hand, my wife has been giddy about building the deck for weeks, and likes doing projects that involve power tools.  She is the owner of all the power tools in our house, after all.  Plus she is actually good with her hands and won't turn all the expensive lumber into wood chips.

2.  All our usual sources of babysitting were occupied.  Somebody had to look after Everett.  I know, Summit was up for the challenge, but society dictates that you should have a caregiver with opposable thumbs and able to walks on only two limbs.  Between drilling holes in wood or entertaining Everett for several hours, I not only would prefer to spend time with my son, but I do the least damage that way.  It only made sense that I took up "Baby Duty," and Emily did magic with wood.

3.  The best way I could contribute to the deck build was to make sure we have the cash to either pay for the deck or make sure we have enough left over money to pay for things like bills and mortgages -- because they don't disappear when you sink money into large projects.  Now, I'm not rolling in enough wonderful cash to justify paying for a crew to build the deck (especially after the Great Baby Spending Splurge of 2012), but I'm in a fine enough spot to ensure we aren't living in a cardboard box after we dropped all the cash on lumber.

So, while people were sweating outside and playing with power tools, I was inside working out my fingers.  I had a fair bit of pay copy that needed my attention this weekend.  The best part of pay copy is that you get money when it is all over.  So, my writing was my contribution to the deck building process.  Though, I've learned it is rather hard to get a large amount of pay copy done when you've got a son that likes to be constantly entertained or has a habit of accidentally migrating under chairs or desks.  But luckily, quickly turning my head away from my work doesn't lead to severed thumbs.

This was the weekend at the Spicer Manor.  What a wonderful weekend it was.  Though it looks like we have at least one more weekend to go before our backyard is fully deckified.  It means another weekend of each Spicer member digging into their bags of special skills.  Emily will make holes in wood.  I'll smear oatmeal and mashed banana in my son's face.  Everett will try to figure out how he got on his stomach.  Summit will announce to the neighbours HIS backyard is changing.  It should be a wonderful time for all.

Since, I started this blog displaying the accomplishments of my wife and our helpful friends.  Here is a sample of what occupied my attention for the weekend. 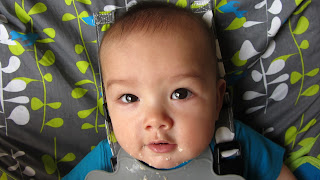 Yeah, I got the much better weekend.
Everett My Life Pictures