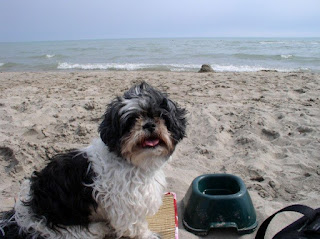 In 2005, I moved back to my parents' place.  I really did not want to make the move back home.  I'd been out of the house for close to 10 years.  The idea of living with my parents again was about as appealing as watching a weekend marathon of The Housewives of OC with the fridge only stocked with egg plants and spring water in fancy glass bottles.  My parents are great, and I love them.  It wasn't like I'd be losing out on any freedoms.  But there is always this feeling of falling backwards when you need to limp back to the bedroom you grew up in and spend your first moment of your morning chomping down Captain Crunch with your dad sitting across from you.  But I had decided it made the most sense to return home, because I was going to attend a university that happened to be in my hometown, Wilfrid Laurier's Brantford campus.  If I was going to return to the city I grew up, then why not save money by sleeping in the same bed too.  It didn't mean I had to like this obvious decision or be happy that I returned home.

But there was something that made my first few months back much more enjoyable. 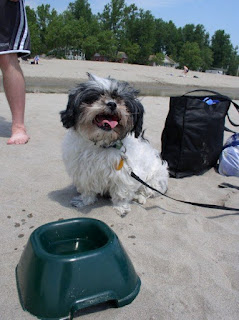 By the second night of returning home, Scruffy decided she preferred to sleep in my bed with me.  If I was home, she'd follow me around the house.  We went for a morning and evening walk.  Sometimes we just enjoyed the sunlight in the backyard.  If I was at home, I was probably with Scruffy.

When all the boys moved out of the house, I think Scruffy started to get a little lonely.  She didn't get the same attention that she was used to.  I think she was really happy to see me back, even if she was never my dog.  My dad actually bought her for my youngest brother, and for the first few years, it was pretty clear she was his dog.  He then moved off to University, and she was just sort of left to her own devices.  My return was the first time she ended up getting a lot of attention again.

I didn't think I wanted pets.  I did as a kid.  But as I got older, I wasn't sure if I wanted to deal with the hassle of training them or making sure I was home to feed or let them out to do business.  It seemed restricting.  Especially when one is in their 20s, and likes to trick himself into thinking he has a busy social life.  I loved animals.  I'd voted against having pets again.

Until I came home and spent those months with Scruffy.  I quickly learned the bond you can get with a pet.  How much joy and happiness an animal can give you.  It was cool having a dog that wanted to be near me at every moment and was ready to instantly play and give me affection.  It may be partly because most of my friends had got out of Brantford and my then girlfriend but now wife Emily was living in another city, but Scruffy became one of my best friends at that time.  I shared my deepest thought and biggest fears with that dog.  She just listened.  She loved me with me no matter how odd and scary my thoughts turned out.

Scruffy was the dog that convinced me that I needed pets.  Human interaction is important, and the only way to avoid being a hermit with a 50 pound beard.  Pets give you something that no human is capable of giving.  I love my wife.  I love my son.  I adore my friends.  But there is something a loyal and loving pet can give that is something special and very different.  It isn't necessarily better.  But it is very important.  Scruffy taught me that pets give an indescribable feeling that no other thing can ever give. My time with her is the reason we ended up getting both Crosby and Summit.  Two pets that I ended up loving more than I ever thought possible for animals. 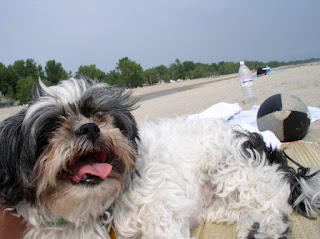 Emily started to get to know Scruffy too.  Scruffy wasn't taught too many tricks.  She was amped up with attitude.  Emily was convinced she would train this dog to do a few things.  Like most things with my wife, she succeeded.  Scruffy loved impressing Emily with her new found skills.  We also took Scruffy on a lot of hikes.  We did it enough that Scruffy would jump into Emily's car the moment a door was opened.  Before Emily, a car meant an awful trip to the vet.  Emily's car meant transportation to some place wondrous with amazing smells and different things to see.  We did a lot of things with that dog for the two years I lived back home.

I got married in 2008, and my other brother moved back home.  Scruffy then attached herself to him, and usually hid out in his room.  I didn't see her much when I came to visit.  But I always remembered the time we spent when I returned to live with my parents.

Scruffy was an old dog.  15 years old.  In the past year, she needed to be carried down the steps.  She couldn't hear when the front door was opened, so she never came down to visit.  I saw her a few times in the last year, but she was a different and weaker dog.  She wasn't the dog I remembered.

Scruffy passed away in her sleep on Monday.  When my mom told me, I thought it would hit me harder.  I thought it might leave me in tears the same way the loss of Crosby wrecked me for a few days.  But it didn't.  I think it is partly because I've expected this day for a long time.  I'm surprised how long the stubborn dog stuck around.  Maybe also because I moved on to new pets that I adopted as my "kids" and grew to love.  Scruffy really never was my dog, but I do have those special memories.

Scruffy, thank you for showing me how amazing pets can be.  Thank you for making several days in my life far more bearable.  You were a great dog.  I'll miss you. 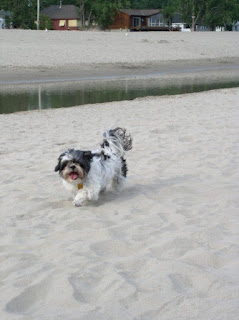