I've Done Some Epic Relationship Fails, But I Never Did This

September 21, 2012
I'm a geek.  And in high school, I performed a living manual on "how to fail at dating relationships."  I had some amazing moments of being melodramatic and overly emotional.  I'm pretty sure there were at least 6 times I needed a solid kick the pants to alert me to that fact I was about to do something monumentally stupid.  I also was a huge Star Wars fan.  What does that have to do with being bad at relationships? 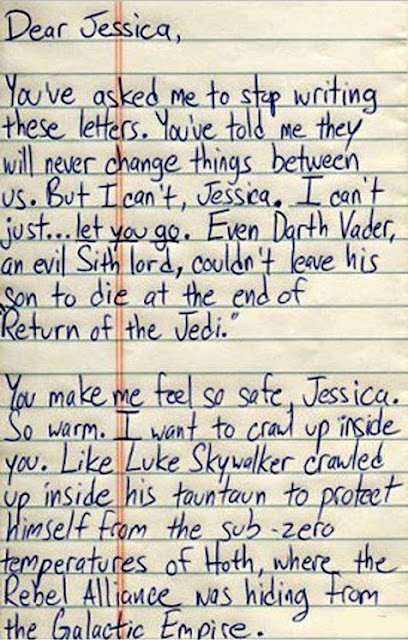 Now, if I was a betting person than I'd wager this is actually a fake.  But it still makes me laugh.  And I could also see someone writing something like this to entertain themselves.  Or you know, there really is a person who wasn't able to properly distance Star Wars from his romantic endeavours.

I definitely can't totally discount that this was actually written outside of being posted as joke for the internet.  I did once ask a girl out via an essay that contained a mention of Wendy's Founder Dave Thomas, the value of Thursday night television (still pretty high at the time), and how annoying it is to get sock yuck between the toes.

So, maybe I could have ended up writing something like this.  I'm guessing this didn't lead to a romantic dinner with Jessica -- if she wasn't a blow up doll.
How Not to Be Crazy Humour Idiocy Media Movies Star Wars