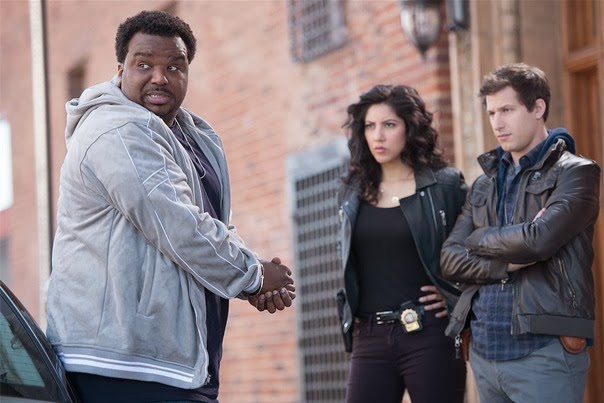 It was announced today that Craig Robinson has a new series that has just been picked up by NBC.  This is good news because Robinson is incredibly talented and it nice to see the guy get a big break, but it is also rather sad news because his Doug Judy character could have been the first recurring criminal in the series.  A show like this could really use a regular foil for Detective Jake Peralta (Andy Samberg), and Robinson was a show stealer this week trying to woo Detective Rosa Diaz (Melissa Fumero) and buddy up with Peralta in an obvious attempt to manipulate.  The end game of Judy playing Peralta was fairly predictable but the guys had a searing hot chemistry that made this one of the most consistently funny episodes from any TV series this season.  It was fun seeing the two guys bond over silly things like Fievel from An American Tail or Robinson's character trying to convince his mother that Peralta is his formerly homeless employee who was a part of his "helping poor White people" program.  They played off well with each other, but Robinson himself has mastered a dry delivery where his character is trying to be serious but the actor is hitting the perfect comic note.

Brooklyn Nine-Nine was crammed with jokes from the start to finish, and due to that, it is impressive how many hit strongly.  Detective Charles Boyle (Joe Lo Truglio) returning from his heroic act of taking a bullet was the grand slapstick you'd expect from the character as he lost a highlighter in his ass cast that lead to his butt consuming poor Detective Amy Santiago's (Stephanie Beatriz) grandmother's ring.  The best shtick for Boyle started off the show as he smashed the collection of mugs and then opted to use his grab-it device rather than his own hands to hold his coffee mug thus leading to predictable results.  This isn't the epitome of high comedy, I admit, but Truglio has the likable but hapless loser down to a science and his delivery makes the flimsiest joke feel rock solid. The character is just so sincere and is earnest in everything he does, and the fact he never stays down too long, it is easier to laugh at him.

Andre Braugher proves again that his own dead pan delivery is what really makes many of the jokes soar.  He plays almost everything serious and dead pan, and it works incredibly well while he is surrounded by the goofball crew.   There aren't many that could have made the running over the foot scene laugh-out-loud funny without doing some grand gestures or slapstick, but not making a single sound when the scooter runs over his foot then calmly announcing he is in great pain without any expression or facial change was a comic genius that would be easy to under appreciate.  Braugher really elevates this show and his demeanor keeps it from just being a mess with each actor trying to top the other.  He enhances the gags by being the straight man, but also has a timing that makes him responsible for some of the best laughs.

I have to return to praising Robinson, who I hope makes another appearance soon.  The best stuff in this week's episode revolves around the hunt for the Pontiac Bandit and thus the showcase of Robinson as a comedian.  The ongoing story of Robinson's character constantly tricking Peralta to do what he wants, due to the detective's obsession with finding the car thief may follow a well-worn formula, but the guy's jokes were pretty fresh.  Sure, it was unbelievable they'd take the cuffs off him, but you believed Judy's sincerity that he didn't want to disappoint his mother.  It worked because Peralta was so quick to please Judy and so Peralta allowed him to keep up the front that he is an accomplished architect (the staple of all sitcoms) that forced the cops to play roles like Rosa as the girlfriend (someone Robinson's character tried to win over the whole episode) and Peralta as his assistant.  The best part of the gag was Rosa sarcastically pointing out that Judy should just claim he was an astronaut and then Judy revealing that space was scary and you just had to ask Sandy Bullock about that.  Sitcoms don't always have the added bonus of actually being pop culture relevant, so it felt current and funny.

Since I'm digging scenes that mentioned films, the best callback was when Peralta was trying to convince Rosa to trust him and she called him out by telling him not to quote Die Hard.  Peralta's love for '80s action pictures and his habit of basing investigation techniques based off them has been a running theme of the series, so it was nice to see Rosa spot it this time.

It was also great to actually see them try to build the relationship between the two.  Most series almost always need to have a male and female with chemistry to become romantic.  I doubt there is any intention of that happening here.  It was great to see them bond as respected colleagues, and it helped make Rosa more than the usual scary but hot cop who breaks bones.  This entire episode made her a bit more relatable and also become the voice of reason.  Peralta is still a complete cartoon, but it works because he normally learns by the end of the episode he isn't as great or smart as he assumes.

The episode had a surprising amount of sweetness that worked, because they don't linger on it for too long.  Boyle finally getting the puppies and feeling loved was a nice little tender moment that they didn't play for too much warmth.  It helps that it was followed by a crying Santiago reminding everyone she was deathly allergic and needed an ambulance.  The other heart-warming moment was Rosa confronting Peralta on his lack of respect for her and him doing the two thousand push-ups to win back her friendship.  Hopefully, their mutual respect and friendship is something continued now.

I still wish this series was on cable instead.  It would be cool to see it try to mix in some harder cases like homicide and allow for some tough drama mixed with the great jokes.  As it is, the precinct just feels like window dressing rather than the real source for stories.  It is sticking to the straight comedy likely based off the network's lack of faith anything else could garner a big enough following. It may be destined to be a standard comedy, but weeks like this prove that not only it works but it is one of the best comedies on TV.
Andre Braugher Andy Samberg Brooklyn Nine-Nine Craig Robinson FOX Review Television