The Goldbergs "You're Under Foot" Review: Time to Move On 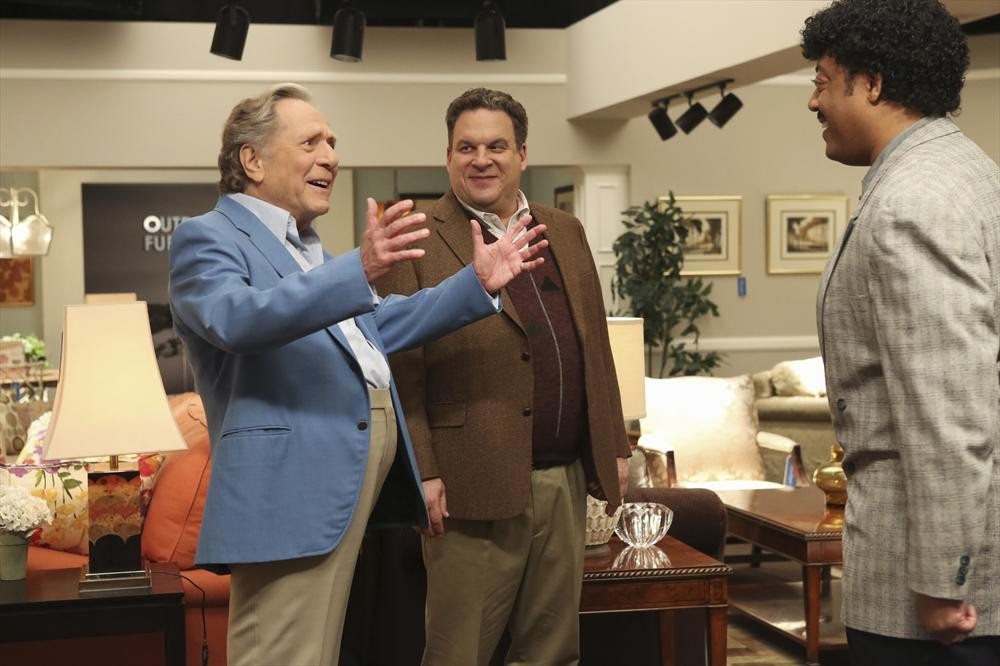 I was much more positive on the series premiere than most other critics, because I saw potential for a show with a nice mix of nostalgia, comedy, and heart.  These are the three main ingredients you need for a retro family sitcom.  I laughed out loud several times in the premiere and I thought Jeff Garlin was fantastic as the typical gruff, hardworking father trying to hide his giant heart.  The premiere was uneven but almost all debut episodes are slightly burnt and rough, and every series needs several episodes to really find its direction.

I'm mentioning the premiere, because after half a season the series seems to have started to drift away from that potential I once saw.  It is becoming formula and predictable and not aspiring for something different outside of the cosmetics of the '80s time period.  I'm no longer laughing out loud, and the constant parade of popular '80s merchandise and references is sort of losing its appeal.  Of course, I still thought it was pretty awesome to see the Thundercats and Masters of the Universe toys, and the box of Pac-Man cereal made me smile.  I like the references to things I fondly remember, but it is starting to feel like that is what holds the show together.  It just isn't enough anymore.

The influence of this show is definitely The Wonder Years. It hasn't come close to creating the same type of fleshed out character or the same feeling of authenticity.  I also realize this show isn't attempting to infuse dramatic elements, and just aspires to be a straight comedy.  That is fine.  At this point, the jokes seem to be getting dragged out of '80s sitcoms, and the formula is one we've seen too often in the past.

This isn't to say this week's episode was bad.  I enjoyed it for the most part.  I'm more deflated that the real Adam Goldberg seems content where it is creatively rather than tweaking some of its more cliché and trite elements.  Wendi McLendon-Covey is a funny and talented actress, but she plays a very one dimensional character that seems far too removed from the mother who seemed to have been ready to grow and mature in the premiere.  The Murray Goldberg character seems to have the one note joke of not being able to get his pants off quick enough once he gets home from work, and I miss the interaction he had with his children.  But again, I'm seeming harsh here, but this is mainly because I saw potential for a fresh and fun sitcom with real and fun characters.

Barry (Troy Gentile) and Erica Goldberg (Hayley Orrantia) were shoved into the background this week.  There only purpose was to convince Adam (Sean Giambrone) to ditch the toys, and then to be berated by their mother for doing such a thing.  I actually think Orrantia has a lot of potential and a future, so it is unfortunate she tends to get the smallest stories.  Gentile has some pretty solid comic timing, and I actually find him easier to handle than the constant squealing from Giambrone.  His best material this week was showing Adam how to walk through a cologne spray, so essentially, he had nothing.

The major Adam storyline this week was his attempt to become a man in order to win over his crush, Dana Caldwell (Natalie Alyn Lind).  I could relate to the whole battle over giving up the things that attach you to your childhood and try to convince yourself what must be done to move on to the next stage of teenhood.  I got a kick out of him wishing farewell to some of his toys.  But I think it would have been better if there was a bit more of that young love awkwardness between Dana and Adam.  You never really got the sense he really cared enough for her to give up something so important to him.  Though I also did enjoy the fact that in the end he essentially shut the door on her face so he could play with his returned toys.

I hope they decide to try to further the Dana and Adam relationship.  The show desperately needs more supporting characters.  Hopefully, this could be the Winnie and Kevin for this series -- something sweet and innocent.  Plus Adam really does need to interact more with people his age, and so this could at least be the person that allows him to experience all those wonderful pre-teen awkward moments.

The theme of the episode was about the need to move on.  Naturally, we had Albert (George Segal) suddenly deciding after 10 years that he wants to start running his furniture business again.  This seemed like a forced storyline to just do parallels with Adam.  The difference being Adam decides he isn't ready to let go, and Albert finally giving up the necessary 2% ownership to Murray.

The secondary story had some fun moments.  The old, sexist commercial that Albert was oblivious that it was offensive and inappropriate was a decent gag.  The even better bit was when he tried to do a modern commercial and was so proud he saved money by purchasing rather than renting the straight jacket.  As a whole, I didn't really get the point to the whole storyline since prior to this episode it never appeared that Albert was unhappy with his life or wanting to work again.  He never really showed sign of such extreme sexism either.

Maybe that is my biggest problem with the series.  Nothing really seems to stick from week to week.  It is all just a series of episodes, and it feels like they don't need to be watched in order.  Yet this is supposed to be a coming-of-age story and about how Adam deals with his family and adjusts through the '80s.  He never really seems to change or learn anything.

Despite all my criticisms, I am not quite ready to move on either.  I still see potential in this little show.  Every week there is still a glimmer that something special is going to bloom at any moment.
Review Television The Goldbergs