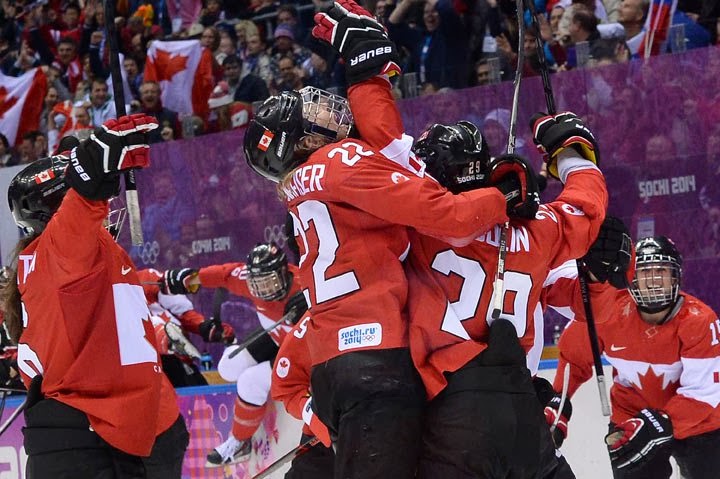 I've already declared the Olympics as some of the most exciting and compelling entertainment on television.  Part of that comes from seeing athletes who have gone through great adversity and challenges in order to have those 15 minutes of glory. Another part of the compelling nature comes from the endearing human nature stories that include the video packages that showcase support given from families. There are also the unscripted moments of athletes from other countries come alongside competitors to assist them. I also have to confess that a good portion of the drama and excitement just comes from cheering on my home country of Canada and seeing them pull out spectacular victories.

I've been treated to a lot of those great moments at this year's Olympics. I had already mentioned in my Collective Publishing article the heart warming and inspiring victory done by Alexandre Bilodeau who pulled off the first ever successful gold medal defense in freestyle skiing. It was just as thrilling in women's moguls to see Justine Dufour-Lapointe take home our first gold medal of the games while being able to share the podium with her sister Chloé who won the silver. Charles Hamelin being another great athlete to repeat the magic from Vancouver by winning gold in 1500m short track speed skating and following it up with his now trademark post victory smooch with girlfriend Marianne St-Gelais. A come from behind victory is always a wonderfully sweet thing, so it was a thrill bigger than any sports movie could capture when Kaillie Humphries and Heather Moyse jumped into first place and captured the gold in bobsleigh with their final run. At the same time, domination can be fun sometimes too, so it was incredible to watch Jennifer Jones lead the women's curling team on an undefeated run that rocketed straight to the top of the podium.

All these moments were exciting and had a happy ending for those rooting for Team Canada. It made for good television and all deserves to be on any highlight reel about Canada's competing at the Winter Games. In many of these cases, there were great stories about these athletes overcoming adversity to rise to the top of their sport.

But when we think sports in Canada, most think hockey. Not to downplay any of the great moments prior and Bilodeau has proven that engaging stories can be remembered and will make an amateur athlete into a star. One of the big focuses today was the Canadian women's hockey team going to war with their biggest rivals the Americans for that oh-so-pretty gold. The Americans held seven straight international wins over Canada. Of course, Canada had three straight gold medals to their credit before today. It isn't too hard to choose which of those two feats matter most.

Especially since one of those streaks has been broken, and the Canadian woman are without a doubt currently the most dominant team in Olympic hockey with their fourth tasty gold medal to be added to the trophy case.

A victory is a wondrous thing. A blow-out causes the heart and breathing to be more regular. It is always sweetest when it is a hard fought win that comes right down to the wire. It is why motion pictures always script victories to rely on that final shot. It is exciting to see a team battle right down to the end and emerge against all odds to be champion.

The women's hockey team not only showed how to win, but they did it in the most adrenaline pumping fashion you could ask for. They did it by coming back from a 2 goal deficit with less than four minutes left in regulation play. Considering how the Americans had been playing up to that point, it was fair for most to think it was time call it an afternoon and get ready for dinner. The Canadian women wanted to make it a classic game with the most nail biting finale possible. They surprised with two goals in a short period of time and sent this game into sudden death overtime.

The period that shows up in almost all sports movies, but rather rare in the real world.

If you're going to win in spectacular fashion then overtime is the way to do it. In an extra period that at first looked to be an American domination, the Canadians fought to not only make it riveting television but capped it off with a happy ending I wanted. It was likely the goal that caused most of Canada to erupt into cheers. Because really, who was working when championship hockey was being played.

Women's hockey doesn't get much recognition out of the Olympics. There isn't the same fanbase for their leagues. This is their pinnacle and crowning moment. Since this is the main event of women's hockey, it has a lot higher stakes than the men's since many of their Olympians get a chance to shine on a nightly basis in the NHL. Marie-Philip Poulin delivered the sweet goal and became yet another great inspiration from young hockey players across Canada. Today she is a well-deserved sports hero, and a reminder some of the greatest moments of sports come from outside the professional ranks.

Real sports can provide some of the best drama and action in all of entertainment. Sometimes it creates a script that is better than anything a writer can come up with. This was perfect television -- if you're Canadian. It had the golden victory but was done in a way that couldn't have been more captivating. A come from behind victory in an overtime where I spent possibly 15 seconds in my chair -- that is only because I don't have the ladies' endurance.

Take pointers Canadian men's hockey team. This isn't only the result I expect against the Americans, but this is how you create one memorable game.

Congrats ladies. I'm glad I could support you and lead you to victory by jumping up and down in my living room like a sugar fueled orangutan.
Gold Medal Hockey Sochi 2014 Olympics Sports Sweet Victory Women's Hockey