Did the Original 'Hot Tub Time Machine' Steal an Idea from the Past? 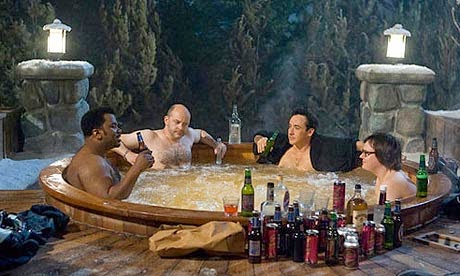 Earlier today, Scott insinuated that Hot Tub Time Machine may have stole its premise from an episode of Harvey Biurdman, Attorney at Law. A quick Google showed that he isn't the only person to stand by such a belief. But I'm not entirely convinced. So, I fired off an email to Scott with my reasoning of  why I think it isn't fair to assume it is too much of a coincidence for two writers to use a hot tub as a way to teleport through time. I essentially don't think it is as novel to only be one person's idea as some think, but rather a fairly obvious choice for time travel.

And since I then needed justification for interrupting my work to write a raher pointless email, I now publicize my argument in favoure for Hot Tub Time Machine not being an intentional rip-off.


I was thinking about your throwaway comment about Hot Tub Time Machine having the exact same premise as a Harvey Birdman episode and how it was too similar to be a coincidence. While you may very well be right in your allusion that the episode heavily inspired the genesis of the picture, I don't actually believe that it has to be the absolute and irrefutable fact you may believe.

Hollywood has a long history of similar movies coming out at the same time and there being enough evidence that it often was just a zany coincidence (Critters was released after Gremlins but started production long before and Gremlins was actually initially inspired by a script for a E.T. sequel).

I've used as an example before of how Stephen King was dismayed to discover that Under the Dome, a novel he has an idea for since the late 1970s, shared the premise of a small town trapped under a glass/see-through dome with The Simpsons.

I find premises can often be startlingly similar, which is why having an idea for a story is entirely different than writing the story. Ideas are easy and sometimes can sound exactly like something else even if you don't know the source material.

I haven't seen Hot Tub Time Machine or the episode in question, so I can't say if anything but the premise is similar. But I actually think that coming up with a hot tub as a time machine isn't that far-fetched.

A hot tub is a pretty retro item that brings back memories from the 1970s, sort of like a water bed. The idea that it is a nostalgia item is pretty accepted among most. So, an object that already causes nostalgia and memories to flood back or make one think about the past seems pretty prime for being the catalyst of time travel since it already does it at an abstract and subconscious level.


Plus as one who has spent too long in a hot tub, I know one can get a little woozy and if you add in alcohol it can be even more mind tripping. The notion the hot tub can transport is already something a drunk college frat kid is aware can happen. So, you just add in it becoming a literal thing and you have your two premises of the movie.


I can definitely see more than one writer easily coming to this idea if the starting point was trying to think up a way to get characters traveling through time in a non-traditional way. The writer is now just seeking out known items that would work that aren't the Delorean.


Maybe this can be something we debate on the podcast if we're dying for filler or if this email has riled you up for chattering.