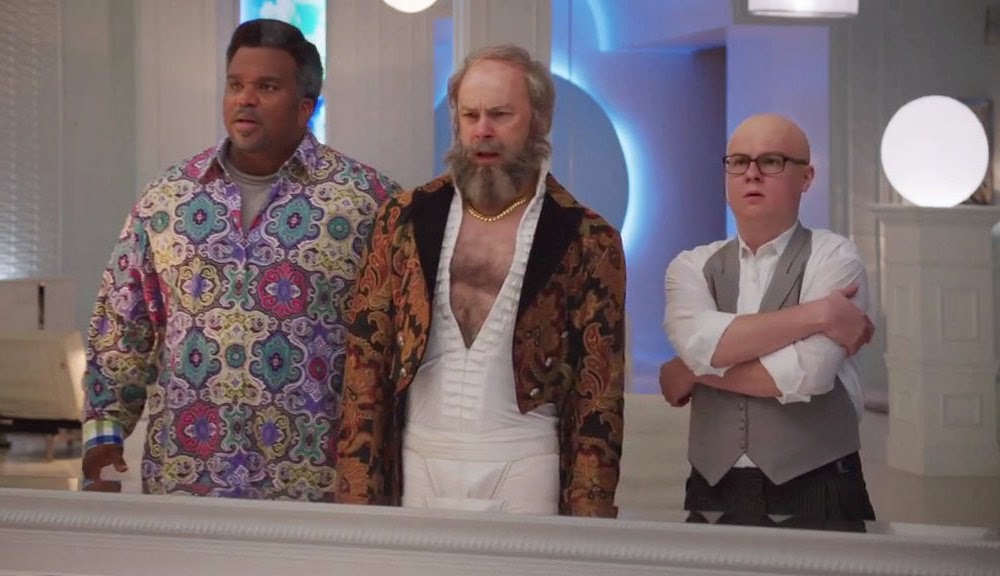 Even though Scott doesn't mention it, Fifty Shades of Grey is currently the heavy favourite for winning the box office weekend for a second straight time. Though based off Scott's write-up, part of that may be coming from a lack of competition appealing to the masses despite being a relatively loaded week with three wide-releases. I also want to note that I've been aware Bonnie Tyler sung "Total Eclipse of the Heart" for a long time now, even if that knowledge gave me nightmares.

Personal confession time.  For some reason (most likely due to the gravelly, two pack a day voice) I always believed that "Total Eclipse of the Heart" was sung by Stevie Nicks. Turns out I was wrong.  Bonnie Tyler brought that beast home in a video that at times reminded me of David Brent’s "If You Don’t Know Me By Now" (on account of the releasing of the doves and the windswept everything), except Bonnie Tyler’s video had ballet ninjas, so it loses points.

My apologies for getting sidetracked right from the get-go, but this week there are clichés hitting the theatres along with an uninspired sequel. The clichés being The DUFF, and McFarland USA, although they look like they may be fun films. The uninspired sequel that I was referring to is Hot Tub Time Machine 2.

This is a case of not completely being sure as to why a sequel was forged ahead with in the first place. The original film had a worldwide gross of $64 million against a production budget of $36 million. In no terms can this be called a success with its theatre run not gaining enough traction to make the film profitable. The only assumption that I can make is that the digital and hard copy sales of this film were enough to persuade Paramount into attempt the second, this one with a much more modest budget of $14 million.

This film is all about the gimmick, the off-the-wall concept that carries it from joke to joke (kind of akin to fellow time travel flick Bill and Ted’s Excellent Adventure). Most people don’t know this, but the zany idea in which this movie is based is not exactly original. As far as I know, the concept first appeared in an episode of Harvey Birman: Attorney at Law, when Potamus installs a hot tub in his office. I find it hard to believe that the film came up with the same insane idea about a soothing bath that propels occupants through time.

The first film opened to $14 million, and I have no reason to believe that the sequel will be getting the same kind of numbers. John Cusack, one of the stars from the first movie, is not returning, and the lack of a central cast member can deflate the value of the film to its core audience. Also, if we look at how this movie is holding up on Rotten Tomatoes (13% at the time of writing this) the future is bleak for this comedy.

From a comedy we go to one of the more overused genres in Hollywood, and that is the inspiring true sports story. Take a high school setting, add in a group of misfits, tag on the Disney name, a pinch of Costner, and season the trailer with a U2 song. That is what we have with McFarland USA, a film where originality is a concept cared not for. However, even with the hitting of familiar beats this movie is appearing to bring some heart and emotion and is sitting well with critics (78% on Rotten Tomatoes).

What is kicking this movie down is the limited awareness that it has. Right now the Facebook page has less than 30,000 likes and it is not getting much Twitter traffic. I do see this movie opening in a similar range to Million Dollar Arm, which broke out of the gates at $10.5 million.

And lastly we have The DUFF.  If you are like me and are wondering what ‘DUFF’ stands for, it is ‘designated ugly fat friend.’ It is the premise of the ‘ugly duckling’ high school student who mayhaps end up transforming into the desire of one of the cool kids. It is based off of a young-adult novel, so it could be relying on fans to come out and support it, but it may be out of luck.

A number of sites that I view in gaining an understanding of how films are tracking reference Vampire Academy here. The series of six books have sold more than eight million copies, something that could give indication that support for a film version would exist. What we ended up seeing was something far less than spectacular as it opened to just shy of $4 million. There are many attempts at transferring young-adult literary properties into film format and the road is covered with the discarded carcasses and shattered DVD cases of numerous failures.

Also hindering the movie is the lack of a noticeable star. The lead is played by Mae Whitman, whom I loved from Arrested Development, but has not been front and centre before. Even having such an acclaimed show on her resume says next to nothing as the series (which is one of the most brilliant comedies ever broadcast) had difficulty getting masses of eyeballs to check it out. This could be another example of why you can’t make a movie based solely off of success as a young-adult book.