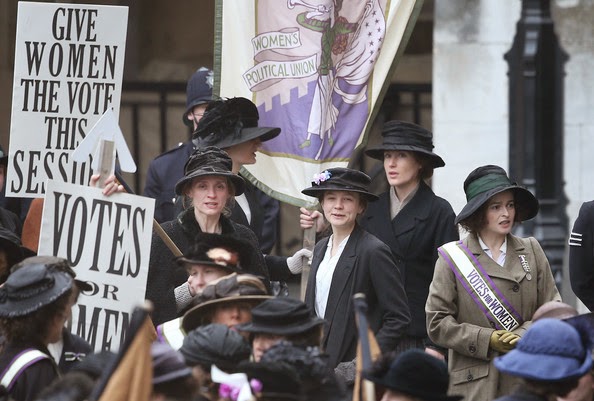 There was a great deal of frustration over the past Oscars that were mostly a celebration of white men. Selma was the lone Best Picture nominee that wasn't about a white male's problem and conflict. So, there is hope that next year has a much more diverse slate and even more importantly, that studios trot out a greater deal of diversity during the supposed prestige picture months in the fall.

It looks like Focus Feature will try to do their part as they're now the distributors of Suffragette and will be releasing it domestically in the fall. You consider we also have Netflix's upcoming Beasts of No Nation that also is considered a strong Best Picture contender (though in both cases the prognosticating comes from sight completely unseen) and there may be a chance for some actual diversity at next year's Oscars. In both cases, we've got movies if done properly will be thought-provoking and challenging and spark discussions about important issues.

Suffragette, much like Selma, will be a historical drama but through its storytelling will act as a tearing of a Band-Aid off the festering wound of issues that still exist and need to be tackled. Suffragette will be looking at a group of women's major push for the right to vote in the early 20th century Britain and will more specifically look at the militant actions that needed to be taken against the state to push change. As a grander theme, it will likely speak against how society perceives and treats women as second class individuals and have some unfortunate real relevance to today (almost makes me wish Patricia Arquette was cast).  It doesn't seem to be about any specific historic event outside of the broader movements of the time but will have iconic real life people like Emmeline Pankhurst who was the leader of the suffragette movement in Britain.

It will likely be billed as a drama, but the plot of a working class mother being lured into the fight and then the group needing to go underground when the State starts to us force has the makings of a thriller too. Though this obviously is Focus Feature's big hopeful for Oscar contention, I'm hoping it doesn't fit standard biopic or historical drama beats but rather attempts to be closer to a Selma or Lincoln with a tight focus and some diversion from the trusted formula. I'm completely unfamiliar with director Sarah Gavron's past work but writer Abi Morgan has a pretty respectable portfolio that includes the critical hit and the movie that established director Steve McQueen in Shame. Plus it has a pretty amazing cast to back it up.

Actually, even if Suffragette turns out to be a disappointment, it already has locked in at least one Oscar nomination with the casting of Meryl Streep as Pankhurst. Good or bad, the Oscar rule is Streep gets nominated for whatever picture she is in during the fall. August Osage County and Into the Woods may have not quite been at "Oscar Best Picture" caliber but Streep still warranted a nomination largely because she was Streep. Yes, I'm being jaded and cynical here, and I realize she is an icon, but sometimes it feels like she gets the nod for just being willing to be in a movie.

If the material is strong then Streep will likely be awesome. The attention she warrants will be worthwhile because it hopefully will also cast a spotlight on Carey Mulligan who is starring in the movie as the aforementioned mother. Mulligan is a superstar talent that just isn't known enough to be an actual superstar. This picture could be her biggest break for exposure and definitely awards recognition. Her most well-known movie at this point is likely The Great Gatsby, but she has proven her diversity by playing very different characters in great movies like Inside Llewyn Davis, Drive, Never Let Me Go, and An Education. She also is starring in Far from the Madding Crowd this May that has potential to at least be a bit of a sleeper hit if Fox Searchlight is brave enough to make it real counter programming against The Avengers: Age of Ultron.

Suffragette will likely get the slow roll out treatment where it starts out at festivals (might even debut at TIFF), then get a limited release end of September or start of October with eyes of going wide at the end of that month. Considering the demographics that frequent the cinemas now and that it is during the time people want to see prestige pictures, I'd predict this ends up being a pretty solid hit at the box office or at least do better than most of the Best Picture nominees from last year (besides American Sniper).

I'm pretty stoked for this one (would have made my most anticipated of the year if I knew about in January) and intrigued to see what type of slant and direction the crew goes. The material is rich and provocative. The talent is pretty undeniable here, and I didn't even mention the likes of Helena Bonham Carter and the greatly underrated Brendan Gleeson. Consider this one of my early predictions for an Oscar nomination and one to capture all kinds of buzz in the fall.
Carey Mulligan Meryl Streep Movies News Oscar Contender Suffragette