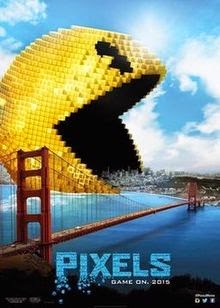 Besides substantiating and over-analyzing every single Star Wars rumour possible, the other great past time of writers on film is bashing Adam Sandler. I'm pretty sure if someone actually tried to praise a mainstream Sandler picture that a fleet of flying monkeys would be ordered to attack that writer's home. I kind of like monkeys and who doesn't appreciate the power of flight, so I try to defend the actor when I can even if his last several years of shooting around paid vacations and advertisements posing as features can make it hard. I have to admit that I have some anticipation for his latest movie, Pixels, and now, we have a look at what will be his final theatrical picture before entering into his four movie Netflix deal.

It is pretty fair to criticize Sandler for churning out almost identical movies in the last few years with either no plots but just set in a warm and beautiful location (that most would love to vacation) or plots that are pretty indistinguishable that revolve around Sandler being a complete ass that at the end turns out to be oh-so lovable. This past year may have brought forth the pretty bad Blended but it also saw him try a few different things in Men, Women and Children and The Cobbler. Sure both of those pictures ended up being critical flops, but the key point is that Sandler at least tried to challenge himself and do something different than just his typical big studios summer comedies.

Pixels seems to usher in a potentially new era where Sandler breaks out of the comfortable mold he formed over the past decade and make pictures that are far more ambitious and more served to justify his ludicrously high budgets (for a comedy). While this is still a comedy, this is Sandler's first real foray into a special effects sci-fi action picture. The other shift is that he may have learned from his Grown-Ups success by sliding towards ensemble cast pictures. Pixels is clearly not just a straight Sandler starring vehicle as he'll be sharing the screen with Kevin James, Peter Dinklage, and Josh Gad. His follow-up picture to this will be the The Ridiculous Six, which is also a genre mash-up of comedy with Western and also an ensemble with assortment of name stars. This may be the direction Sandler takes for the near future as he tries to rehab his career (which I realize is a silly statement since he has enough power to have landed a sweet deal with Netflix but he just isn't the massive box office draw he was a decade ago).

The concept is a great deal of fun and actually the potential so far is way more fun than the actual trailer. The idea is that aliens misinterpreted 1980s video games as a declaration of war (maybe that is where all those E.T.: The Video Game cartridges ended up) and attack Earth in the form of those iconic characters. Just like the world needed oil driller to take out a gigantic meteor, it now needs old-school arcade wizards to whip out their well-exercised thumbs to save humankind. It is a pretty brilliant idea that makes me chuckle every time I hear it and also plays on the nostalgia of the age group that still dares to trek out to the cinemas. Wreck-It Ralph was a lot of fun to see iconic Sega and Nintendo characters interact on the big screen, and there is just as much potential for zany fun with some old-school Atari and ColecoVision character battling it out with some goofballs.

This picture immediately makes me think of Ghostbuster, which is probably the most popular and well-known special effect bedazzled comedy that mixes laughs with action sequences. The truth is that comedy and big special effects almost never work, and Ghostbusters was a shocker to most critics. 1941 is notoriously known as Steven Spielberg's first major flop and lot of that is due to the comedy not blending well with major set-piece and special effects. The action tends to overwhelm the characters that the audience must connect with in order to elicit laughs. Ghostbusters worked largely despite the effects, because Ivan Reitman knew well enough to focus on the characters and allow personalities like Bill Murray to shine through. It is more of a character-driven movie than a big special effects spectacle. The only other really big example of a special-effect sci-fi comedy working is Back to the Future, even then it is more of an intimate character comedy that is just book-ended by some impressive special effects.

Not to shortchange the actors here but they aren't exactly in the league of a Bill Murray, and there is a chance they'll get overshadowed by their 8 bit adversaries. I do think Sandler has a sharp wit and Dinklage has proven to be a lot of fun (he is the best part of the uneven Knights of Badassdom), but there isn't evidence of the personalities coming through. Right now the entire focus seems to be on the fact Pac-Man and Donkey Kong are destroying major cities and there isn't any sign of a focus on the characters or even attempts at comedy.

Of course, the selling point is the gimmick and a trailer isn't a movie. Even though I'm a little flat on what has been shown, this could be all kinds of riotous fun. The references to classic video games will be amusing and the key is allowing some characters besides the video game characters to get a chance to shine. The movie at least crushes the criticism that Sandler is just coasting and isn't trying to do something new.  Put me down as looking forward to reviewing this one and hopefully, finally give Sandler my endorsement for the first time in far too long.