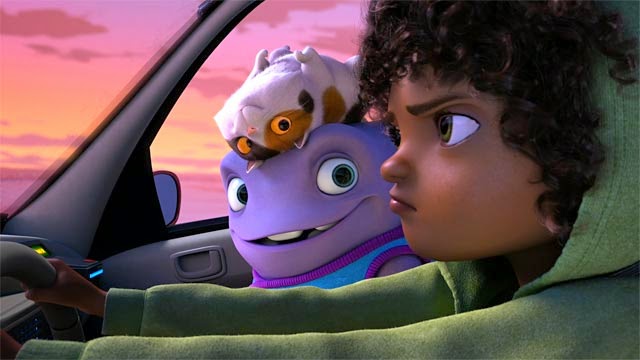 We're in our final weekend of March and that means fast approaching are the studios big guns that will be shooting for massive box office returns. But before then, we have two wide releases looking to win people over that are either hankering for some prison rape laughs or a warm relationship between a young girl and an awkward alien. The theme of the weekend is togetherness. Scott serves up his predictions of how these new releases will fare.

Sitting down to write the predictions, I had initially thought that I was going to toe the line this week and follow a little more closely with what the common analysis is. For the last two weeks I have made some deviations, some of which paid off, and others which did not. It is a cruel mistress, this predictions game. Many different and reputable sites have both Home and Get Hard poised for a neck and neck battle to place in or around the mid thirty million range. And, once again, when it comes time to put my words where my mouth is, I cannot fully jump aboard.

Before I get into my dissension, I side with popular opinion on the chances for DreamWorks Animation’s Home and its chances for success. It is sad to say that landing over thirty million would be good for the film considering its weighty budget of $135 million. Because of DreamWorks misses in the animation department over the past few years, they have altered their number of projects per year, but it would appear that no note has as of yet been made in regards to the budget. The trailers for this film attempt to boast a sincere fun between a young girl (voiced by Rihanna) and an awkward alien (voiced by Jim Parsons). It looks very bright and fun, and is an attempt at an original property.

Two years ago they were able to hit the mark with The Croods, earning an opening weekend of $43 million before they returned to the late-March slot with Mr. Peabody & Sherman, which had less life and opened just over thirty million. Are the days of DreamWorks Animation’s films being highly anticipated over and done with? There should be no counting anyone out yet, but the fact that this is their only release of this year is not a good sign. There may have been some creative mishaps along the way, but I’m a numbers guy, so I will point to the stats that may indicate part of their struggles.

Since Flushed Away in 2006, every single film they have made has had a budget of over $125 million, and 63% of those being over $145 million. That means that even their cheapest films, would need to roughly take in around $275 million to cover their production budget alone (that’s not counting the millions spent on marketing). Perhaps as they search for ways to keep going they look at how much they are investing per film.

And, this is where I pull away from the crowd. There is a very good chance that I could end up looking like an idiot over this, but I am willing to take that chance. Opening opposite the animated DreamWorks feature is the aforementioned Get Hard, which pairs up funny men Will Ferrell and Kevin Hart. I have to admit that ever since seeing the red band trailer I have housed a personal curiosity and interest for this film. It would seem that I am not the only one, as it had 10,222 tweets about it the day before opening. That’s a bad number for a film about brooding teen vampires, but decent for an R-rated comedy. However, what keeps me hesitant around the success of this film is the recent performances of both parties involved.

While Hart had an outstanding opening weekend in Ride Along (at $41 million), it could be that over-saturation is becoming an issue. Think Like a Man Too had an opening frame of $29 million, and The Wedding Ringer was much softer at $20 million. It has not been much better for Ferrell, whose The Anchorman 2: The Legend Continues and The Campaign both opened at $26 million. I think there will be a decent response to Get Hard, but I tend to believe that it will not crest the $30 million mark.

And finally there is the horror film It Follows, which is coming off of a successful in limited release and is being expanded to approximately 1,200 theatres. There is much critical love for this flick, and it will now come down to just how much public awareness there is of this terrifying little darling. It averaged $40,000 per theatre in its opening weekend in four theatres, and was bumped to 32 theatres last weekend, averaging $10,000 per theatre. I am predicting that through its expansion it will end up around the $3,000 average.