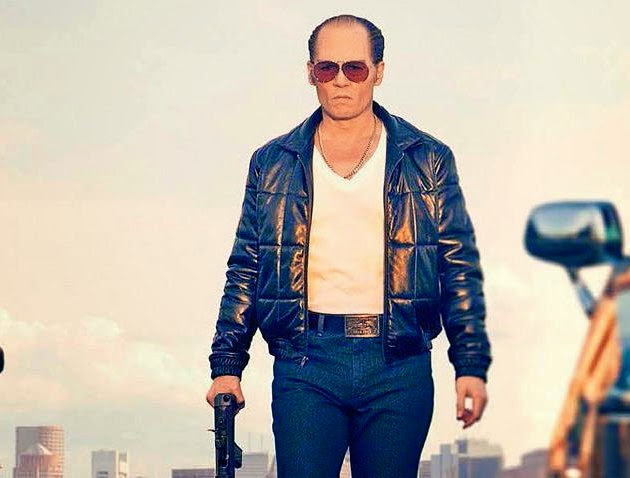 Black Mass has been highly positioned on my most anticipated pictures of 2015 just based on the promise of Johnny Depp playing one of the most notorious criminals in American history, Whitey Bulger. Based entirely off the two minute trailer (as far as I know the movie won't be screening anywhere until the fall), many movie critics and pundits have already marked Johnny Depp as a lock for an Oscar nomination. The Academy does have a soft spot for actors who physically transform themselves (unless there name is Jake Gyllenhaal) and make major overhauls to their physical appearance. Depp isn't really a stranger to changing his looks and putting on costumes, but this time he isn't a swaggering pirate or whatever the hell he was supposed to be in Mortdecai. The very exciting thing is that Depp is finally taking on a very dramatic role and playing an unrepentant, ruthless criminal in what should be a hard-nosed, violent, provocative drama.

It has been too long since we've had a good crime drama, and this feels like at least in tone to follow the lead of the classic Goodfellas. The protagonist of this story is a violent and irredeemable psychopath that terrorized Boston and one of the more controversial figures in American history. From the brief clips, the picture seems completely willing to allow Bulger to be vile and not try to make him relatable or justify his violence. Making a dislikable protagonist that you must follow for over two hours is a hard thing to actually pull off in cinema. Martin Scorsese is one of the few masters who can create complicated and unforgivable protagonists but keep the viewer riveted. Black Mass is bound to be compared to much of his works, which I'm doing already and admit isn't fair.

Director Scott Cooper has two features to his credit in the critically acclaimed Crazy Heart and the rather disappointing Out of the Furnace. One thing Furnace has is a strong atmosphere and it isn't afraid to be very dark and showcase complicated characters. I trust Cooper to embrace the complexities of Bulger and not try to dial things back. The scenes demand to be uncomfortable and disturbing.

The trailer also has a great sense of style cutting to Bulger's violent acts in-between a very awkward dinner conversation. Even without the slick edits, the scene at the table looks like it has potential to be a classic and has loads of tension. Plus it also likely works as foreshadowing for things in the future. The scene also shows the inauthenticity of Bulger as he becomes an infamous informant for the FBI (largely believed to have done it to take down his rivals).

Depp does look great here and this may finally be the redemption he's needed over the last few years. He is a great actor that many have lost faith in due to his increasing acceptance of cornball roles. This is drastically different than anything he has really done. This looks like it can be a fast-paced and stylized adult drama. From the brief clips, there is a strong potential this could be a runner for one of the best of year. Yes, it is yet another biopic but a dark and kick your teeth in type of movie that has become increasingly rare in Hollywood. Consider my excitement appropriately ramped up.
Black Mass Johnny Depp Movies Review Trailers