'Jurassic World' Trailer is Chewing Away my Excitment 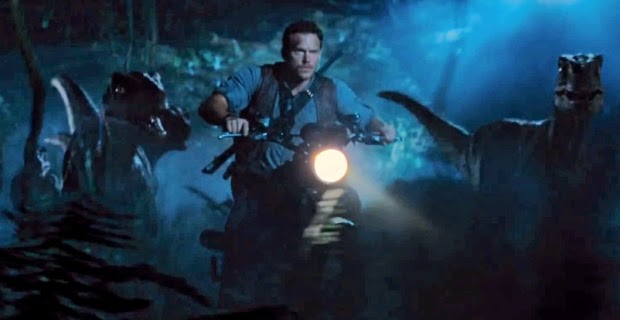 Jurassic World is one of the most highly anticipated big special effect spectacles of the summer from a franchise that somehow continues to have incredible good will and bubble up mass excitement despite only the first movie actually being great. It is interesting how much love can remain for a franchise that hasn't really earned it; it is sort of like people willing to continue going to a theme park that has rides that turn you into the main course.

In my review of the original Jurassic World trailer, I compared it to the Jaws franchise as both have a classic original movie but never really had the material for a sequel because no matter how it is jazzed up, it will always be the same running/swimming away from a carnivorous predator.

The one major plus is Chris Pratt is dripping with charisma. From what can be seen in both trailers, he plays a perfect balance of humour and intensity. He easily shifts from a "I realize this is all ridiculous" to having the chops of a real action star. A perfect casting for the silly, over-the-top Saturday matinee adventure hero that this script clearly demands.

On the downside, Joss Whedon seems to be rather correct that Bryce Dallas Howard has been left with being the picture's dull stick in the mud. Her job seems to be rolling her eyes at the charming and lovable Pratt and try to defend why she stupidly made a genetically enhanced dinosaur that is now killing all the other attractions. I had hope from the previous trailer where she was wielding a safety flare she would kick ass, but her greater purpose seems to be the humorless, egotistical, workaholic female who either needs to be saved or gets eaten for her mistakes. She doesn't even get to be the smart one as Pratt has to inform her about the fact that dinosaurs hunt and this is why everything is going to hell.

To be fair, despite the fact I'm in agreement with Whedon on this, you can't really judge the character off a trailer or clip. There may be whole lot of story missing here and Howard's character may turn out to be far more important. It doesn't look good here, but maybe the marketing team is scared a strong female will cause all the fanboys to cower in their mom's basement or spend time engaging in Twitter wars against female celebrities instead of going to the theatre to see the movie.

I was pretty overjoyed with the announcement that Colin Trevorrow was directing and Derek Connolly was writing as they were the same team that made the critically lauded comedic drama with sci-fi sprinklings in Safety Not Guaranteed. It gave hope for a character-focused tentpole that doesn't forget we need to care about those running from the giant hungry dinosaurs and the people in the end are more important than the CGIed monsters.  Failing that, it would at least have a sense of humour.

The sense of humour seems to be intact, but this trailer is absolutely ridiculous. Pratt leading a velociraptor army, a pterosaur making off with a park patron, large dinosaurs being eaten by giant dinosaurs, somehow every creature got out of it cage once again, guns blasting everywhere while body fly and I'm sure the dancing dinosaur with a top hat is being saved for the movie. It is all absurd and that can be a glorious thing actually, if the insanity has a focus and a story. But the trailer is just a collection of quickly churned out craziness. If the movie tries to keep that pace with non-stop dinosaur stomping with nothing but Pratt's snark to substitute for real characters we care about then this is just Transformers replaced by giant hungry lizards. It need pacing and atmosphere, but I'll say it again, people we want to cheer.

Pratt is oozing personality to spare and I still trust the instincts of Trevorrow and Connolly. Even if this trailer is just a flurry of images from someone's dream after a binging of rocky road ice cream sprinkled with Doritos then chased by whiskey, I have faith there is still a heart, real story, and characters to be found. No matter what I foolishly think, this is still going to be an insane hit.
Chris Pratt Jurassic World Movies Review Trailers