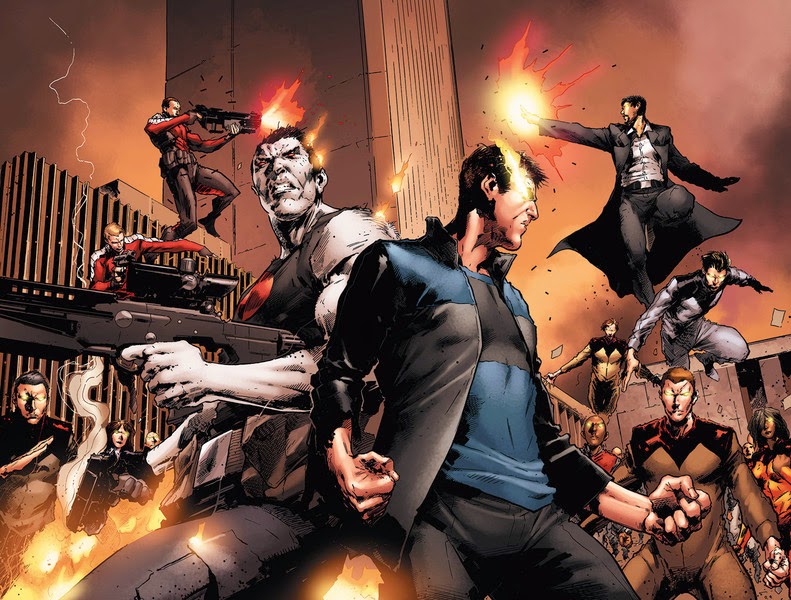 Sony Pictures has been the snotty nosed kid on the school bus promising anyone who walks by that they could go to their birthday party if you'd just sit with them when it comes to the great big race of creating a "cinematic universe." They've tried or may still be trying to do that with Spider-Man as they've promised a Sinister Six and a Venom movie as well as some still to be mentioned female super hero picture based in the Spider-Man universe along with obviously more Spider-Man sequels. Of course the mass disappointment of The Amazing Spider-Man 2 has stalled that party and now that they're loaning the hero to Marvel and shoving him back into high school, it seem like at least some slight white flag waving over Spider-Man being their launching pad for a humongous expansive universe that launches countless spin-offs.

Failing that they still have eyes on the big cinematic universe Robin Hood that also every other studio is yearning for, because apparently, we don't live in a world where we've had an endless stream of movies based on that character and had a flop directed by Ridley Scott and starring Russell Crowe a few years back. Also it is best to ignore the fact that The Lone Ranger and John Carter proved that recognizable brands that reigned on radio and serials don't mean modern hits.

All this shows that Sony really wants to play the game that Marvel studios has mastered and will desperately gobble up anything that can lead to a big "Avenger-like" accumulation movie after a string of successful build-up movies. Sony will do it even if it means being in bed with a smaller comic book company like Valiant. This isn't to say that Valiant isn't a successful company, but they sure aren't Marvel or DC. Unless you're a major comic book fan, you likely can't name a single character created by the company. It seems like a gamble to have major box office dreams riding on a smaller comic book company just because Marvel (a brand even non-comic book fans knew about before it became a major movie studio) is now a juggernaut.

Sony hopes movies based on any comic book series are enough to launch a major franchise. They have hopes the big cinematic universe dream will come true as they launch their destined to be hits Bloodshot and Harbinger movies.

I have to confess that I don't know a whole lot about Valiant other than it followed what seemed like a big craze of the late 1980s and early 1990s of Marvel writers and artists leaving the company to create their own. I remember reading in Wizard magazine about what was supposed to be the massive rebirth of independent comics where the actual creators retain rights of their works. The company that got the most buzz was Image comics, which is best known for Spawn that also had its own TV series and movie. Though hopefully Valiant's goal isn't to make something similar to the Spawn picture.

It isn't like Valiant is setting the world on fire even if their comic books have their diehard fans. The comic book movie craze seems to be at its peak, despite what studios want to believe, and by 2017 Bloodshot might be screened to an apathetic market. I am definitely hesitant to believe there is a market for two Bloodshot and two Harbinger movies that build to a giant accumulation movie. Actually, the whole plan of doing this with two relatively unknown comics seems like a parody ripped from a Saturday Night Live sketch. Except it is sadly true, and probably would have been better severed to just see if there are fans for one Valiant movie. Of course, that isn't how the industry operates anymore, we need those 2025 dates locked up now for the fifth sequel to a series that hasn't even screened an original yet.

If Sony and Valiant believed in making a mid-budget movie with modest goals then it could be a surprise hit. Based off how crazy movie budgets have become and the fact I sense expectations are this is tentpole (even if most haven't even heard of these comics), this is going to need to be one of the highest grossing movies of its year to justify continued life. The bigger problem is these are unrecognizable characters in really recognizable stories. Super-powered beings on the run from an evil corporation sounds like something I've seen a millions times before (Harbinger). At least it seems more original than a soldier being brought back from the dead by a secret government agency (Bloodshot).

As always, I want to be made a fool and be proven wrong when slagging an unseen work. I really want to be forced into confessing my ignorance and singing the praise of the eventual movies. Even if this franchise doesn't seem to be something the masses are begging to see, it does have some incredibly appealing talent behind it so far.


Matthew Vaughn has become the master of comic book adaptations as he brought life back to the X-Men franchise with X-Men: First Class after Brett Ratner's X-Men: Last Stand squashed it. He has made some of the most vibrant and irreverent comic book movies in Kingsman: The Secret Service and Kick-Ass. He is only a producer for Bloodshot, but his name still brings lots of hope.

If directing is what is needed for optimism then it is here with David Leitch and Chad Stahelski. They rocked on the scene with last year's John Wick, which was a fast paced action picture with not only a great sense of humour but some of the best choreographed and directed action sequences in the past decade. I may not know a thing about Bloodshot or Harbinger, but Sony is smart by putting them in very creative hands.
Movies Musings News Sony Pictures Valiant