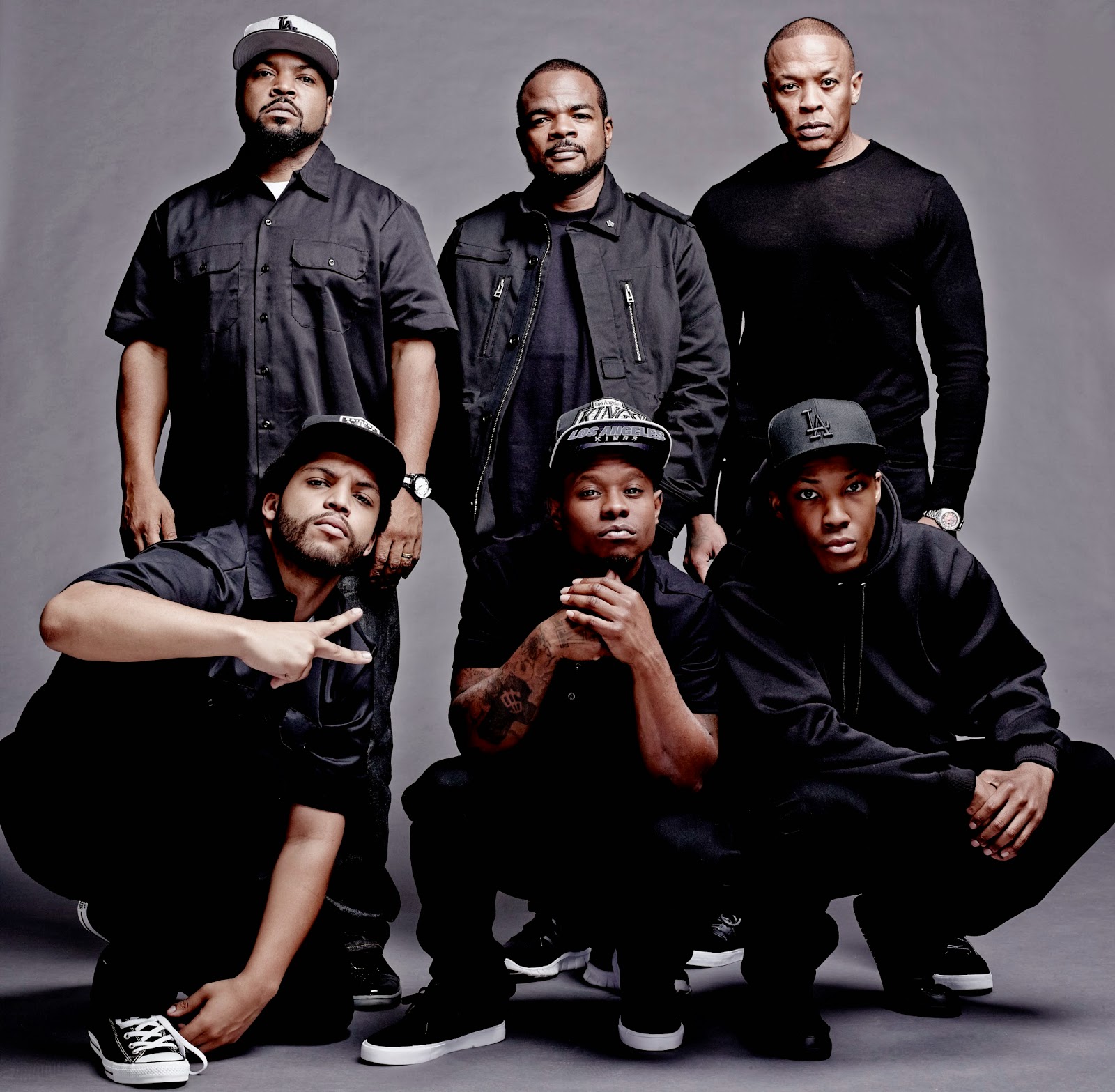 Without even a single clip or trailer, Straight Outta Compton rocketed near the top of my most anticipated 2015 releases. My adrenalin started to rocket when the teaser got dropped several weeks ago. Much like the Mad Max: Fury Road trailer that just got released, the first official trailer reveals more of the actual story. Also similar to Mad Max, I eagerly gobbled up every morsel offered.

The teaser was modeled after rap videos from the early 1990s with its rapid cuts, shots of beautiful women, and chaotic energy. This time around we have a much more traditional trailer designed to actually reveal the plot of the picture. It also means that the delivered snippets show cracks of a movie being closer to a standard biopic than hinted at in the teaser, but this is also the official mainstream trailer that is trying to draw in the average movie-goer, so that is expected. The only major reservation that I have, and I really hope it is only this overt in the two and half minute trailer, is the lazy "genius biopic" trope of several characters telling the protagonists how brilliant they are and how this will change the world rather than just showing us. I'm pretty sure the N.W.A. didn't know they were going to be rap innovators or spend their time being verbally pleasured by others drooling over them.

Fortunately, the trailer provides enough evidence that we will actually get to witness the brilliance of the artists as well. The brief clips of the concert scenes send a chill down my spine and have a raw and authentic power. The soundtrack is going to be phenomenal and big hits like this year's Fox series Empire, hopefully means this will get a true wide release (possibly become a huge "surprise" hit) but won't shy away from including some great full-length musical performances.

Now after a teaser and trailer, I'm also pretty confident it doesn't look like this picture is going to try to deify the subjects. Eazy-E, Ice Cube, and Dr. Dre did revolutionize music but the movie seems willing to show the hard-edge and hatred that burned inside them. They're a group that brought some mass hysteria to mainstream America while also ripping off the moldy Band-Aid on the festering wound that still isn't any closer to being healed. Not only are we going to see the rise and witness the message they blasted through America, but there are clips of scenes that will show the dangers and prejudiced that defined Compton thus formed them into the men they became. The picture looks at the late 1980s and early 1990s but sadly still holds great relevance and has the potential to have a social impact similar to classic pictures like Do the Right Thing and Boyz N the Hood.

It will hopefully bring that message by being authentic to the N.W.A and what it meant at the time, which means a picture that isn't safe or sanitized. This will likely knock it out of any Best Picture consideration, especially if it as uncomfortable a viewing experience -- as it should be -- as the status quo shaking N.W.A. was at its peak. Hopefully, Ice Cube and Dr. Dre even at a much older and likely less hateful age, push for a movie that stays true to the heart of the iconic rap group. I want a movie that kicks me in the teeth and rattles every bone in my body.

The trailer gives us much more of a peak into the actual performances. Paul Giamatti as Jerry Heller will have a pretty substantial role, and it will be interesting to see how Heller is portrayed considering he is often referred to as the man that broke up the N.W.A. Giamatti is knocking it out of the park from what is shown here and he is a premium talent that definitely deserves more awards-recognition than he has been given, so maybe he'll have a chance at a supporting nod. The casting of the three main members is terrific as O'Shea Jackson as his father Ice Cube, Jason Mitchell as Eazy-E, and Corey Hawkins as Dr. Dre all perfectly embody the famous members. Jackson is especially brilliant casting choice as he looks, sounds, and acts perfectly as a younger version of his father. Though the trailer hasn't revealed any clips with Keith Stanfield (who plays Snoop Dog), he is an incredible young actor (he had a stand-out supporting performance in Short Term 12) and I'm really excited to see what be presents here.

This not only will it be great counter-programming for the special effects heavy tentpole actioners that are overstuffed in the summer but this has a strong shot at being one of the very best movies of the year. I can't wait for this one.
Movies Review Straight Outta Compton Trailers