'The Visit' Trailer Bring Back Intrigue in M. Night Shyamalan 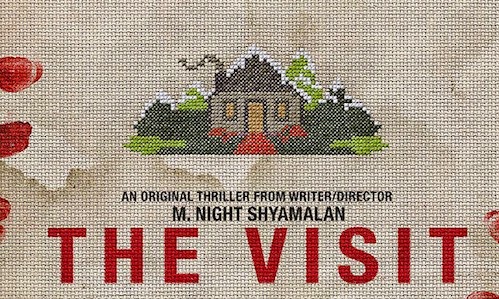 I am aware the narrative that every film writer is taking with the first The Visit trailer is the chance for M. Night Shyamalan to resurrect his career. I'm not being original here but the director taking on a micro-budget horror traps me in thoughts of him returning to his roots. Roots that signify where his greatest strengths lie and his best chance to obtain acclaim again.

It is fitting that Johnny Depp's trailer for Black Mass dropped around the same time (and both movies will be released in September). These men where once the golden boys of Hollywood but veered into becoming caricatures. Hopefully, these movies are chances for redemption.

Shyamalan's fall could be blamed on his obsession with the twist but the bigger problem was straying away from his strengths and no longer making smaller and more intimate scary thrillers. His first few movies were great less for the plot or twist and more for his ability to create a disturbing atmosphere and slowly fraying at our nerves. The Visit has garnered interest because deep down many critics remember movies like Sixth Sense and Signs, and want the director to prove he still has some of that dark magic left.

The Visit throws us into an old horror setting standby with the isolated farmhouse. The horror gets ramped up with everyone's greatest fear, the grandparents. We all remember waking up in a cold sweat while being haunted by the memories of the whiskery kiss causing mild rug burn and the smell of decade old hard caramels.

The big criticism by many is the appearance this is "found footage." I write "appears" because it contains music, professional angles, and scenes that make no sense for someone to be shooting. But after years of railing against the "found footage" genre, I've realized it doesn't matter if the camera being on makes no sense or if footage couldn't possibly been compiled a certain way. It is better to just see it as a stylistic choice and give it the same leeway we afford all fiction we enjoy.

I see signs of a moody and atmospheric horror picture here that in the trailer provided a few spine tingles. There is something wrong about the grandparents and I don't think it is just old age. But the trailer also makes me a bit apprehensive that it may sometimes slip into unintentional comedy. We've got the goofy frantic scratching at the wall and the grandmother doing her best witch from Hansel & Gretel impersonation. These over the top scenes don't work when a movie seems to be trying so hard to be a deadly serious horror.

It has something that most modern horror trailers lack and that is being genuinely unsettling. It leaves many disturbing questions like if the kids' own mom is aware and why she is so unwilling to listen and is the grandfather involved or just clinging to his "sick" wife?. It looks to be a mainstream jump-scare fest, which is a bit of a downer after seeing the slyly paced and unsettling masterpiece in It Follows. There is a market for "this place is haunted and damn, that cat made me jump" kind of movies and the trailer shows promise that this one might be one of the better PG-13 scares of the year.
M Night Shyamalan Movies Review The Visit Trailers