The World Gets the New Coke Story We've Long Demanded 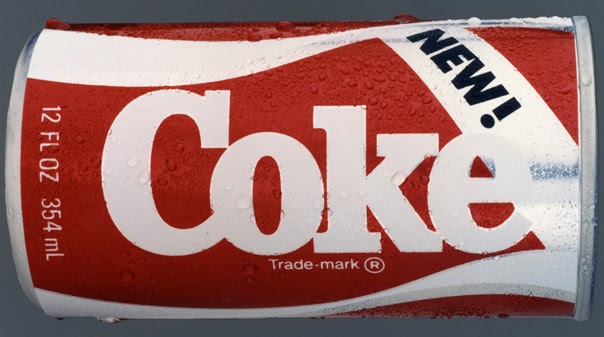 The 2015 Best Picture nominee list has made it abundantly clear what studios have decided the adult movie goers are demanding: lots and lots of biopics.  The last few months of movie announcements have given hope that studios may realize that the over 30 crowd wants to see more than that. Our dreams have come true as there are now a growing number of historical pictures about major companies and corporations.

Though to be fair it isn't like the Mark Wahlberg starring Deepwater Horizon is going to be a feature length promotion reel for BP (and there is also a strong chance the oil company may avoid any prominent mention in the movie about the 2010 oil disaster). I actually have whole lot of interest for the Michael Keaton starring The Founder, which is based on McDonald's founder Ray Kroc and how he went about getting the company from the McDonald brothers and turning it into a massive global franchise. It is being described as a dark character-driven drama similar to The Social Network and so I wouldn't expect any Happy Meal tie-ins.

The recent trend of movies about big businesses hasn't really launched as most of these pictures are still at the pre-shoot stage, but it will be interesting to see if there is any backlash from the major business in how they're depicted. Or if the level of how wide the movies are released will potentially be determined by how much the companies are skewered. It could turn out to be a Saving Mr. Banks situation where everything was done to redeem and protect the saint Walt Disney to the point they even tried to downplay his smoking habit. Of course, The Social Network is an example of a great movie that didn't shy away from a negative depiction of Facebook founder, Mark Zuckerberg.

The great dream of all global powerhouse corporations getting their own feature may be becoming a reality as one of the biggest brands in the world, Coca-Cola is getting the movie treatment. Deadline has reported that the Deadpool movie scribes Paul Wernick and Rhett Reese will be writing the screenplay about the infamous New Coke launch in the mid-1980s. The screenwriters optioned Thomas Oliver's book The Real Coke, The Real Story for the right to chronicle one of the biggest and well-known marketing blunders.

New Coke was a response to Pepsi steadily gobbling up Coca-Cola's market shares and then fears of Pepsi being the more popular drink were seemingly confirmed by many blind taste tests (I remember getting to participate in a Pepsi Taste Challenge at a beach and quickly being ushered away after choosing Coke). So, the best way to beat Pepsi was to taste just like it by being a sweetening the formula. This keen strategy fails to remember all the loyal Coke drinkers who may not appreciate the sudden taste transformation ("if I wanted Pepsi then I'd have peed in my Coke!"). New Coke was a flop right out the gate and Coca-Cola was left scrambling, which lead to Coca-Cola Classic. Of course, Classic was just old Coke but with a snazzier can and name (because I don't age, I just go vintage). Then Coca-Cola saved the world and New Coke went the way of Colecovision and ALF.

It is a really fascinating story and one that a child of the 1980s will gleefully gobble up since it was such a big part of the cultural dialogue of the time. Fiction based in the 1980s is a growing trend at the moment with stuff like The Goldbergs, Halt and Catch Fire and The Americans (and of course, all the properties from the time are being remade, why hello Robocop and Fuller House).

The Coke movie can be a big dose of nostalgia love. Tons of potential for a whole slew of other 1980s artifacts to pop up and of course, all that glorious hair and shoulder pads. Hopefully, they know to not go overboard while also embracing the time period. I'm a big sucker when a period piece does the set pieces and costumes properly and makes it feel authentic. Of course, there is also the chance it could just be a whole bunch of pandering pop culture references that don't fit into the specific time period (sorry Goldbergs, but you can't have a Ghostbusters poster on a bedroom wall and have Poltergeist debut in the theatres).

There are a few interesting ways they could go with the story too. It could either be an example of complete corporate incompetence in response to panic that then details a recovery that actually secures Coca-Cola as the soda king of the world forever and ever. Or you could play into the conspiracy theorist belief that this was all a giant publicity stunt with the plan to always return to the original Coke formula. I don't think the second option is actual reality, but it could make a fun movie with a slimy but suave Aaron Eckhart convincing executives to trust him and let him work his magic. If they did go the conspiracy route, I can't shake Oliver Stone as the perfect person to make this a dark and stylistic take down of business practices that would blend drama and thriller.

I'm guessing Stone isn't the frontrunner to helm. Considering the scribes also brought us the screenplays for Zombieland and G.I. Joe: Retaliation, I'm not convinced we've got a drama or a movie gunning for Oscar nods. This may be a broad comedy with Owen Wilson and Vince Vaughn as the targeted leads. The 1980s setting may be overblown and it will be all about madcap hilarity (and references to how it will all be better when a search engine gets invented).

I'm not saying it isn't material ripe for a comedy. I do think it is great material that could work in several genres (sci-fi or horror may be harder). I hope the writers and eventual helmer trust the true story enough and not be afraid to have a bit of depth and complexity. After that, we can finally get the long awaited "Where's the Beef" movie.
Coke Movies Musings News