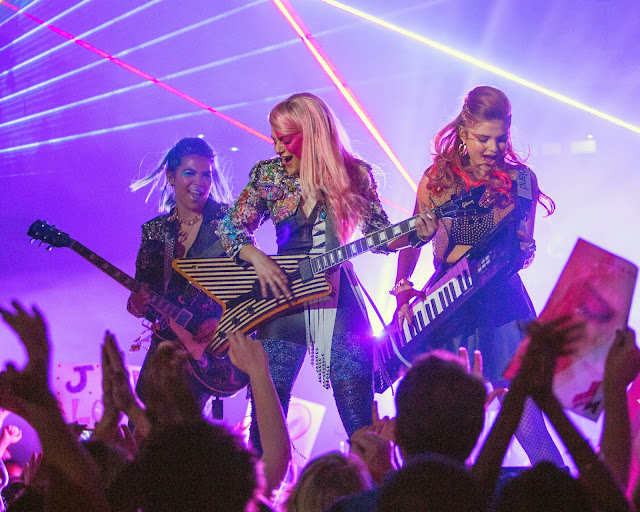 I've long accepted that movie studios will continue to mine popular or even vaguely remembered properties from the past in the hopes of "hey, I saw that on a lunchbox 30 years ago" reactions will suddenly trick someone into thinking they want to pay to see a modern movie adaptation. An original idea hasn't really ever existed in Hollywood, despite what many may moan or like to believe. The more annoying trend is taking a somewhat remembered movie or TV series or book and turning it into a movie that has shoved out almost everything that would appeal to its fanbase in an often misguided attempt to grasp the cherished 'broad appeal.' Thus I present to you the first Jem and the Holograms trailer.

Jem is a very distinct 1980s artifact that thrives on the trends and fads of that decade. So of course, this movie adaptation is set in modern times, likely for the same reason last year's Annie was: studios don't have faith their target demographic would pay to see something set in the past. This ignores the fact that their target demographic may not have ever even heard of Jem and so adapting the cartoon would be pointless for them. The demographic that would be nostalgic for Jem is at the same age that has made 1980s set series like The Americans, The Goldberg and Halt and Catch Fire popular.

Clearly, this movie is geared towards those who discovered Jem when their parents uttered it as an answer to a Trivial Pursuit question and then the parents wasted 3 minutes reminiscing about the cartoon. There is almost no attempt to make this feel or look like the animated series.

Where is the magical holographic computer Synergy?

What happened to the earrings that transform Jerrica into Jem?

Are we really going to have a movie without the Holograms rivals, The Misfits?

Did director Jon Chu or writer Ryan Landels ever see an episode of the series that was essentially a globe-trotting adventure about a female superhero who just happened to be a rock star?

Why am I spending time and words on something I never would have been interested to see?

Some of these major absences come from it being a micro-budget picture. This is one of the major reasons this was an odd movie to be backed by the deep-pocketed Blumhouse Productions. Instead of some zany rock star adventure, we get an independent feeling and looking feature with a standard story about poor kid gets discovered and needs to wrestle with new found fame. A movie that has been done about thousand times with clichés like the evil record producer (this time in the well-cast Juliette Lewis) whispering in the protagonist ear or the boyfriend that is there to ground and protect. It is pure formula that must even look tiresome to the teenage girls this trailer is trying to excite.

The heart seems to be in the right place. Chu stated earlier in the week the movie's themes and messages will be about the search to find your true self and staying loyal to your family and ideals. Those themes work great within the tale of finding rock star fame, but that is likely why it is has been used in every single small town musician strikes it big as the hottest new music act movie.

All the charm and distinctness of that campy series has been successfully rung out of this trailer. Okay sorry, we have the face paint and the glorious hair (and what looks like a keytar) but it lacks a high energy hair metal original song performed by the band or luscious candy-coated colours splashed all over it or any sense of zaniness or camp. An intimate and grainy story of a rocker dealing with fame is fine, but it sure as hell shouldn't be called Jem and the Holograms.

I know that Josie and Pussycats wasn't a financial or critical hit, but it at least had a sense of fun and was aware of its source material. This looks completely tone deaf to the reason and purpose of adapting a goofy and gloriously '80s animated series. Unfortunately, this is trailer is not truly outrageous.
Jem and the Holograms Movies Trailers